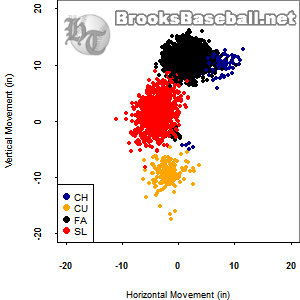 Kershaw throws with a deceptive, jerky delivery. His four-seam fastball sits in the low to mid 90’s, with some rising, cutting action. He generally works up in the zone with the pitch, producing an above average number of swings-and-misses. His slider is his big strikeout pitch, with a 2011 whiff rate that was slightly over 40%. The pitch generally sits around 82-85 MPH, with good late break. Kershaw’s 73-75 MPH curveball also misses a ton of bats, but he uses it much less frequently than the slider. He mixes in an occasional low 80’s changeup against right-handed batters to keep them honest. It does not appear that he has ever thrown a changeup against a left-handed hitter in his career. Kershaw battled the flu during his first start of the season, which dragged down his velocity and limited him to three innings. He was still mostly effective, but it could prevent him from pitching too deeply into Tuesday’s game as well. 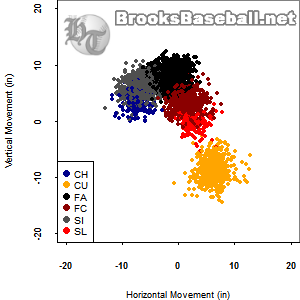 Billingsley throws with a high three-quarters delivery. His four-seam fastball sits in the low 90’s and touches 95 MPH. He also throws a two-seamer that is a tick slower and a cutter that ranges from about 85 to 93 MPH. The cutter shows quite a bit of movement, with well above average sink and horizontal break approaching that of a typical major league slider. Billingsley’s two-plane slider sits in the mid 80’s with above average break. His curve moves as much as any in baseball, with velocities ranging from the mid 60’s to the low 80’s. Billingsley’s whiff rate dropped below average last season for the first time in his career, which contributed to a corresponding drop in his strikeout rate. He struck out 11 in his first 2012 start against San Diego, so maybe his swing-and-miss stuff is on its way back. 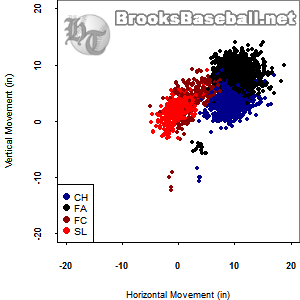 Capuano does not have flashy velocity, only throwing his fastball in the mid to upper 80’s. He releases from a three-quarters arm slot and hides the ball well, helping him to keep hitters off-balance. He goes to his upper 70’s changeup often, and has an above average whiff rate with the pitch. He also throws an occasional slider that sits around 80 MPH and a mid 80’s cutter. Despite the unimpressive velocity, Capuano has consistently posted above average strikeout rates in his career.