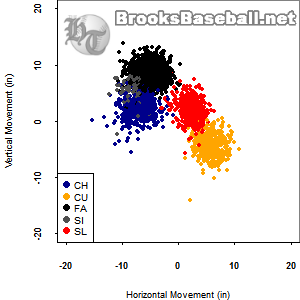 Cain pitches off his four-seam fastball, which generally sits around 90-92 MPH and touches 94. He often works up in the zone with the pitch, and he is not afraid to attack the middle of the plate with it. Occasionally, he mixes in a sinking two-seamer at similar velocity. He throws a slider and a changeup, both of which sit in the 85-87 range. Cain uses the slider predominantly against right-handed hitters, and does a good job of locating it on the outer half of the plate. He makes heavy use of the change against opposite handed hitters, commanding it well on the outside corner against lefties. He also goes to it relatively frequently against righties. Despite posting consistently well above average strikeout rates, he surprisingly does not miss a ton of bats. His whiff rate has generally sat around league average, and he does not really possess a standout strikeout pitch. 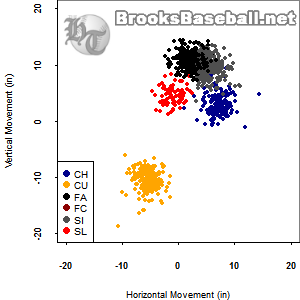 Zito’s velocity dipped pretty significantly last season, with his four-seam fastball dropping into the mid 80’s. It has been even slower at times, with him often struggling to touch 85 MPH. His two-seamer shows more horizontal break than the four-seamer, but it only flashes marginally more sinking action. Zito is famous for his big, slow, low 70’s curveball, but the pitch has been pretty hittable in recent years. He also throws a mid 70’s changeup and an upper 70’s slider. Overall, he does not miss many bats, as his four-seam fastball is his only offering with a whiff rate near league average. Zito missed a good portion of 2011 with foot injuries. When he returned to the mound in September, it appears that he moved from the third base side of the rubber to the first base side. 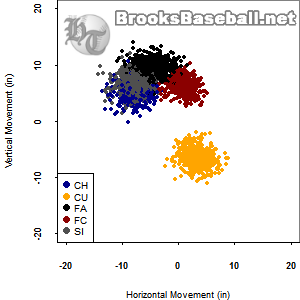 Vogelsong’s four-seam fastball sits at 91-92 MPH and touches 94. He generally uses it on the outer half against right-handers, while moving it around the zone against lefties. He throws a good sinking two-seamer with just a tick less velocity, using it to induce plenty of ground balls. He consistently throws the sinker on the arm side of the strike zone, busting righties in on the hands while staying away from lefties. Vogelsong commands his upper 70’s curve well, and gets a good number of swings-and-misses with the pitch. He does a good job of locating his upper 80’s cutter on the outside corner against right-handed hitters, and also mixes in a mid 80’s changeup.