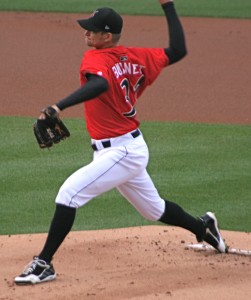 Right-hander A.J. Burnett will take the mound at Peoples Natural Gas Field in Altoona for the Double-A Curve on Saturday, baring any setbacks, for his final rehab start before rejoining the Pirates rotation.

Burnett, who threw 81 pitches during his third rehab start on Monday, will shoot for as close to 100 pitches as he can get.

“We’d like to see him go past 80 and as close to 100 as he can which it all being productive and efficient. That would be our goal,” Pirates Manager Clint Hurdle said.

After his start with the Curve, Burnett will travel back to Pittsburgh where he will rejoin the club during its six game home stand at PNC Park. Already eligible to come off the disabled list, Hurdle said they will evaluate where they plan on sliding him into the rotation.

“He had to hit a big pause button and now he’s been out throwing in a rotation time frame. Which is only going to help him repeating his delivery, maintaining him arm slot, all the things that he’s aware of, that’s he aware of coming over to us,” Hurdle said. “There comes a certain point in rehab starts where enough’s enough, and they’ve got to get back involved at the Major League level. The adrenaline can work very positive way in that frame. Him being back here hands on with our trainers, being back in this environment can help as well. I’m optimistic that baring any injury or setback that this will be the last one. Then we’ll figure out where he’s going to go in the rotation.”

During his last start, Burnett allowed five runs on seven hits over four innings. He walked four, and didn’t strike out a batter, and also gave up two home runs. In each of the first three frames, Burnett walked the leadoff batter. However, Hurdle said the results there don’t matter that much.

“You’re dealing with a whole different animal down there with A-ball hitters and big league hitters,” Hurdle said. “It sounds funny, but it’s real. If you follow these things, you see it. What we’re looking for is the crispness to his pitches, the location. Is he following the glove? Does he have arm side command? Is the ball sinking? What’s his slider doing? What’s his curveball doing? What’s his changeup doing?, and we go from there.”

Right-hander Jeff Karstens, who was placed on the 15-day disabled list with right shoulder inflammation, met with team doctors on Thursday and was told to rest his pitching shoulder for the next 7-10 days.

“We got the report,” Hurdle said. “We’re going to treat it, take care of him medically. There will be no throw for 7-10 days and then we’ll go back to building him back up.”

Karstens pitched one inning against the Arizona Diamondbacks on Tuesday and was replaced in the second frame by reliever Jared Hughes. Karstens allowed two runs on three hits over the inning of work. So far this young 2012 season, Karstens has posted a 4.50 ERA over his three starts.

Hurdle said there is no timetable currently for his return.

“That’s why we have trainers, that’s why they see the doctors,” Hurdle said. “We told you A.J. [Burnett] 8-12 weeks, looks like it’s going to be on the front end of that. We’ll take it one step at a time. He’s got to get well enough to throw first. Then we got to get him back out on a rehab assignment and start off on a number of pitches that we feel comfortable with, build him back up to close to 80-100. I can’t give you a time frame.”

Right-hander Brad Lincoln, Hurdle said, is tentatively scheduled to start on Monday against the Colorado Rockies at PNC Park in place of Karstens in the rotation.

Pirates closer Joel Hanrahan worked on fielding drills at PNC Park prior to the club’s 7:05 start against the St. Louis Cardinals. The  right-hander also worked on the same drills yesterday in Pittsburgh without issue.

There is currently no update on Hanrahan’s status on whether he will be eligible from the bullpen tonight. He has not pitched since Sunday in San Francisco when he felt tightness in his right hamstring while pitching up the save.

“I can’t answer that right now,” Hurdle said prior to the game. “He’s out working on the field right now, going through pitchers fielding practice, which is going to be a part of him needing to be able to accomplish that. Getting off the mound, when they put down a bunt, covering first base. Yesterday he did it. He had a good work day yesterday and reported no ill effects today. We can’t recreate a closing situation or a game adrenaline, anything like that, but we’ll factor in the information that we’ve got and decide whether he’s able to go or not. You’ll know when it’s time. You’re used to seeing him up, so if he’s up, we’re going to give it a shot. If not, you ‘ll know that we’ll try to buy him another day.”

If Hanrahan is not available tonight, right-hander Juan Cruz could get the call if the Pirates need a closer. Hurdle said he will go more on matchups if that situation rises.

“We’re trying to look at the matchups more than anything else,” Hurdle said. “He’s handled the first two opportunities extremely well. We might look to him first, but we’ll wait and see.”