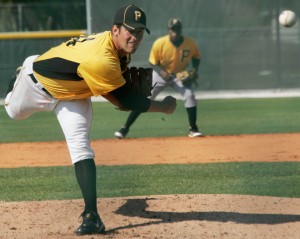 ALTOONA, Pa. — Right-hander Brandon Cumpton has been solid in his first year at the Double-A level. His last trip to the mound on Saturday in Erie, Cumpton allowed five earned runs for the first time since April 7, his first start of the season. In the six starts between, Cumpton hadn’t allowed more than three earned runs.

Cumpton had another strong start tonight. He allowed one run on seven hits over seven innings. He walked three and struck out two while throwing 94 pitches, 54 strikes. The Curve turned three double plays behind Cumpton in his seventh start of the year. He was able to limit the damage and battle through base runners in each of his seven frames.

The lone run scored off Cumpton in the first. After issuing a four pitch walk, the right-hander attempted to pick off the runner at first, but his throw to first sailed past the bag for an error. With two outs, Cumpton gave up a RBI knock into center field to plate the run.

“I thought that his fastball had some life to it tonight and the mix that he had,” Manager P.J. Forbes said. “He got his changeup involved tonight. Threw some good breaking balls. In Erie, it was pound them in. Here we went both sides of the plate…I thought he did a great job when he faced a little adversity to make pitches and that’s what it’s all about. To pick up the ball behind him when we did very nicely.”

Second baseman Jarek Cunningham fresh off the disabled list (left wrist) on Friday contributed to the Altoona Curve’s 3-1 win over the Erie Seawolves.

Trailing Erie 1-0 in the bottom of the third inning,  Cunningham ripped a two-run double into the gap in right center field with one out. The club tied the game at one with Brock Holt’s RBI knock the at-bat prior.

Cunningham also showed off the glove by making a running grab on a grounder hit up left of the second base bag and made a perfect twisting throw to first to nail the runner for the out.

“I’m glad he’s back,” Forbes said. “I’ve watched him take BP and there’s no pain in that wrist. He looks like he’s back to full strength. I think getting back up here, you got a little extra step in there in your bounce. Now, it’s back to back to everyday here. Him setting in and continuing to do the work that he was doing when he wasn’t able to swing. He did some outstanding work defensively when he couldn’t swing. That’s all he focused on. I think we saw a little eminent of that tonight.”

Colla Moved to the ‘Pen

Right-hander Michael Colla has been moved to the Curve’s bullpen after the club decided to move Tim Alderson into the rotation. Colla posted an 0-4 record and a 5.15 ERA over seven starts this season. The 25-year-old spent the majority of 2011 in the rotation where he posted a 3.70 ERA over 29 starts (133.2 innings).

The righty earned the save on Tuesday after pitching three scoreless innings in his first appearance in relief. On Friday night in Altoona, Colla allowed one run (unearned) on two hits over 1.0 inning with a strikeout.