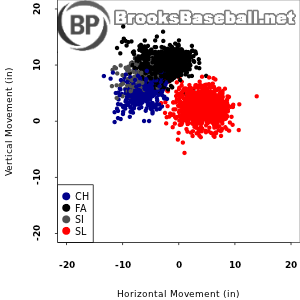 Norris has good life on his fastball, throwing it in the low 90′s and occasionally touching 95 MPH. His velocity was down a tick early in the season, but it has crept back up in his past few starts. He also throws a slider in the mid to upper 80′s and a changeup in the mid 80′s. The slider is his big swing-and-miss pitch, with a whiff rate of about 45% so far in 2012. The fastball has slowly become more hittable over the years, and has not missed many bats this season. Norris’ strikeout rate is comfortably above average this year at 20.1%, but is down a bit from his career high of 23.1% in 2010. 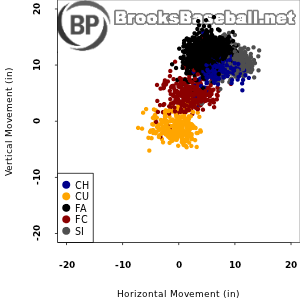 Happ possesses a pretty diverse repertoire. His fastball generally sits around 90 MPH, and shows good arm-side movement when he goes to the two-seamer. He occasionally dials it up to the 93-94 range with the four-seamer. He also throws a changeup in the low 80′s, a slider/cutter in the mid 80′s and a slow curve in the mid 70′s. Happ misses a good number of bats with his fastball, but his secondary stuff is pretty hittable. He tends to work up in the zone, which leads to plenty of fly balls. He also struggles with his control, leading to below average walk numbers. 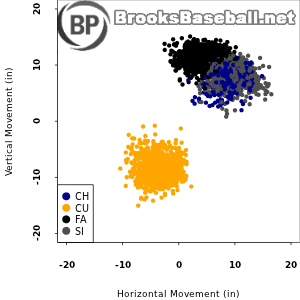 Rodriguez throws his fastball in the 88-90 range, maxing out around 91-92 MPH. He moves the four-seamer all around the zone, while mostly using the two-seamer on the outer half. He frequently goes to his spike curveball, which sits in the mid to upper 70′s and generally shows good downward break. Rodriguez also throws a low to mid 80′s circle change, which he uses to keep right-handed batters honest. He does not miss many bats with his secondary offerings, but his fastball has historically been difficult to put in play despite the underwhelming velocity. Rodriguez generally gets a good number of his ground balls on the curve, although that has not really been the case so far in 2012. His strikeout rate is down pretty significantly early in 2012, after consistently sitting well above average the past several years.