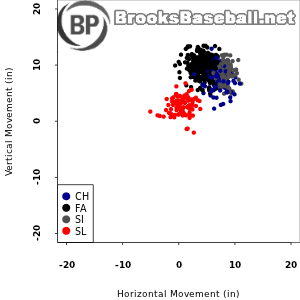 Santana is in the midst of a very successful return from shoulder surgery that caused him to miss the 2011 season. He no longer possesses the low 90’s fastball from a few years back, mostly sitting around 87-88 MPH. He also throws a two-seamer with good arm-side tail. He is having a great deal of success with his notorious changeup, with a 2012 whiff rate over 45% with the pitch. The pitch’s velocity ranges anywhere from the mid 70’s to the low 80’s. The large separation between his fastball and changeup velocity makes the pitch very effective. Santana’s only breaking pitch is a low 80’s slider, which he uses mostly against lefties. He is missing bats with each of his pitches this year, and is currently sporting his highest whiff rate since leaving Minnesota. 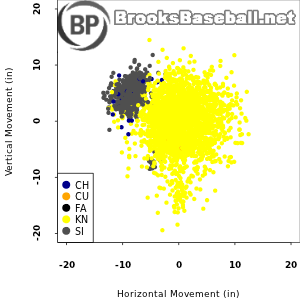 Obviously, Dickey is unique in that he is a knuckleball pitcher. The velocity of the pitch varies so much that he is essentially throwing two different versions, a fast knuckleball and a slow knuckleball. The velocity of the fast knuckler ranges from the upper 70’s to the lower 80’s. The slower knuckler is generally somewhere between the upper 60’s and the low 70’s. There is some overlap on the two pitches in the mid 70’s, making those pitches difficult to identify. As you can see from the chart above, the knuckleball breaks completely randomly. His fastball velocity is higher than that of a typical knuckleball pitcher, as the two-seamer sits in the low to mid 80’s. Here are a couple of more detailed articles on Dickey’s approach, written during the 2010 season. 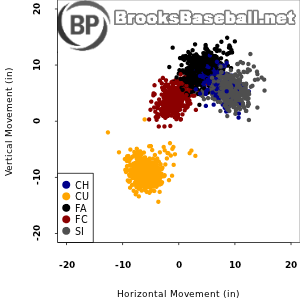 Niese throws a four-seam fastball that sits around 90-91 and maxes out at 93 MPH. He also throws a sinking two-seamer at a similar velocity with good movement. The southpaw mixes in an upper 80’s cutter that breaks fairly similarly to a typical slider, using it mostly in on right-handed batters. His primary breaking ball is a big, slow mid 70’s curveball. He also throws an occasional mid 80’s changeup against right-handers. Niese does not miss many bats with any offerings other than the fastball, but he generates a ton of ground balls with each pitch type. The curveball leads the way in that category, particularly this season. In 2012, Niese’s curveball has been hit on the ground 80% of the time it has been put in play.