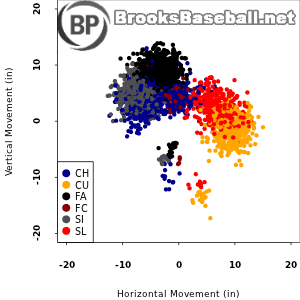 Arroyo has success by keeping hitters off-balance. He throws about six different pitches, most of which come in at slightly different velocities. He does not throw very hard these days, as his four-seam fastball sits around 86-87 MPH and tops out at 89. He throws a sinker around 87-88 MPH with tailing movement, a mid 80’s cutter, a mid 70’s slider, a low 70’s curve and a changeup around 80 MPH. Arroyo mixes his pitches thoroughly, going to each of his six offering at least 10% of the time. He switches up his release point frequently, and often drops down almost to sidearm when throwing his slider. All of his pitches are very hittable, although his slider has missed a decent number of bats in 2012. 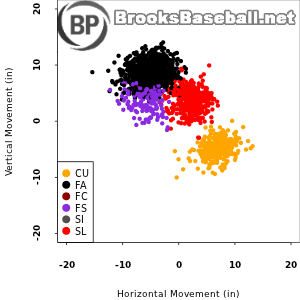 Bailey’s fastball sits in the low 90′s and can get up to the 95-96 range on occasion. He throws a hard upper 80’s slider, which he has gone to a bit more frequently the past few years. He also throws an upper 70′s curve and a mid 80′s splitter. The slider has been more effective with increased usage, missing more bats in recent years. His curve and splitter have also generated comfortably above average whiff rates so far this year. Bailey generally attacks right-handed batters with the fastball/slider combo, while varying his pitches much more against lefties. 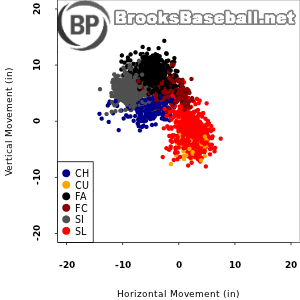 Cueto is a power pitcher who throws in the low 90′s and touches 95 MPH. He generally locates his four-seam fastball on the glove-side of the plate (inside to left-handed batters and outside to righties) and his two-seamer on the arm-side. His fastball is a solid strikeout pitch, but his secondary stuff is pretty hittable. His main secondary offering is a slider that sits in the low 80′s. Cueto generally sticks to the fastball/slider combo, mixing in an occasional mid 80′s changeup. He may also throw a cutter and curve on rare occasions, although it’s difficult to say that conclusively.