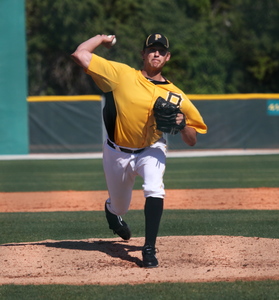 PITTSBURGH, Pa. — Jared Hughes started the 2011 season in the Altoona rotation, making 11 starts before being turned into a reliever. He has since thrived in the reliever role.

Hughes went on to make 35 relief appearances with Triple-A Indianapolis where he posted a 2.11 ERA, before getting a September callup with Pittsburgh. He made his Major League debut on September 7, where he tossed 1.1 innings of scoreless relief. Hughes went on to toss seven more scoreless frames before giving up his first earned run in his Major League career. Overall, Hughes appeared in 12 games before last season ended. The experience of pitching in the big leagues has helped his confidence on the mound in 2012.

“I think having it under my belt and being able to know that I can compete at this level was big,” Hughes said. “So, coming into this season with that level of experience allowed me to really focus on just going out there and competing.”

“If you’ve never been to the big leagues, you don’t what the big leagues are,” Pirates Manager Clint Hurdle said. “You don’t know what it’s about. You don’t know really how to tackle it until you get here. You realize, you know what? We’re playing the same game, same field. The player pool is better. Stadiums are bigger. There’s more media. I think once you get through what it’s all about then you realize what you need to pay attention to, where you’re focus needs to be.”

“I think he understands he likes it here. What does he need to do to stay here? He needs to stay focused. Be aggressive on the mound. Fire that sinker. Work on the development of the slider. Throw strikes. Keep the ball down. Keep the ball on the ground. He’s been very focused. He works extremely hard in preparation and conditioning. He’s got a very resilient arm. And he loves to compete.”

Hughes came into spring training fighting for a spot in the Bucco bullpen, despite having only 11 innings of previous experience in the majors. But the righty impressed Hurdle during Grapefruit League action and broke camp with the Pirates for the first time in his professional career.

“He came in with an outside chance, and all he did was continue to take the ball, continue to sink it and get outs throughout spring training,” Hurdle said. “He’s continued to do the same thing at this level in a bunch of different roles. He’s been very effective out there.”

The rookie has been impressive on the mound so far this year. Hughes has a Major League leading 1.16 ERA among rookies this season. He’s also made 10 straight scoreless appearances (11.2 innings) and picked up his first Major League win on Monday against the New York Mets, tossing a scoreless frame while walking one, striking out one and giving up a hit.

Hurdle has been able to use Hughes’ versatility to his advantage. A former starter, Hughes can pitch in long relief, situational and even high-leverage situations. And he’s handled them all very well. The right-hander came in the sixth inning in the Pirates 1-0 win over the Chicago Cubs on Friday night at PNC Park with two runners on and just one out. Hughes was aggressive, went right at the Cubs, and induced two groundouts to keep the one-run lead in tact.

“It definitely kicked in as I was relieving,” Hughes said of his aggressiveness on the mound. “When I was a starter I had to pace myself a little bit more. I couldn’t give it as much energy, or else I wouldn’t be able to go as deep into the game. I think as a reliever I was able to just go in and be aggressive. Not have to worry about pacing myself. That’s the mentality –just being aggressive, competing and not holding back.”

“I’m going to do whatever they tell me to do. If it’s huge for us or whatever, I just know that I’m going to be ready at any point in the game so that when that phone rings, it could be me. That’s what I’m thinking. It could be me, and I’ll be ready to go if they need me right now.”

Hurdle said he doesn’t like to get caught up in projecting what he believes players could be. But if Hughes continues to impress, he very well could continue to see high-leverage situations with the game on the line.

“I’m a bigger fan of just giving them a chalkboard and working with them to draw up and see what they can become,” Hurdle said. “It will be interesting to see how the arm continues to play out. Sometimes you see growth spurts even with a guy that’s pitching in the big leagues. Is there more velocity there? Will he get stronger? How’s the resiliency going to hold together? He’s capable of pitching three days in a row right now, which is special. He’s already done it once. That’s not something I want to continue to tackle.”

“Does the slider just continue to be an addition partially on the plate, or a weapon? He’s thrown some good ones. He’s thrown some that he’s still working on. He continues to work on a third pitch. Not that it’s necessary. Just to see where he takes it.”

That third pitch, Hughes said, is coming along good. If the righty can add another solid pitch to get ground balls, it will make him even more effective.

“My changeup would be my third pitch,” Hughes said. “I’m definitely working on keeping it down. If I can keep it down and get the guys to swing the bat. That’s what that pitch is for starting a new bat. If they can swing at it and its down, then I’m probably going to get some ground balls out of it.”

Hughes has already appeared in 17 games from the ‘pen, and his 23.1 innings is the most out of the bullpen. Hurdle said he will keep an eye on his outings this season, because he knows the potential the arm has for many years to come.

“I’m tied to the arm as well as the human being,” Hurdle said. “It’s not all about for me, well, if I can get 80 appearances out of him this year and we can win X amount of games and that’s what it’s all about. If he can pitch again after that, then so be it. I think there’s got to be balance in everything we do. And that’s what I’m trying to keep in mind with him in particular. I’m looking at him for the long haul. Very valuable guy to have out there.”