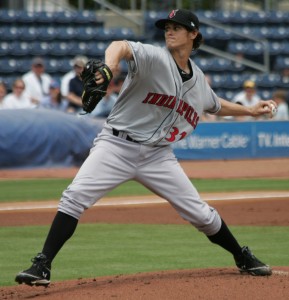 PITTSBURGH, Pa. — On Monday afternoon rookie Jeff Locke watched alongside Pitching Coach Ray Searage as right-hander A.J. Burnett threw a bullpen at PNC Park. The 24-year-old, who was recalled on Sunday from Triple-A Indianapolis has learned a lot from the 35-year-old vet during his time since joining the club, as well as during spring training.

Locke’s time in Pittsburgh isn’t expected to last long. The left-hander replaced righty reliever Jason Grilli, who was placed on the bereavement list. Locke, who has been a starter in all but nine of his 130 appearances in the minor leagues, will come out of the bullpen if he makes an appearance.

Locke realizes his time might be a quick trip, but is soaking up the opportunity while he’s here.

“Just trying to instill the confidence while I’m here, ” Locke said. “Whether you’re here to fill in, whether you’re here because you are, either way you’re here in the Major Leagues because the organization has trust and belief in you. And that’s the biggest thing. It feels good to get that call, to be that guy that they want to have come up here, that they have confidence in.”

“If I need to come in and fill a void for three, four innings, then I can be able to do that. Obviously that’s going to make you feel confident that the organization believes that. Speaking with [Manager] Clint [Hurdle] and [Pitching Coach] Ray [Searage] and everyone since I’ve been here, they’re confident in me. If I get an opportunity to pitch, it will be exciting.”

Hurdle said he will not be used as a situational lefty or in short relief, but if a starter exits early, the left-hander will be called upon for long relief from the ‘pen.

“We’re just looking for continued growth,” Hurdle said. “He learned a lot of valuable lessons as well last year to come up from the levels that he was pitching at and to face the hitters he was able to face, meaningful games for a lot of people in September, so they were hungry. See his composure, mound presence, we’ll look for those kind of things. That’s what I’ll keep my eye on.”

The 24-year-old was a September call up after starting the 2011 season at Double-A Altoona. The lefty made 23 starts before being promoted. And after just five at the Triple-A level, made the jump to the Majors. Locke made four starts to end the year allowing 12 runs on 21 hits over 16.2 innings. He walked 10 while striking out five with Pittsburgh.

Overall with Altoona and Indianapolis in 2011, Locke posted a combined 3.70 ERA while ranking second among all Pittsburgh farm hands in strikeouts (139) trailing only right-hander Kyle McPherson, who had 142.

In the offseason and during spring training, Locke worked on a new delivery. Lefty Ted Lilly of the Los Angeles Dodgers, Locke said, was whom he modeled himself after. The new turn allows Locke’s back to be completely turned (where you can read his name and number on his jersey) before turning to the plate before he delivers.

“It was kind of a little bit of Ray, a little bit of [Special Assistant to the General Manager] Jim Benedict,” Locke said of his new delivery. “Just trying to add a personality. Not really add anything mechanically to make me any better. It does add a little bit of deceptiveness, from what some of the hitters have told me that I’ve thrown against on my own team and stuff.”

“It helps me get my hand out of my glove a little sooner, how I get on top of the ball and throw the ball downhill. So it’s been a good transition so far. With most mechanical changes, I feel like I can adjust to those pretty quick. Everything is good with it. It feels good. I’m confident with it so I’m going to keep rolling with it for a while.”

With the new delivery, Locke has found success at Triple-A. The lefty has gone 3-3 with a 3.02 ERA over eight starts. He’s whiffed 36 batters while walking 10 over 47.2 innings. Locke tossed a combined 14 scoreless frames over two starts on April 30 and May 5 before allowing five runs over a 5.2 inning outing against Lehigh Valley. He bounced back, however, and allowed two earned runs over 7.0 innings with six whiffs before being promoted on Sunday.

“I feel like earlier on in the year I was giving up quite a few hits,” Locke said. “Towards my fourth, fifth, sixth start, the hits started to minimize a little bit in the good outings. I started to get ahead of more guys, be able to put guys away. The outings started to come together. The first two of the season weren’t too good. But they got better after that.”