Bryan Morris Finally Gets the Call to the Majors, Though Only For a Short Stay 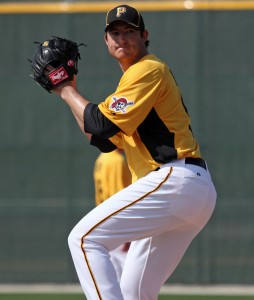 PITTSBURGH, PA — When Bryan Morris arrived to the field in Indianapolis on Saturday afternoon, the right-hander went about his normal pregame activities. That was until Triple-A trainer Bryan Housand told him to go to the Manager’s office.

“[Dean Treanor] sat me down and he just looked at me and said, ‘Are you ready to go tonight?’ I said, ‘Yes, sir.’ And he said something about the bullpen catcher, and he was like, ‘well, the big league bullpen catcher is pretty good.’ It shocked me at first. I was like, ‘Wait. What did you just say?’ He’s like, ‘Yeah. You heard me.’ He got up, shook my hand and actually bear hugged me. It was a pretty intense moment. It was good, it was exciting,” Morris recalled in the Pirates Major League clubhouse on Sunday.

The first person Morris shared the news with was his wife, Chelsea, who was at the ballpark. The next were his parents.

“They were excited,” Morris said with a smile. “It’s been a while since I’ve actually heard my Dad cry. It was a touching moment. It’s been a whirlwind, but its been a lot of fun.”

Prior to the game on Sunday afternoon, the Pirates announced that they promoted Morris to the Majors. The 25-year-old flew into Pittsburgh on Sunday, and made it to the field and changed into his big league uniform just before the game started against Detroit.

And he’s earned the opportunity at this level. Morris posted a 2.28 ERA with five saves and 44 strikeouts in 23 relief appearances for Triple-A Indy this season. After a rough April, when he sported a 5-plus ERA, he’s been very effective. Since the beginning of May, Morris has allowed five runs over 33.2 innings (1.34 ERA) and just one run over his last 17.0 frames.

“Lately I think I’ve done a pretty good job of throwing my fastball down in the zone and attacking the hitters,” Morris said. “Just trying to get them out as quickly as possible so I can get in and out without letting my defense get too tired. It’s seemed to work out for me really well lately, so I hope I can keep that going.”

The first round pick (26th overall) from the Los Angeles Dodgers in 2006 was acquired from Pittsburgh in the three-team Jason Bay trade in 2008. After spending the majority of his professional career as a starter, Morris was moved into the bullpen mid-June last year after struggling over his first six starts with Double-A Altoona.

Morris’ solid season finished with a 2.05 ERA in 26 games (52.2 innings) from the ‘pen. He didn’t surrender a home run in his last 46.1 innings and posted just a 1.57 ERA over his final 23.0 innings. Already on the 40-man roster, the righty didn’t get a September callup, but he did get the opportunity to observe with the big league club to reward him for his successful season. Morris, along with four other players, spent the afternoons just as the Major Leaguers did, took batting practice and worked out with the team, but they didn’t suit up.

After he was cut from big league spring training camp in March this year, Morris was told he would remain as a reliever after thriving in the role, but start the season at Triple-A Indianapolis.

“There is some that feel that Bryan may be able to start at the Major League level, but it simplifies everything for him,” General Manager Neal Huntington said. “He can be aggressive. He doesn’t have to pace. He can let his stuff play. It’s a fastball. It’s a curveball and a slider that both can be out pitches for him when he’s aggressive. Fastball command is the key to his success, but we felt like Bryan was able to come up here and pitch if needed. But if not, give him the experience and put him that much closer to being able to help us.”

“Being a reliever for me, I just feel like I’ve got more of a ‘go get them mentality’,” Morris said. “Just get after the hitter a little bit more aggressive and not worry about running out of gas or anything like that. That’s played a big role for me so far.”

Morris throws four pitches, but primarily unleashes a fastball, curveball and a slider that he transformed in to more of a cutter this year. The latter pitch has been used as a strikeout pitch. He’ll mix in an occasional changeup against a left-handed hitter.

“The slider is a hard, sharp, late diving pitch that has effect for him,” Huntington said. “The curveball is a little bit more strike breaking ball that he can sharpen for a chase. The fastball is going to be key for him.”

Morris wasn’t used out of the bullpen on Sunday, but could make his Major League debut over the next few days in Philadelphia. While his stay in the Majors may be short at this point in the season, Morris is looking forward to the opportunity and experience.

“We felt it was a good opportunity to get Bryan up here for a couple days,” Huntington said. “It’s probably going to be a short-term move. He’s been told that, but at the same time he gets to experience the big league environment.”

“This has been my dream my whole life so I’m just taking it day by day,” Morris said. “Just letting it all in and enjoying every bit of it. As long as I’m up here, I’m going to work my butt off and do what I can do to help the Pirates win ballgames.”