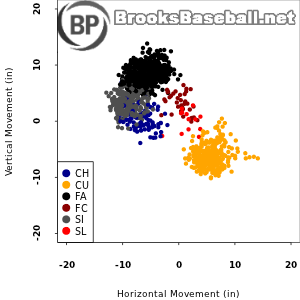 Lynn is a hard-throwing, 25-year-old right-hander that misses plenty of bats, which has led to excellent strike out numbers early in his major league career. He mostly throws his four-seam fastball in the 92-93 range, occasionally touching 95 MPH. He reached as high as 97 MPH while pitching in relief last season. The pitch has been pretty untouchable to this point, with a whiff rate that stacks up well with some of the best fastballs in the game. Lynn throws from a low three-quarters arm slot, which gives his 91-93 MPH sinker plenty of movement. The sinker misses a lot of bats, while also generating a ton of ground balls. His big, slurvy 78-80 MPH curveball is a solid pitch with considerable horizontal movement. Lynn mixes in an occasional 83-85 MPH changeup with good sinking movement, almost exclusively against left-handed batters. He also appears to throw a rare upper 80′s cutter. Lynn tends to work up in the zone with his four-seamer. He mostly uses the sinker against lefties, locating it down and away. He has done a very good job of keeping his secondary offerings down, very rarely leaving a curve or change in the upper half of the zone. The image below shows the locations of each of his 2012 changeups against left-handed batters, courtesy of FanGraphs (reminder: these are from the catcher’s point of view). Lynn has faced the Pirates twice in 2012, allowing three runs in 13.2 innings.