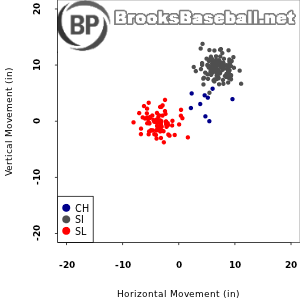 Valdes is a reliever up from Triple-A to start tonight’s game because the Phillies do not have a viable starting pitcher after playing a doubleheader on Sunday. Valdes is making just his second career start, with the first coming late in 2010 with the Mets. I am not sure how long the Phillies plan for him to go, but it’s worth noting that he has mostly pitched multiple innings at a time this year. As you might expect from a reliever, Valdes has a pretty limited repertoire. He throws a two-seam fastball with decent movement in the 87-89 MPH range, and has not managed to cross the 90 MPH barrier while in the big leagues. His primary secondary offering is a slurvy pitch in the upper 70’s. He also mixes in an occasional mid 70’s changeup, a pitch he has used infrequently out of the pen. Valdes does not have the flashiest stuff, but he misses a lot of bats and has been very effective in both the Philadelphia and Triple-A bullpens this season.