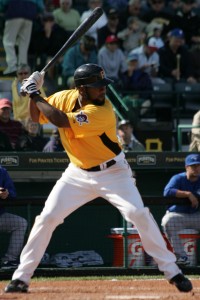 The Pittsburgh Pirates announced today that infielder Yamaico Navarro was arrested for drinking and driving on Wednesday night while in Indianapolis.

The Pirates had a joint statement from Indianapolis Indians  General Manager Cal Burleson  and Pirates GM Neal Huntington on the issue.

“The Indianapolis Indians and Pittsburgh Pirates regret that Yamaico Navarro was arrested for driving under the influence in Indianapolis on Wednesday night. We are thankful that this situation did not result in injury to anyone or in damage to any property. Yamaico Navarro has spent one night in jail, and will be disciplined upon his release. The Pirates are currently working through the process of that discipline. Yamaico Navarro will be offered an evaluation and appropriate counseling by the Pittsburgh Pirates in an effort to see that this situation does not occur again.”

Navarro broke camp with Pittsburgh out of spring training and hit .178/.255/.244 over 25 games with the Pirates. He was acquired from the Kansas City Royals on December 7, 2011 for right-hander Brooks Pounders and infielder Diego Goris.