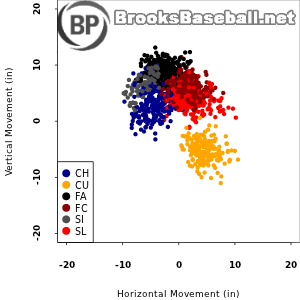 Marcum generates plenty of swings-and-misses despite underwhelming velocity. His fastball sits in the 86-87 MPH range, and has yet to touch 90 MPH in 2012. He has a deep arsenal and does a good job of mixing up his offerings. He has gone to his 78-82 MPH changeup less frequently this year than in the past, increasing the usage of his 79-82 MPH slider in the process. The difference has come in his approach against right-handed hitters. Marcum has historically used his change pretty frequently against righties, which is unusual for a right-handed pitcher. This season, he has mostly scrapped the change against righties, leaning heavily on the slider in those situations. The changeup remains his best weapon against lefties. Overall, the change and slider are his two best strikeout pitches, with whiff rates that are well above average. Marcum also throws a slow curve around 72-75 MPH and an 84-87 MPH cutter. The cutter is also a good swing-and-miss pitch.