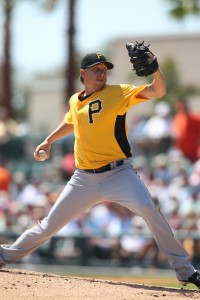 It’s been two weeks since the last time Kevin Correia made a start for Pittsburgh. He was moved into the bullpen when the club acquired Wandy Rodriguez a few days before the trade deadline. Correia made one appearance during that span in relief, where he struggled and allowed four earned over two frames, in adjusting to the new role. Not since when he was with the San Francisco Giants from 2003-08 had Correia been used in long relief or spot starting.

Correia said the adjustment has been challenging, although it didn’t seem to affect him as he tossed a quality start on Wednesday against Arizona.

“Correia going out there with as little as he’s pitched in the last couple weeks is just absolutely enormous,” Neil Walker said. “I don’t think people understand how difficult that is. He’s been in a tough spot. The thing about it is, he wants to win. He was excited about this opportunity today. He went out there and gave it his all. That’s all we can ask. He did a great job and he kept us in the game.”

The first inning was shaky for the right-hander, who said he didn’t really do much other than keeping his arm loose, to prepare for the start.

Stephen Drew led off the first inning with a double down the right field line. His next batter hit an infield single to third base, which Pedro Alvarez attempted to snag on a running grab but couldn’t come up with it cleanly. Chris Johnson picked up the third straight hit off Correia, a single to right which drove in the first run. A sac fly plated the second of the frame.

Correia bounced back with a scoreless second inning and went on to retire eight straight before giving up an infield single to start the fourth. He was able to escape the inning unscathed until the fifth.

Two more runs (one earned) scored off Correia in the frame. Parra drew a leadoff walk and advanced to second on the sacrifice bunt. After issuing his second free pass of the inning, Correia gave up an RBI double to right field.  An error by third baseman Pedro Alvarez allowed the fourth run to cross home plate.

Overall, Correia allowed three earned runs on six hits over six innings. He walked three and struck out five while throwing 90 pitches, 60 for strikes.  Correia picked up his seventh straight win in the Pirates 7-6 edge over the D-Backs.

“I’d like to win all of them in a row,” Correia said. “Obviously, every game I got out there, I’m going to try and win. It’s a nice streak. It just shows how good we’ve played in my games, and how good the bullpen’s pitched. To be able to win seven in a row, I don’t care how good or bad you pitch, it’s tough to do.”

Despite pleasing Manager Clint Hurdle with his performance, Correia knows that he will return to the bullpen after a few days of rest and be called upon for long relief, and perhaps another opportunity to spot start down the road.

“We’re here to please the people who make the decisions on when you get to play or when you don’t,” Correia said. “Obviously I haven’t pitched in a couple weeks in a start, but my stuff felt pretty good. Just still trying to work on all the pitches that you need to work on to be a starter for the last two weeks. For the most part, I feel like I’ve had it when I’ve needed them.”

“I actually think that overall he pitches maybe even better than the line,” Hurdle said. “He pitched I thought well. Kind of similar to what we saw back when he was rolling in the rotation. Maybe a challenge early, settled down, string out some zeros. I thought he competed very well…I was proud of his effort tonight.”

Walker Blasts Career-High 13th Long Ball; Mercer Picks up His First of His Own

The Pirates broke out the lumber against Ian Kennedy and the D-Backs over their first several innings.

In the first inning with two outs and two on, Neil Walker took a 2-2 changeup and launched it into the seats in right field for a three-run shot. It marked his 13th long ball of the season — which is a career-high. Walker hit 12 long balls during the 2011 season. He also came through by roping a two-run double into the north side notch to drive in his fourth and fifth RBI’s of the night. It marked his third career five RBI night, and second of the season.

“I knew my power would develop as time went along,” Walker said. “I’m seeing the ball good right now. I’m swinging the bat well. I’ve had a good month and a half here. Trying to keep grinding it out, swinging the bat. When you’re hot, you just want to keep swinging the bat, so matter what’s thrown up there, just take a hack. That’s what I’ve been doing.”

“When you’re seeing the ball good, you just want to get the barrel to it. When you pull it here at the Clemente wall with 320 down the line and you get it in the air, you’ve got a pretty decent shot. It was one of those ones where maybe a little luck helped me out.”

The next Bucco to lace a shot into the seats was from Starling Marte. For the second straight night, the rookie blasted a home run, this time on a 2-1 slider for his fourth home run already this season.

Another rookie swung the lumber on Wednesday. Jordy Mercer took a 2-1 cutter from right-hander Josh Collmenter for his first Major League long ball.

“He left the pitch up and I put a good swing on it,” Mercer said. “The rest is history. It was fun…When I looked up and saw Luis’ hand up, and he was going to slap my hand before I hit first base, that’s when I knew it was gone. That was pretty cool…I’ll remember that for the rest of my life.”

Presley Sent to Triple-A to Get More At-Bats

When the Pirates acquired Travis Snider from Toronto, Alex Presley’s role with the team was expected to be cut drastically. The outfielder was pushed to the bench to serve as the fourth outfielder, not seeing everyday playing time. When the time came to send a position player down for Locke, Hurdle said they wanted to give Presley some more every day at-bats and the opportunity to sharpen up his game.

Presley went 2-for-4 with a triple in his last start on Saturday, but had just three hits in his last 17 at-bats.

“Whoever we were going to send down, it’s an opportunity and put some games together, get some at-bats, just sharpen up their tools,” Hurdle said. “And that’s what was explained to him. It’s not a lack of anything other than we need more depth in the pitching side of it right now.”