Exploring the Arsenal will run prior to each game, providing you with a brief scouting report on the starting pitcher expected to oppose the Pirates. The chart below shows the horizontal and vertical movement of every pitch thrown by that particular pitcher in 2010. This chart is from the catcher’s point of view. Click here for a general guide to pitch types and classifications. Graphs are courtesy of Brooks Baseball and The Hardball Times , unless otherwise specified. Statistics are courtesy of FanGraphs . 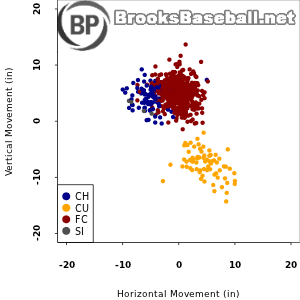 Mejia is making his second major league start of the season, after spending most of the year in Triple-A working back from his 2011 Tommy John surgery. The 22-year-old has a great arm, with a cutting fastball that sat 93-97 MPH and touched 98 MPH before the injury. In his limited time back in the big leagues, it seems that his velocity has completely returned. Mejia also throws a hard 85-90 MPH changeup and a 78-82 MPH curveball. He spent a good portion of the 2010 season pitching out of the Mets’ bullpen as a 20-year-old, and has mostly alternated between starting and relieving over the past two years. Despite the great raw stuff, he has not missed many bats in the majors, posting a well below average strikeout rate in his 45 career innings. Mejia often struggles with command, possibly due to an inconsistent release point.