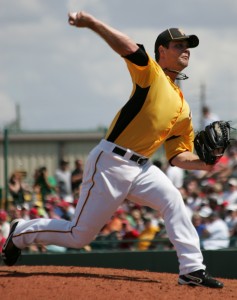 Kyle McPherson may have only thrown 20.1 innings in the Majors before taking the mound on Saturday night in Pittsburgh, but the 24-year-old looked nothing like a rookie against the National League Central best Cincinnati Reds.

Looking to make a lasting impression in his final start of the 2012 season, and to put himself into conversation for a spot in the Pirates rotation out of spring training next year, McPherson was impressive in just his third big league start with Pittsburgh, tossing six scoreless frames against a tough Reds lineup.

“It’s big,” McPherson said. “It’s definitely a huge step forward. I had some shaky starts, not getting through the fifth inning…I definitely got a boost of confidence from it. I’m looking forward to next year and hopefully turn some heads along the way.”

“I think there’s more there, but that’s the guy we’re talking about,” Manager Clint Hurdle said. “This is the guy that we’ve seen pitch downstairs. To pitch six complete up here after what he’s been through his first few starts, big step forward…He went six innings. He went through a Central Division Champions lineup. He’s got what you’re looking for. It’s just got to be added some sprinkled experience on with it. Tonight was a big step for him.”

McPherson worked himself into a jam to start the game, but was able to work himself out of it unscathed retiring the heart of Cincinnati’s lineup. Back-to-back singles from the Reds’ started the first frame, and a groundout from Joey Votto pushed both runners to second and third. But after getting a pop out to first base for the second out, McPherson got Jay Bruce to ground out to leave both runners stranded.

“He just came out there to slow the game a little bit and give me a little breather,” McPherson said of what pitching coach Ray Searage told McPherson after the jam in the first. “Just told me to continue to make some good pitches and you don’t have to be too fine with that guy in the box. Go out there and be me and keep attacking.”

McPherson went on to retire nine straight, which included three straight whiffs. The streak was snapped after Votto drew a leadoff walk to start the fourth. McPherson retired his next three straight, however, to leave him stranded and keep his scoreless outing intact.

McPherson didn’t allow another hit until two-outs in the fifth to pitcher Mike Leake, who doubled into the notch in left center field. McPherson’s fourth and final hit allowed in his third start of the season came in his final inning of work in the sixth. The out-out single from Votto was erased by an inning ending double play.

“I just tried to stay in there and do my job and fight for the team. Just go out there and attack every inning and go deep into the ballgame,” McPherson said. “I was establishing stuff early with the fastball, and the breaking ball was key for me tonight. Doing that, we were able to keep them off-balance and keep them in check.”

The rookie allowed just four hits over six frames with a walk and a career-high five strikeouts while throwing 94 pitches, 60 for strikes in his final outing on Saturday. McPherson finished his season in the Majors with a 2.73 ERA combined over his 26.2 innings (seven in relief) with seven strikeouts and 21 walks.

For what’s been a whirlwind season for McPherson, the right-hander proved at each level along the way this year that he has the talent to have success in the big leagues. After battling a right shoulder injury, which forced him to miss the first two months of the season and battle through rust in Double-A Altoona, McPherson needed just three starts at the Triple-A level before proving he was ready for the next step. McPherson allowed just two earned runs over those three starts (18.1 innings) while striking out 17 batters and limiting hitters to just a .172 clip.

“Quality pitches is always key for me,” McPherson said. “The ball tends to get up and get in the zone and that’s something I’ll continue to work on. But overall, after the injury and coming back, it was just focusing on the quality of each pitch.”

The season for the rookie was a challenge, but one that has ultimately made him a stronger pitcher.

“He pitched a very good ballgame,” Hurdle said. “Best outing for him in this trip. His fastball command improved. The curveball was in play. He used his changeup. He actually threw some nice two seam fastballs tonight and in some offensive counts…Very, very good job tonight. He’s got to feel good about himself after his performance.”

Marte Tightening Up Some Things

Starling Marte was out of the starting lineup against the Reds on Saturday after missing Friday as well. The rookie outfielder’s last start came on back-to-back games on Wednesday and Thursday when he went a combined 1-for-6 after missing four straight on the road.

“There’s a bunch of things that we’re working with, with Starling. Absolutely,” Hurdle said. “Base running, leads and breaks. Path, barrel to the ball, bunting — all three of those are probably at the top of the list. Just angles, paths, leads and breaks on the base.”

“He’s showed the defensive part of it. He can make it look easy. He made a throw at Citi Field the other day that took your breath away. He’s closed in on some balls that just make you go, [‘wow’]. When him and Andrew [McCutchen] are in left and center field, it’s like, ‘wow’. We cover a lot of ground on that side of the field…He’s still working to tighten some things up and improve things.”

On the season, Marte is hitting for a .250/.297/.408 line over 42 games in the Majors, and a .246 clip since coming off the disabled list with a right oblique injury. Marte has 10 stolen bases, five caught stealings over 152 at-bats. Six of those 10 have come in the month of September. The 23-year-old has the skill set that Hurdle believes makes it easier for him to improve in all those areas.

“A lot of it is confidence though,” Hurdle said. “A lot of it is the feel and the makeup that you see with different individuals up here that are even highly skilled. Base running, it’s a gambler’s mentality. It’s risk versus reward. And sometimes you get a player that puts more emphasis on the risk side than the reward side.”

“The skills obviously help because the kind of speed that he’s got is a game changing speed, but to make it productive and play out. We’ve seen some great jumps from him. We’ve seen some jumps that weren’t of the value that he can bring. Understating the difference in slide step and pickup. To make sure he’s watching some things and really focusing on something things. It’s all part of the experience factor that he’s got going on.”

McCutchen Walks Off to Snap Recent Skid; Not Watching Posey

Andrew McCutchen has had an impressive 2012 season, but sitting on an 0-for-15 skid, the outfielder showed up big for the Pirates with a swing of the bat. With one-out in the bottom of the ninth inning in a tied 1-1 game against Cincinnati, McCutchen launched a 2-2 pitch from reliever Jonathan Broxton for the Pirates third walk off home run this season.

“Beautiful,” Hurdle said. “He’s been playing. All year long, his at-bats he takes personal. He doesn’t give many away. There are some stretches that are challenging. To get in that count 2-2 to Broxton and just to pound that ball to right center field the way he did…he pounded that ball. Big swing. He’s got to feel good.”

McCutchen went 1-for-5 against the Reds. He trails Buster Posey of the San Francisco Giants .334 to .329 for the National League batting title. Although a tight race, McCutchen said he’s not watching Posey’s box score.

“We can look at that at the end of the season,” McCutchen said.

“It’s not that his confidence ever wavers,” Hurdle said. “But I do think there’s sparks that happens from his game from time to time. This could definitely be an igniter for him.”

— The Pirates drew 38,623 fans at PNC Park on Saturday night for their 17th sellout of the season. The attendance passed the two million mark for the first time since the 2001 season (when the ballpark opened) and just the fourth time in team history.