The Pirates have been busy in Australia over the past few years, having as many as five players from the country in their system at one time last year. Until recently though, there wasn’t a high-profile signing from Australia. That was until they signed 16-year-old shortstop Sam Kennelly this year to a $225,000 bonus. He comes from a strong baseball family — three of his brothers are already playing minor league ball. On top of all that, Kennelly is currently playing in the Australian Baseball League with the Perth Heat, having teammates as much as 15 years older than him, many of whom have major league experience. 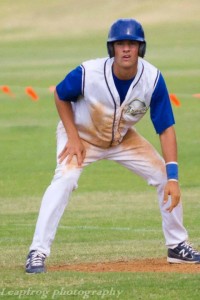 So far in the ABL season, Kennelly has started five games at third base, while coming off the bench another three times. He is 3-for-19 on the young season, with three singles, an RBI and one error.

Being just 16-years-old and playing in the ABL against older competition has been an incredible learning experience for the young shortstop.

“Playing against bigger, stronger players has set a high standard for me and I’m ready to face the challenge,” Kennelly said of his time in the league. “Being around the clubhouse with current and past professional players makes me aim to be as good as them.”

Part of the reason he can make the jump to this league at such a young age is because he is surrounded by his older brothers on a daily basis. All three of them know what it’s like to be in organized pro ball and they are his teammates with the Perth Heat. He gives them credit for helping him get to where he is.

“Learning from my older brothers and more experienced players has made me a better player,” Kennelly said. “The ABL has some former and current Big Leaguers and playing and being around them pushes me harder to have the experience they have had in the big show.”

For now, he knows what he has to do to get ready for next year, but he also looks forward to the next step.

“At the moment, with [Perth], I’m getting as much baseball in as I can, trying to get bigger and stronger so I really feel ready to play with the Pirates. Getting all my work in and learning everyday,” the infielder said.

He was signed as a shortstop, but has been playing third base as well. That’s not the only positions he’s been playing. He can play anywhere on the infield, but currently spends most of his time on the left side. He’s also pitched in the past. A few teams wanted him as a pitcher, but Kennelly didn’t want to give up the bat.

Kennelly is a hard worker and takes pride in being an all-out player and playing the game the right way.

“I take pride in all aspects in the game and believe both defense and offense are my strengths,” Kennelly said. “I like to try and make all my plays look and feel routine. I love throwing the ball as hard as I can to first base and making all the big league plays. I like hitting the ball as hard as I can every at-bat and making every at-bat count.”

He finished that thought up, with what you love to hear from someone his age. “I don’t like to leave a baseball game clean. I’m always there to play hard and finishing dirty and playing at 110 percent.”

That next step for Kennelly after the season, will be his first trip to the states, where he will participate in the upcoming portion of Minor League Spring Training.

“I haven’t been over to Bradenton yet, but have seen many photos and heard so many good things about it,” Kennelly said. “Knowing a handful of people that work for or with the Pirates, they have definitely put a good vibe towards the ball club and I really can’ t wait to get over there.”

Kennelly mentions that he has a “good vibe” towards the Pirates, and he credits that to the Pirates’ scout that signed him, Tony Harris. Kennelly was in Queensland, Australia at the Major League Baseball Australian Academy Program prior to being signed, with a few teams besides the Pirates looking at him. It was there that Harris convinced him to sign.

“The way he talked about the Pittsburgh Pirates and what opportunities there were, I knew I was gonna have a great time with the team,” the infielder said. “It was an exciting time for myself and the family. I know now I made the right decision and couldn’t be happier.”

Tony Harris may have signed Kennelly, but in two weeks Harris will get to face his newest signing, when Perth visits Adelaide. Harris is the Adelaide manager, so while Pirates fans won’t get to see him until Spring Training, Kennelly will likely get a chance to take on some of his future teammates. If things go as planned, he will get to face ABL All-Star Zac Fuesser in one start and possibly Rinku Singh in relief, as well as fellow Australians, Jackson Lodge and Wilson Lee.

You can sense the youthful enthusiasm with Kennelly, but he knows it will be a tough road to the majors.

“Right now I’m really excited to head over to Bradenton and pursue my dreams with the Pittsburgh Pirates,” he said.