The Pirates did not need much help to hit into outs over the first week of the season, they were doing a good job all by themselves. Cubs manager Dale Sveum decided to make life a little more difficult for one of the Bucs’ best hitters, Garrett Jones.

On Opening Day, Sveum shifted his infield to have three of his infielders on the right side. Jones hit into the shift in his first three at-bats, only reaching on a first-inning error by infielder Brent Lillibridge.

“I guess it’s just that time of year right now, I’m just a little out in front,” Jones said. “Teams pick up on that.”

That was a day the shift worked. It’s a bold strategy, Cotton, but does it really pay off for teams that use it? I set off to find some evidence either way by watching and charting all of Jones’ ground balls and line drives dating back to the start of last season. If you have an MLB.tv subscription and no life, like yours truly, you too can waste the hours away in a similar way.

Jones Hits Grounders and Liners Mostly to the Right

First, we find the reason teams shift on Jones in the first place. He is a true-blue left-handed pull hitter. Since the start of 2012, Garrett Jones has hit more than 78 percent of his line drives and ground balls to the right side, and fewer than 19 percent to the left side.

(These categories are largely eye-balled, with any of the three middle categories defined by the middle infielder having to move toward second base to make a play.)

To study how often teams shift positions on Jones, I divided the infield shifts I saw into five different categories:

When I started watching Jones’ ground balls and line drives, one thing frustrated me: no one was pulling a full shift on him! It wasn’t until June 2 that I first spotted a full shift, provided by the Milwaukee Brewers and shortstop Cody Ransom moving to the other side of second base.

Immediately, Jones proved true the old adage: “the best way to beat a shift is to hit past it.” Or “hit ’em where they ain’t.” Whichever you like. Anyway, he singled to center. 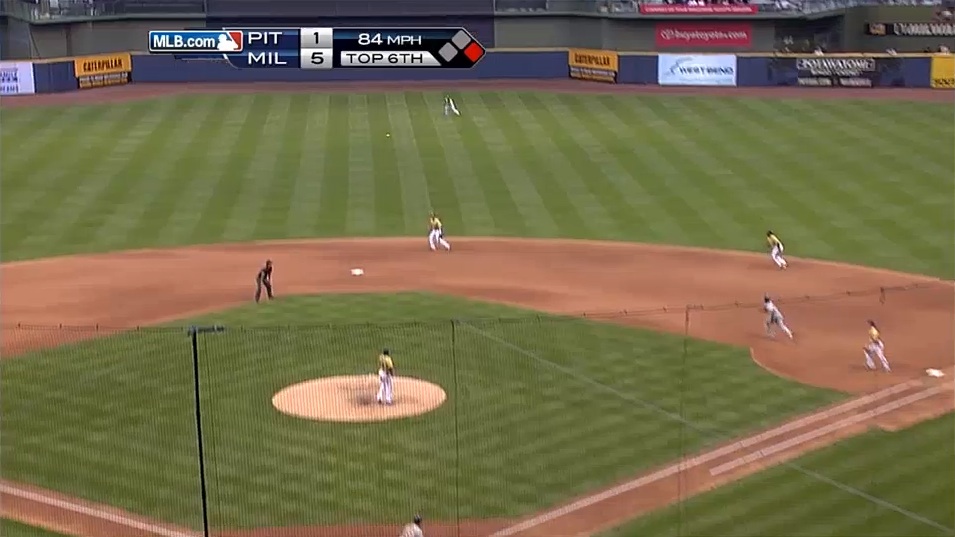 After that, the floodgates opened! Kind of! The Brewers shifted on Jones the rest of the weekend, then a few days later, interleague opponents Kansas City, Baltimore and Cleveland all shifted their infield when Jones came up to hit. Maybe those AL teams were compiling different scouting reports than the NL teams. Three examples and the results:

Since the start of 2012, the two teams that have shifted the most against Jones are the Chicago Cubs (under manager Dale Sveum) and the Houston Astros (under Brad Mills and Tony DeFrancesco). And when Jones hits into it…

“That’s very frustrating, especially when you hit it hard and it just one-hops right to him, and you know it would be a hit,” Jones said. “It’s tough. It can play games with you mentally.”

Here is an example of the shift the Cubs pulled on Jones on Opening Day, when he hit grounders to the right side three times.

Notice how teams like the Royals and Orioles position their second baseman further back into the grass, like defenses often aligned against David Ortiz. Jones does not have the same power as Ortiz, but AL teams are probably used to positioning that way against him.

Couldn’t Jones Just Bunt Away From the Shift?

You, dear reader, have almost as much experience bunting Major League pitches as Garrett Jones does (unless Jack Wilson is reading this, in which case “HI, JACK!”). Let’s take a journey back to the halcyon day of August 18, 2009. Old friend Lastings Milledge hit his first Pirates homer in a 5-2 win, but it was all surpassed in beauty by Jones laying down a bunt single.

It remains the only bunt Jones has put into play over 2,113 MLB plate appearances. Though Jones is not completely green when it comes to bunting. Manager Clint Hurdle says everyone worked on bunting in Spring Training. And Jones points out it “doesn’t even have to be a good bunt, as long as you get it over there” down the third base line to beat a shift.

“I see that third baseman over there and a bunt could be a possibility,” Jones said.

Jones is also somewhat slow on the basepaths, especially trying to get his 6-foot-4 frame out of the batter’s box. I clock him at about 4.3 seconds to first base, making him a 40 on the 20-80 scouting scale.

Combine that below-average speed with the fact that Jones is barely acquainted with the bunt, and the suggestion that he simply bunt away from the shift down the third-base line may not work out so well. A good hitter like Jones would have to bunt successfully 40% to 45% of the time, as Tom Tango figured out last year, for the bunt-away-from-the-shift ploy to pay dividends. We would have to see Jones lay down more than one in-game bunt to have any idea if he could get it done two out of every five times.

Does Pitch Location Affect Where Jones Hits It?

Pitch speed does not seem to affect Jones’ hit location as much, with the only significant number being that he hits fastballs up the middle more often than he does off-speed pitches.

There are many other players who see more infield shifts than Jones. Thanks to John Dewan for finding those guys so I don’t have to spend 100 more hours watching old at-bats.

Dewan found the hitters shifted against the most between 2010 and 2011. Let’s compare their ground ball/line drive numbers from those years (and how often they hit it to the right side) to Jones’ career marks.

With teams shifting on Ortiz and Howard, it stands to reason they should be shifting more on Jones, who hits more line drives and ground balls to the right side.

Here is the main reason more teams should shift on Garrett Jones. Look at his batting average on ground balls and line drives in play for each scenario.

It’s not as large a sample size as I would like, but the difference of 117 points on balls in play remains pretty stark. Combine those numbers with Jones hitting about four of every five line drives and ground balls to the right side, and we can say pretty comfortably that more teams should be shifting on Garrett Jones.

As for the shifts being used on him now, Jones says he does not really change his approach when he sees three infielders on the right side.

“I guess I get pull-happy throughout the season, and that’s when teams do it,” Jones said.  “It’s just a matter of trying to square the ball up… if you hit it hard somewhere, it’s going to find a hole.”

Even if the difference only ends up being 50 points on line drives/grounders in play, that would turn Jones from a hitter with a .320 on-base percentage over a full season to one with a .300 on-base percentage, especially if opposing teams pitch him inside.

Consistent shifts could turn Jones from an average hitter at getting on-base to well below average. All it takes is a couple steps to the left.