First Pitch: Bringing the Designated Hitter to the National League

Maury Brown of Biz of Baseball had an article today talking about why the DH is likely coming to the National League. Brown notes that the DH seems inevitable now that there are 15 teams in each league, and interleague play all year long. He also notes some of the roadblocks, such as the fact that adding a DH to the National League will drive up total salaries. Brown finished by saying that someone, somewhere is making the case for the DH in the National League.

Allow me to make that case.

First of all, I’m not a baseball purist. I embrace change, and don’t agree with doing things just because that’s how they’ve always been done, or that’s how they’re supposed to be done. That probably extends to more things in my life than just baseball, but in terms of baseball I think some of the purist arguments are silly.

The argument behind the designated hitter is that the National League has never had one, and pitchers have always been expected to pitch and hit. So in a baseball purist world we can’t have a specialized position like the DH because players are supposed to do everything? Well then explain why closers can’t pitch outside of the ninth inning. The NL has never used the DH, but there was also a time where they didn’t follow the ridiculously strict, and extremely specialized closer rules that every team follows today.

It seems that baseball is always resistant to change, and usually for no reason other than being stubborn. The DH would make the game much better, if only because you don’t have to watch a pitcher try to hit. And that’s argument number two: the magical strategy of making a team have to work around an automatic out in the lineup. Yeah, there’s strategy involved. There would also be strategy involved if your cleanup hitter had to hit from the opposite side of the plate. But that’s just a manufactured problem. There’s a much better solution. Obviously let the hitter bat from his normal side in that crazy scenario. The strategy to avoid the automatic out at the bottom of the lineup? How about put someone in the lineup who can hit. That seems like the best strategy to have.

It’s because of that strategy that National League teams have a disadvantage over American League teams. Consider the following examples:

**The Pirates, and every other NL team, have to dedicate a bench spot to a player who can play multiple positions. They need that because it makes it possible to do double switches. Usually these utility players aren’t strong on offense, and their real value comes from the fact that they can play multiple positions, even though they don’t play them well. Meanwhile, in the American League, you can have a guy who hits well, because that’s mostly what you’re going to be asking him to do.

**The Pirates lost Clint Robinson a week ago on waivers. Some said that it was no loss, since he profiled as a DH. If baseball was a fair sport, and it was possible to sign Pedro Alvarez for as long as the Pirates wanted him, they’d eventually have to let him go to the AL because he’ll eventually be a DH. American League teams were able to give Albert Pujols and Prince Fielder ridiculously long contracts at high prices, all because they could stash them in the DH spot when they started getting too old to play on the field. In a best case scenario, the Pirates would have Andrew McCutchen, Starling Marte, Gregory Polanco, Josh Bell, and Barrett Barnes playing the three outfield spots and the first base spot in a few years. Only there wouldn’t be a spot for one of those guys because the NL doesn’t have a DH. The AL has a huge advantage. They can sign hitters that teams in the NL could never consider because they don’t have the DH.

**The Pirates could never bring up a guy like Kyle McPherson to work out of the bullpen and serve as a spot starting option. He’d never get stretched out pitching in the National League. He’d go two innings in relief, then would be pulled for a pinch hitter. But in the American League, with a DH, he could go as long as he wanted. If a starter comes out in the third, McPherson could come in and pitch six innings to finish the game. And then five days later he could take the spot in the rotation of whoever didn’t make it past three innings in that start.

**Imagine if the Pirates were able to start Garrett Jones as the DH, without having to debate whether his defense is worse at first base or in right field.

These aren’t issues that the American League has to worry about. Guys like Jones have more value to AL teams, because they get all of the value from the bat, and don’t lose any value from the defense. AL teams don’t have to worry about double switches or pinch-hitting for relievers, which gives them more freedom with their bullpen and bench. There’s prospects in every NL system who have no value to NL teams, but who could be valuable to AL teams.

Let’s be honest. The American League and the National League aren’t two different sports leagues. They’re more of less two conferences in the same sports league. There’s no reason why they should operate under different rules, especially when they all have to compete in the same markets for players. It puts National League teams at a disadvantage. And before you suggest the other solution — getting rid of the DH — keep in mind that Brown pointed out this wouldn’t be an option, since the MLBPA wouldn’t agree to losing revenue and jobs. And it shouldn’t be an option, because no one needs to see pitchers hit. Especially when they only have to hit in one league, while the other league gets the benefit of an extra power hitter in the lineup.

**The 2013 Prospect Guide and the 2013 Annual are both available on the products page of the site. If you order them together, you’ll save $5. Get them both to use throughout the 2013 season.

**I was asked earlier on Twitter (@timwilliamsP2) about my avatar. If you haven’t seen it, here’s a picture: 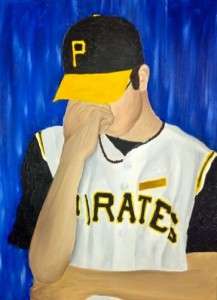 The pose is kind of a joke with my friends. I get headaches a lot, with pain between my eyes. So when one of my friends would do something annoying, or even when it wasn’t really annoying, I’d pinch my nose like they gave me a sudden headache. It’s much like Cartman on South Park, although I had been pinching the bridge of my nose well before South Park came out.

Like I said, it’s coincidence that I was wearing a Pirates jersey. I think I was pinching my nose because someone wanted to take my picture at the time. Or maybe they wanted a picture of me pinching my nose. Either way, that’s my pose of frustration, and it just so happens to have a Pirates theme. So I guess it fits the comments that I get — either that it represents frustration with the team, or or that it’s me taking a deep sigh in reaction to some of the crazy messages on Twitter. That’s not really the backstory to the photo, but it’s kind of why I uploaded it one day, and it’s definitely fitting.

**This is really impressive. From July 15th, 2005 to this afternoon, the Tampa Bay Rays had not used a starting pitcher who was signed as a major league free agent. The list of pitchers they’ve used during that time has some really good names, and some forgettable names.

**Is West Virginia Primed For Another Year of Breakout Players?

**Pirates Pregame: McCutchen Making Moves on the Base Paths.