This is your chance. Neal Huntington heard it from multiple teams leading up to the 2013 Trade Deadline. More than one competing front office told the Pirates general manager to “act properly,” as this was his chance to end 20 years of losing.

“Reminding us how important it was to the city for us to win and how long it had been,” Huntington said. “We understand it. You know it’s part of the gamesmanship. It had no impact whatsoever, if not turning us against them a little bit.”

Huntington did act properly. No other NL Central rival budged and overpaid to improve their current roster, so neither did he. It sets up for a very competitive next three pennant races. The Pirates, St. Louis Cardinals and Cincinnati Reds are all built to jockey for the 2013, 2014 and 2015 pennants until the rebuilding Chicago Cubs have a strong MLB roster to match their big-market revenue streams.

The 2015 edition of the Bucs is potentially the most interesting roster in years, especially for you types that like to follow Pirates prospects (hey, you). This year’s team, projected to win 94 games, is largely built around impact free agents and Major League trade returns.

But in 2015, the following players will be lost to free agency if they do not sign an extension. Maybe Martin (who will be 32) or Liriano (31) re-signs, but let’s err on the cautious side and say they will not:

And this list of players will both be potential non-tenders in their second or third arbitration year:

That’s five of the nine starters from 2013 Opening Day, four other starting pitchers from this season and an All-Star closer — gone.

Happy trails. Many of these guys will play important roles in the Pirates’ current postseason quest, but time can be cruel to baseball players entering their 30’s. Two years from now, Huntington will have a youth movement as his disposal to keep the win times rolling. Since no one left at the trade deadline, the GM says his front office is making “tentative plans” for future rosters though not “concrete plans.” 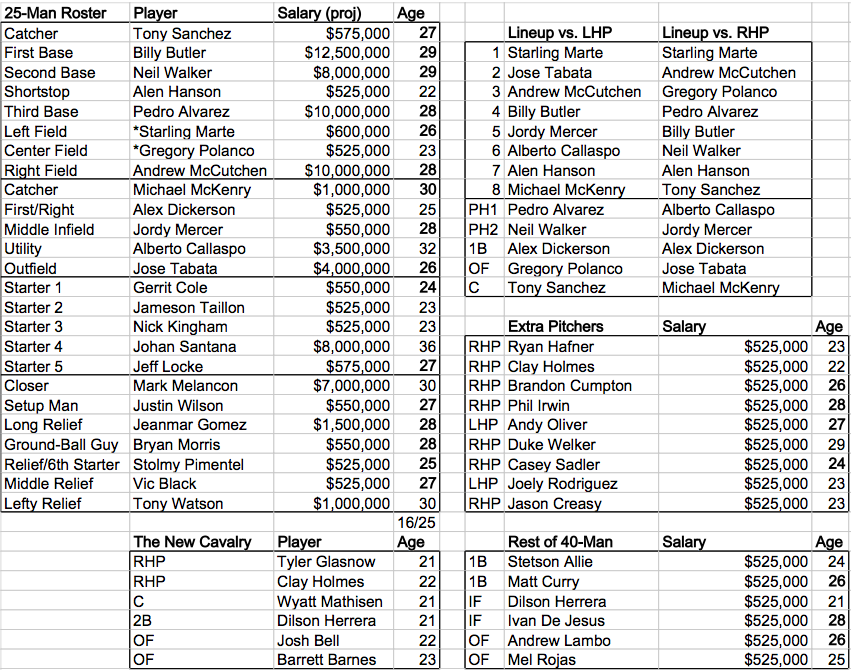 Before we get down to the minute details (which I really enjoy), here are five important points to note:

Let’s get into this:

Who the Pirates Lose

This all started by looking at the Future Payroll Projection Chart and figuring out who would still be around in 2015. At first glance, Huntington has a blank slate to work from. Only $14 million is committed to the 2015 payroll right now: $10 million to Andrew McCutchen and $4 million to Jose Tabata.

Then add in the guys already on the active roster who would still be playing for the minimum in 2015: Gerrit Cole, Jeff Locke, Starling Marte, Jordy Mercer, Bryan Morris, Tony Sanchez and Justin Wilson. Each one seems like he will be around two more years, so that takes the Pirates to a minimum $17.675 million for nine players. For our purposes, I bumped up their salaries on the chart, which teams often do for players who have Major League experience.

While you could technically field an MLB team with just nine guys, it’s not recommended. Let’s keep going and add in 20 players who are all in the minor leagues. You can probably recognize most of the names on the chart. They bump up the payroll projection to about $20 million, and it leaves us with only 11 spots to fill. Being a GM isn’t all that hard!

Who Stays Through Arbitration

Now it gets more difficult. Many players on the current 40-man roster will be arbitration-eligible in 2015. We will roll through their names quickly in alphabetical order and make the call:

The unsigned players would be non-tendered. All of the salary figures are estimates based on performance and year of arbitration, plus a scientific process called “I guessed.” The six arbitration-eligible signings add $28.4 million to the payroll.

Who Comes In From Outside

When I looked at three roster spots needed to fill, I concurrently noticed three potential weaknesses of the roster:

First baseman Billy Butler would be entering his final season of Kansas City Royals’ control in 2015, a $12.5-million team option with a $1-million buyout. For that price as a 29-year-old pending free agent, Butler has to be a trade candidate this winter and next. Royals GM Dayton Moore pushed his eggs into the 2013 basket by trading Wil Myers+ for James Shields, and whether it works out with a playoff spot or not, he should be looking to re-stock prospects.

Butler is a career designated hitter who plays a mediocre-but-capable first base (356 career games). He also hits righties well and creams lefties, crafting a career 120 wRC+ that gives him a thumbs-up to hit in the middle of the lineup. “Country Breakfast” is an easy .300/.360/.460 hitter in Pittsburgh, and his trade cost depends almost entirely on much of his $12.5 million the Royals are willing to take on to get prospects back.

West coast enthusiast Alberto Callaspo hits left-handed pitching very well, posting a career 106 wRC+ against lefties despite the fact that he is about as tall as your child. He plays mostly a strong third base and mediocre second base, though he has dabbled enough at shortstop and outfield to be considered a utility belt. Callaspo is a free agent after next year, so signing him to a two-year, $8 million contract to platoon with Alvarez and bounce around the field (figuratively) would be a good choice.

One more free agent, and even I am not 100 percent about it: Johan Santana. Here’s the good: he is a two-time Cy Young winner who could be available for 40 cents on the dollar and says his career is not over, his strikeout-flyball style as a left-hander is perfectly suited to playing at PNC Park in front of a Marte-Polanco-McCutchen outfield and he would be a veteran presence.

Now the bad. Shoulder injuries are bad, so bad that almost any guaranteed money seems too risky. He has not pitched for 12 months and may not pitch too often next year. But you know what? If Huntington can cut a deal similar to that of Liriano’s, a small guarantee that balloons if Santana is even moderately healthy, the lefty is a huge late-career revival candidate in the vein of A.J. Burnett. Go out and see what two years and $18 million would get you.

Even if the Royals took on no money for Butler, the Pirates would be fielding what looks to be a winning Major League team for a mere $82 million.

Here’s the beauty part: they can go higher than that. Pittsburgh is projected to spend about $70.5 million on its MLB payroll this year, one of the lowest in the game. The team could earn a few million from a deep playoff run, but even making the postseason will cause 2014 ticket revenue to spike. The Pirates can finally substantially raise ticket prices (sorry fans, but they are the third-cheapest in baseball and will likely stay low) and Pittsburghers will line up to pay those prices for season tickets. The Penguins now have a long waiting list a decade after a season in which they averaged 11,877 fans per game.

So it’s easy to see next year’s payroll going to $80 million even if they don’t “make a splash” for Robinson Cano or Matt Garza. Keep in mind: the national TV revenues for every team will double starting next season under the new television contract. The price for top free agents may even skyrocket. Clayton Kershaw will be very happy.

I think the team I have assembled can win 100 games, though they would need as much luck as any 100-win team not named the Yankees or Red Sox. The Pirates’ run production stands to increase the next two seasons as the current lineup hitters (plus Butler) reach their prime and Gregory Polanco enters his sophomore season. The run prevention could remain one of the best in the game, provided by strong defensive play, aggressive shifting and the influx of young talent on the mound.

Even if you are less optimistic and see the roster as an 88- or 90-win team, the payroll space and opportunity would be there to ship some of “The New Cavalry” of prospects (who could start pouring in for the 2016 campaign) for the instant impact of Giancarlo Stanton, Johnny Cueto or Jeff Samardzija.

This is their chance.