The Pittsburgh Pirates beat the St. Louis Cardinals tonight 5-3 in a game that featured a lot of resolve from the Pirates. They had to overcome a lot of obstacles, from Francisco Liriano’s struggles with command, to the Cardinals coming back twice, to a few tough breaks and base running mistakes. In the end they won and took a 2-1 series lead in the best of five NLDS. Here are five instances when the Pirates overcame a tough situation to eventually go on and win.

The stat line won’t show it, but Francisco Liriano wasn’t sharp tonight. He ended up with two runs on three hits and two walks in six innings, striking out five. Those are good numbers, although they hide the lack of command that Liriano showed on the night. Even with the lack of command, he managed two runs and less than a base runner per inning.

The problem was that Liriano needed 101 pitches to get through the sixth. Only 58 of those were strikes. He also had a lot of hard hit balls which went right to his fielders in the outfield. Had some of those gone to the gaps, or gone over the head of a fielder, then this could be a different recap.

“We had a couple of real good opportunities,” Cardinals manager Mike Matheny said. “You look at the situation, guys in scoring position, and Holliday up hitting the ball hard to right field.  When it came off the bat, I thought it would have a little more carry than it did.”

Matheny was talking about the play to end the fifth inning. After giving up a two RBI single to Carlos Beltran, Liriano got a hard liner to right field against Matt Holliday. Marlon Byrd hustled back and made the catch, although if he didn’t have as good of a break, or didn’t hustle for it, the ball might have fallen in and scored a run.

“He didn’t have his best stuff tonight,” Clint Hurdle said. “In the numbers situation, he had to go in there and make sure that he made pitches where we have to make plays.  There were a few walks involved.  I think just two walks, one hit batter.  Many three-ball counts.  I think eight on the night.  So that was challenging in and of itself.”

Liriano had some good luck with balls hit directly to fielders. He also had some bad luck due to bad calls. The two run single by Beltran in the fifth came one play after a double steal. However, replay shows that Jon Jay was out at third base, as shown here in GIF format via @BuzzFeedSports. 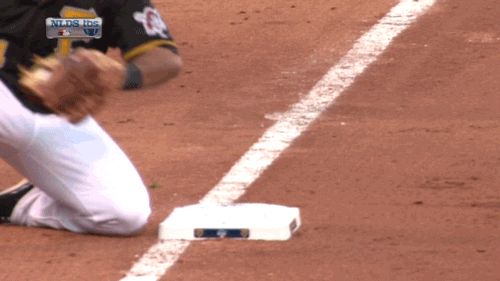 There were also some bad calls from the home plate umpire, with a lot of strikes called balls, and a lot of balls called strikes. That didn’t totally lead to Liriano’s low strike percentage, but it didn’t help.

One of the characteristics of an ace might be overcoming the lack of stuff to keep putting up strong results. Liriano didn’t have his best stuff tonight, but he still put up a great performance. He wasn’t responsible for the luck factor where the hard hit balls went to his teammates. But he was responsible in part for limiting the damage tonight, despite the command problems.

2. A Chance to Pull Away

Joe Kelly benefitted from a hard hit ball right to a fielder tonight. In the third inning, with the Pirates up 2-0, Kelly gave up a one out single to Andrew McCutchen. That brought up Justin Morneau, who lined one down the first base line. However, that went directly to Matt Adams, who was able to then step on first base and double off McCutchen.

The key here was that the Pirates had Joe Kelly on the ropes after two innings. He threw 29 pitches in the first inning and 13 pitches in the second inning. But he only threw five pitches in the third, thanks to a first pitch ground out by Neil Walker, and the double play to Morneau, which came on the first pitch. That allowed him to settle down, and put Kelly in a situation where he had one less pitch than Liriano after four innings, despite the 29 pitch first.

It didn’t take long for the Pirates to bounce back after the Cardinals tied it up 2-2 in the fifth inning. Russell Martin came up in the sixth inning with the bases loaded after an intentional walk to Pedro Alvarez. He responded with a sacrifice fly to center, scoring Andrew McCutchen from third base to take a 3-2 lead.

“The quality of our at-bats has shown up the last two nights throughout the lineup,” Clint Hurdle said. “We’ve given ourselves opportunities and chances, whether it be by a walk or a situation where you extend an inning.  We’ve had some two-out RBI’s.  We’re just playing a much better and solid offensive game the last two nights.  It’s pretty simple.”

The Pirates lost the lead again in the 8th inning. With Mark Melancon on the mound, Carlos Beltran hit a solo homer to make the score 3-3. Beltran also had the two RBI single in the fifth. That sent the game to the bottom of the 8th, where the following two events happened.

4. A TOOTBLAN by McCutchen

Andrew McCutchen came up to lead off the top of the eighth inning, and he did what any MVP would do: he hit a double. That was followed by something that an MVP wouldn’t do: a TOOTBLAN.

McCutchen broke for third on a grounder to shortstop Pete Kozma. Kozma threw to third, and got McCutchen out by a mile, which is to be expected when a runner breaks for third on a ball hit to the left side of the infield. That put Justin Morneau on first base with one out, instead of McCutchen on second with one out. But the Pirates made up for it on a key at-bat by Marlon Byrd. The right fielder drew a walk on an eight pitch, full count at-bat to put runners at first and second with one out. That’s the exact same situation they would have been in had McCutchen stayed. The Pirates swapped in Josh Harrison for Morneau, so they still had speed on the bases.

5. Pedro Clutch vs a Left-Hander

After the Pirates put runners on first and second with one out, the Cardinals responded by bringing in left-handed pitcher Kevin Siegrist. Here were the numbers of each player on the season:

“Kevin Siegrist has done such a great job for us, especially as a young guy,” Matheny said. “Hasn’t been in this league before.  You put him in a big situation and all season long he’s done a terrific job for us.  That’s the match-up we wanted.  And today they won.”

Alvarez has been huge for the Pirates so far in this series. He went 1-for-3 tonight with an intentional walk, and is hitting .400 with two homers in the three games so far.

The Pirates later added another run when Russell Martin singled to left field, putting the Pirates up 5-3, and allowing Jason Grilli to close down the game in the ninth.

“When the score is tied, you have to score,” Hurdle said. “You’re not always able to do that every night.  But you have to find a way to get on, make something happen.  We’ve been road blocked ourselves late in the eighth.  We were able to push through that and create an opportunity and still plate two more runs.  It’s not like we’re trying harder than the other team.  Sometimes it does come down to execution, it comes down to pitchers.  You’re getting a handle at the plate and what you’re able to do with them.”