The 2013 Pittsburgh Pirates season was the perfect situation for any young pitcher trying to break into the big leagues. The Pirates saw a lot of injuries, especially during the first three months of the season, leaving a lot of rotation spots up for grabs. Phil Irwin was one of those young pitchers who got an early shot at the majors, making his debut on April 14th. The debut didn’t go well, with Irwin giving up four runs in 4.2 innings of work. What happened after that was even worse.

Irwin missed a few weeks after that start, made one more appearance in Triple-A at the end of April, then missed the remainder of the season after undergoing ulnar nerve relocation.

“It was probably the most bittersweet moment of my life,” Irwin said. “You finally get up there, and get a chance, and then it ended up being one of my last starts of the year.”

“Usually guys have it when they have Tommy John surgery, and when I had mine, it’s at the doctors discretion and for whatever reason he just didn’t think that I needed it,” Irwin said. “Here we are seven years down the line, kind of a freak think, and it flares back up.”

Irwin’s nerve was fine until the 2013 season. The nerve got caught up in some scar tissue, and he didn’t have the full mobility that he should, with some tingling in his hand. Dr. James Andrews popped it out of the groove it was in to make it more mobile. Irwin missed the rest of the season, but was able to return during the Arizona Fall League over the off-season.

“I felt like I tested it pretty good out in the fall league, and I’ll just see how it reacts to higher competition,” Irwin said about his arm, noting that he was feeling good. “Always going to have aches and pains. Just hopefully it’s not that particular one that flares back up again.”

The results for Irwin in the AFL weren’t strong, although the focus was more on seeing if he was healthy and could adjust back to pitching after the procedure.

“My numbers weren’t that great, I didn’t pitch that well, but it was more for reassurance that my arm was good to go for Spring Training,” Irwin said. “I could work on some stuff and not worry about the result. I really made it a priority to work on my changeup and throw it. My last start I think I made it to the fourth inning without throwing my curveball, which was just a miracle for me. I got some good work in out there, and got me mentally ready for this.”

Irwin will enter the 2014 season fighting for a spot in the majors, but most likely he will end up back in Indianapolis, pitching out of the rotation and once again serving as early season rotation depth. He’s got the stuff to be a back of the rotation starter, with a four-seam fastball that has worked in the low 90s, a two-seam fastball that he uses as a situational pitch, a changeup, and a curveball, which is his bread and butter. The curveball is a plus offering, and drew a lot of praise from Carson Cistulli of FanGraphs for GIFs like this. 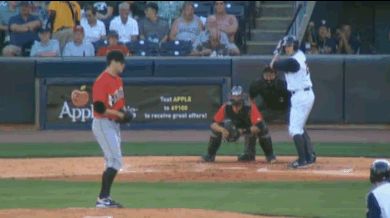 “It’s a pitch that, fortunately enough I could probably not throw it for a year, and it’s always going to be there,” Irwin said with a laugh, in response to how the curve was doing after his procedure.

Irwin said that his dad taught him the curve when he was 11 or 12 years old, and it clicked the first day.

“I don’t know what allows me to throw it that way,” Irwin said. “I’ve tried to help other guys with theirs, and they can’t seem to get the grasp of it. It always came easy to me. It’s hard for me to get into someone else’s shoes that has trouble throwing a breaking ball.”

Now Irwin is back to being healthy, and will look for another shot at the majors. He’s going to need another injury, or struggles in the big league rotation for a shot at making the majors. He also will have to compete for depth time with Jeff Locke and Brandon Cumpton, along with Jameson Taillon by mid-season. Even though Irwin looks like he could be a starter in the majors, the Pirates have a lot of pitching depth, which could make his long-term role with the team out of the bullpen or working as a depth rotation option out of Triple-A.

“I’m always looking for that opportunity to break into whatever role they need me to play,” Irwin said. “It’s a long season, and it never ends the way it starts. With injuries, and trades, and everything, you just never know when your name is going to get called.”