There is no question that Stetson Allie has the best raw power in the Pittsburgh Pirates farm system. As far as the entire organization, the only player who would be better is Pedro Alvarez. The ball explodes off Allie’s bat with little effort, making you believe that if he reaches the majors, 30 home runs could easily be accomplished.

One thing that stood out in Bradenton was a high leg kick that I hadn’t seen before. Allie was crouching and raising his front leg, kind of in a Jeff Bagwell approach, which can be seen in the photo below. 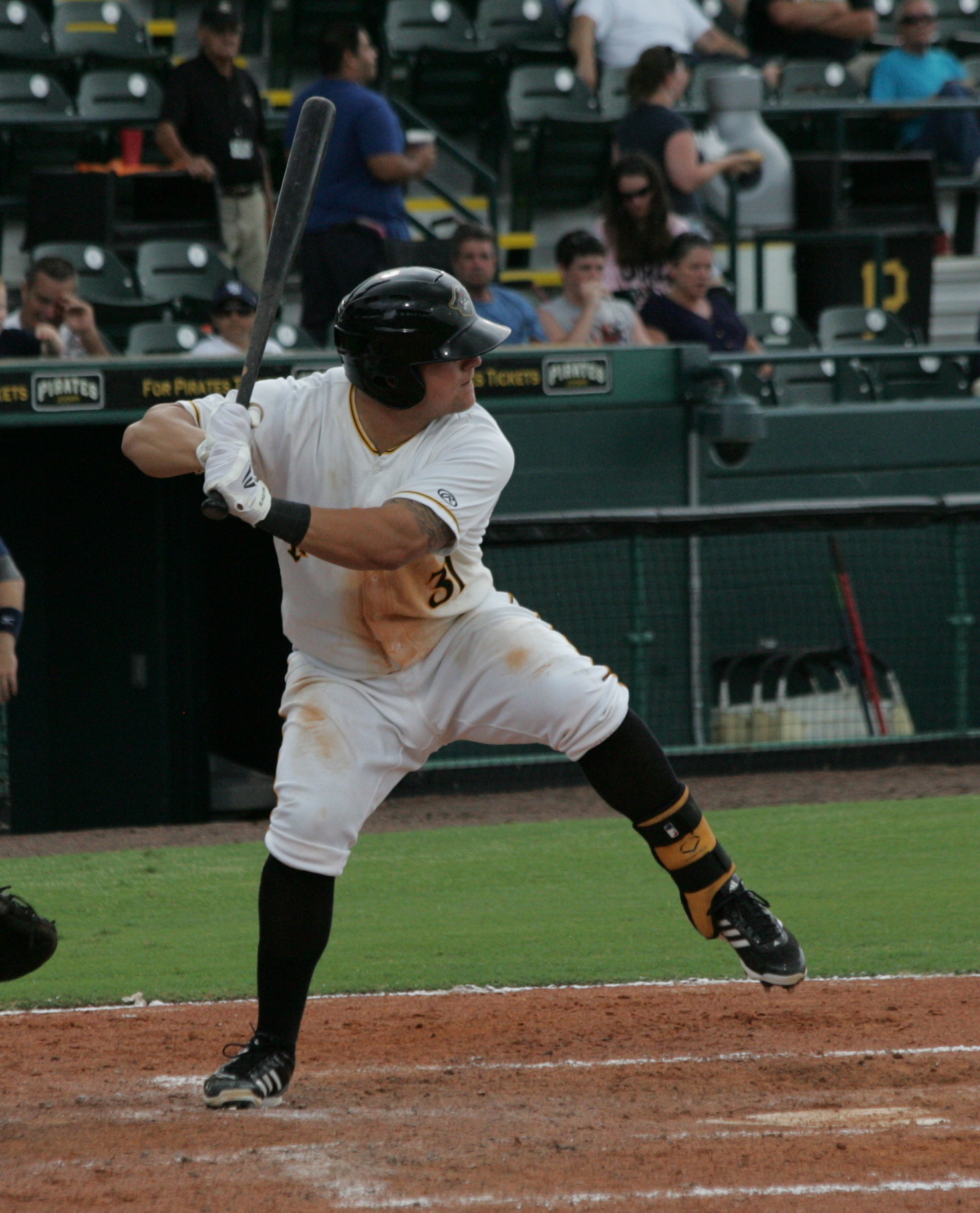 “I think that’s one of the reasons why I struggled a bit in Bradenton,” Allie said about the leg kick. “I was going through little things, trying to do too much. In West Virginia I didn’t do that, and at times in Bradenton I didn’t. But I got back to what I was doing in West Virginia, during the off-season, and I’ll just continue to do it here.”

He noticed the kick after seeing pictures and watching videos. He talked with Orlando Merced and other coaches who knew his swing, and got back to the swing that brought him success in West Virginia. So far in camp I haven’t seen him with the crouch or the leg kick.

But even in West Virginia he had the strikeouts. And that’s not an issue that goes away easily. But for Allie, there’s a bit of an asterisk. He’s not like most hitters where he has a long track record of strikeouts. The 2013 season was Allie’s first full year as a pro hitter. He hadn’t been a hitter since his junior year in high school. So you could give him a year to get readjusted to hitting, and to get used to facing professional pitching.

“It was tough,” Allie said on his return to hitting. “The velocity is totally different. I went to high school in Ohio, so maybe once or twice a year you’d face a guy who threw upper 80s.”

I see rookies coming out of high school who are shocked at so many people throwing 88-92 MPH in the GCL. Allie is basically a really old high school hitter. His 2013 season was the equivalent of what the 2014 season will be for Austin Meadows or Reese McGuire, and both of those guys are expected to spend the entire season in West Virginia. Due to his age, Allie was pushed to Bradenton by mid-season.

The Pirates will be giving him another aggressive push this year, sending Allie to Altoona to start the year. Allie told me that he’s been focusing on what upper level pitchers have been throwing in his live BPs. He doesn’t swing during the BPs, instead watching the movement of the pitch and the spin of the breaking stuff.

“The earlier you see it, the better you’re going to be,” Allie said on the quality of the pitches at the level.

The Pirates get criticized for promoting their prospects slowly, but they tend to make aggressive promotions and this is one of them. Allie struggled in Bradenton, and looking at the numbers, there would be no reason to promote him to Altoona without seeing if he can figure out things in Bradenton. Sometimes these promotions are made in a “move up or move out” fashion, where sticking around at a level and seeing how you do the second time around isn’t an option. Other times it’s because the Pirates have seen something in the player that doesn’t become obvious until the season begins. When it comes to Allie, he’s looked great early in camp, and the approach looks much better than it did in Bradenton last year.

Allie has also lost 15 pounds, which was a goal of his over the off-season. He said the weight loss has helped him not only with his hitting, but with his running and quickness playing first base. He originally started at third base, but quickly moved over to first base in the GCL last year. There has been no talk of moving him back to third base.

As for first base, the path is open to the majors, as there are no first base prospects in the minors who really stand out. Allie has the best power of all of them, but has the strikeout issues to deal with. As for his defense at the position, the weight loss could help him in that regard.

“Defensively I’ve felt phenomenal this year,” Allie said of his work so far. “Learned a lot. Leaned up a little bit. Got a little more quicker, faster, flexible. Obviously I felt great out there.”

Allie is a right-handed hitter, which doesn’t always play well in PNC Park due to the spacious left-field that can rob a hitter of power. But Allie’s approach is to hit to the middle and opposite field, which does play well for PNC Park. If you’ve seen some of the hitting videos I’ve posted, you might have noticed the Pirates have lined up two or three balls across the plate in front of the hitters. Those are positioned for point of contact, with the hitters being challenged to see the ball deeper in the zone. That’s Allie’s approach in the game, and the focus in batting practice has helped him focus on avoiding getting pull happy.

“I think this year and last year, what I’ve tried to focus on is not trying to hit the ball all over the place,” Allie said. “I just stay opposite field, middle of the field, and that’s when the home runs will come.”

Allie has lost weight. He removed a major glitch in his swing that developed in High-A. He’s focused on hitting to where he has the most power — in right and center field. He has a year of experience against pro pitching. The Pirates think enough of him to give him a push to Altoona. But none of this answers the big concern about his effectiveness against breaking stuff, which was a big contributor to his strikeout issues. The breaking stuff will only get harder as he moves up. Allie discussed his issues with breaking pitches last year.

“For me it was learning,” Allie said. “Knowing situations. I’m a four hole hitter. A guy on second, less than two outs, I know I’m going to get [a breaking pitch]. And for me, I was very anxious. I didn’t know any better. This year is a lot different. I’ve got a lot more knowledge from my failure. Not being overly aggressive. Knowing the situation that’s on the field. And that’s something that, unless I went through it, I would have never known.”

Whether Allie uses that knowledge to cut down on his strikeouts remains to be seen. But he doesn’t necessarily have to cut down on the strikeouts to have success. He dominated in West Virginia with almost the same strikeout rate that he had in Bradenton. And it’s not like you have to look far to find a guy with massive power, minor league strikeout problems, and success in the majors. Pedro Alvarez fits that description exactly.

Alvarez had a 24.6% strikeout rate in High-A, and was 22.9% in Altoona and 24.5% in Indianapolis during his first run through the level. That’s slightly lower than Allie, but still pretty high. Alvarez has strikeout issues in the majors, but that hasn’t stopped him from crushing 30 homers per year over the last two years.

Allie has the same explosive power that Alvarez has. He also has the same strikeout issues. That combo doesn’t guarantee that he will be the first base version of Pedro Alvarez. Plenty of players have had power and strikeout problems, and haven’t made it past Double-A. It’s impossible to predict which ones make it, and which guys flame out in Double-A. The unscientific approach here is that Allie is just going to have to show that he can live with the strikeouts and have success, while maintaining his power. He’ll get the chance to do that at the Double-A level in 2014.