His work this year is still a “small sample size”, and there’s some reason to expect better performance going forward.  So far, 13.0% of  fly balls off of Grilli have left the park, which is above the league average and Grilli’s career rate.  Conversely, the 37-year-old’s BABIP is due to regress in the other direction, as it currently sits at .267.  Additionally, his batted ball profile looks like it is trending the wrong way, as he has a career low 27.1% ground ball rate, and a career high 47.9 fly ball rate.  He has never had great looking batted ball stats, but it didn’t matter nearly as much when he was striking out over 36% percent of hitters (as he did in 2012 and 2013).

The real problem for Grilli is his declining strikeouts and increasing walks.  Finding out the root cause of these problems is not as clear-cut, as his plate discipline stats don’t really hold any answers.  The right-hander isn’t getting quite as many swings and misses as the previous two seasons, but he is getting more first-pitch strikes. Overall, Grill looks to be a mixed bag this season. He is doing some thing slightly better, but other, more important things, slightly worse.

If you break it down by pitch type, Grilli has been much less effective with both his fastball and slider, pitches he throws over 90% of the time.  Using Fangraphs Pitch Values (which determine how man runs a pitch was below or above average per 100 pitches) both Grill’s fastball and slider are not only less valuable than last season, but are both below average.  His fastball went from being worth .86 runs per 100 pitches in 2013 to -.35 this season. His slider went from 1.55 to -.91 by the same metric.

Since he’s not doing anything different in terms of pitch selection or location, I decided to look at his fastball velocities. He hast lost about half a tick off his four-seamer from last year, dropping from 93.3 mph to 92.7 mph.  That’s not huge, but velocity loss can have different affects on different pitchers.  I took a look at some graphs of his velocity over the last two seasons. Here are Grilli’s fastball velocities from 2013, moving (counter-intuitively) chronologically right to left. 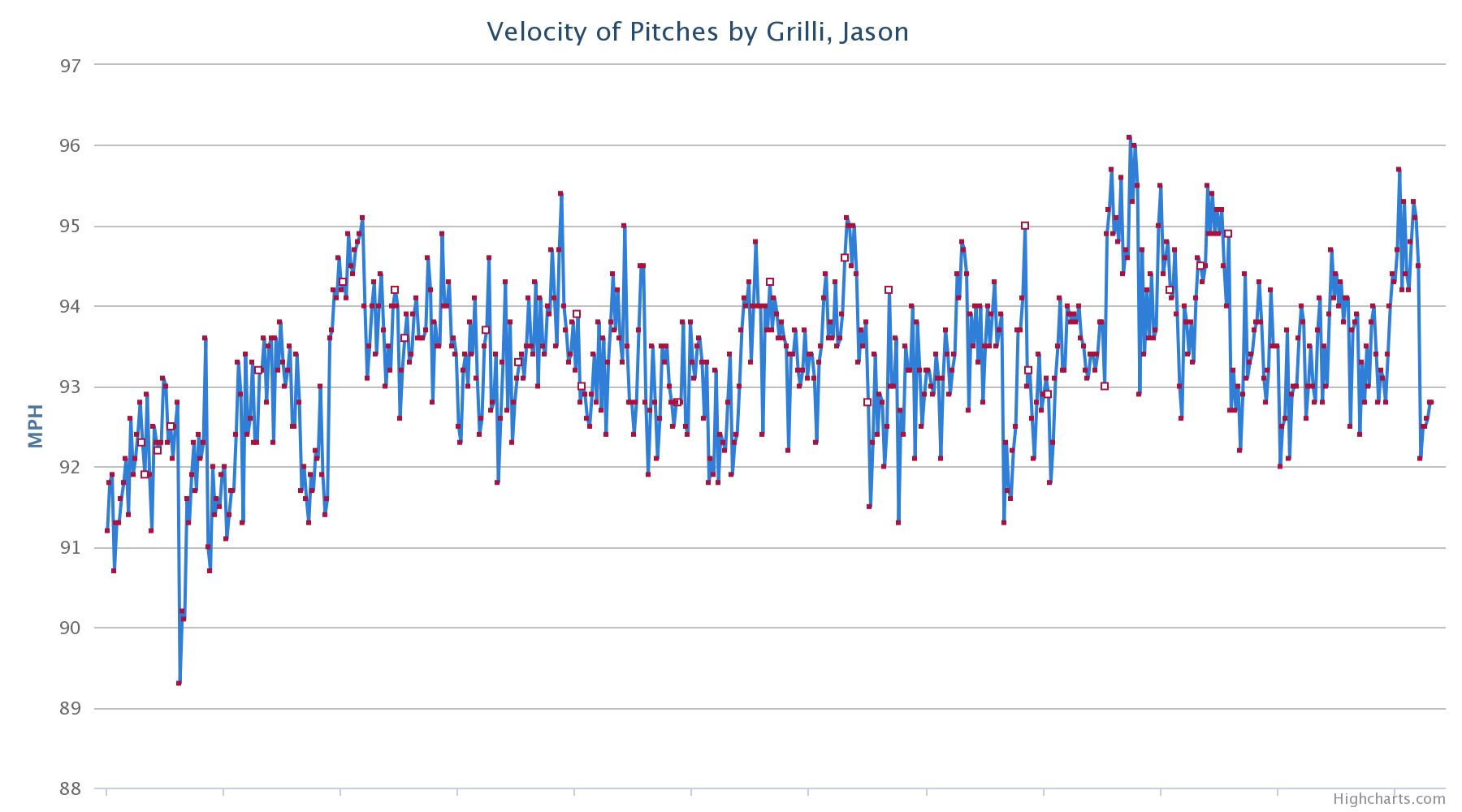 So you can see that he dropped off sharply after his late-season DL trip. In fact, he registered 25 pitches over 95 mph before the injury, and ZERO afterwards.  His average velocity before the injury was 93.6 mph, afterwards it dropped to 92.2 mph. So there is an even larger velocity decline if you are comparing this year to pre-injury 2013, when Grilli was at his best. After coming off the DL in September last season, Grilli struck out eight and walked three while allowing four runs in 7.2 innings, definitely a step below his dominant form.

So maybe he does need a faster fastball to get good results. His velocity chars in 2013 provide a little more evidence of this.  Again his most recent outings are on the left, with earlier results on the right. 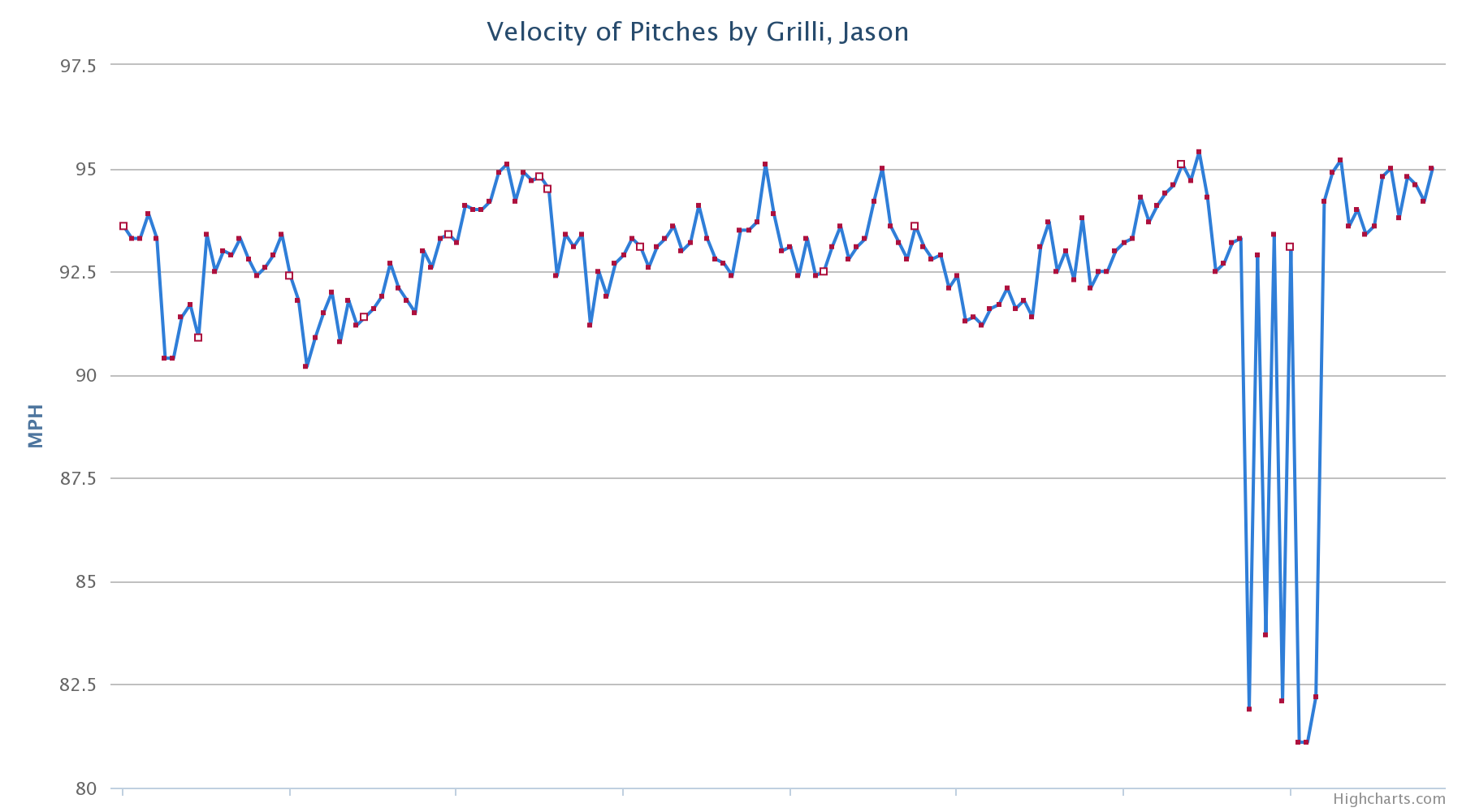 Ignoring the mis-classified pitches in his second outing, Grilli was close to 2013 velocities up until the beginning of June. He hasn’t hit 95 mph since June 1, and needless to say, the results haven’t been good this month.

Maybe this is just a blip on the radar and his velocity will stabilize going forward.  Like I wrote before, the problems for Grilli are clearly the poor strikeout and walk numbers.  But it’s tough to point to a reason for those bad numbers.  He really isn’t doing much differently, with his velocity being a possible culprit.  It could be that he has declined slightly in a number of areas, with the result being he’s much less effective overall.

But I wouldn’t expect him to continue to pitch this poorly all season.  While he’s been below replacement level thus far in 2014, both Steamer and Zips think he’ll be better going forward. Over the rest of the season, they project him to have a 3.18 and 3.17 FIP respectively. I think his results will be closer to those projections than his current numbers.  But with relief pitching being so unpredictable, and Grilli dealing with injuries and aging, a sudden decline is a very real possibility.

Stats courtesy of Fangraphs, and current through 6/18/14.