Prospect Highlights: First Look at a GCL Pirates Pitcher With a Tale of Perseverance

Yesterday, we shared some great video of 19-year-old five-tool outfielder Tito Polo from Tuesday’s GCL Pirates game. Check it out if you haven’t seen it, the link includes four of his plate appearances from the game.  You don’t often see video from down in the GCL, but we are lucky enough to get our own video once in awhile, as well as some help from the GCL Pirates fan page. So you’re getting a chance to see some of these of these players much earlier than usual. Today, we take a look at a pitcher from the GCL Pirates for the first time, one that has a very interesting story. 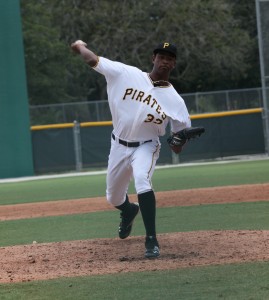 Today’s featured player is Yunior Montero, who is an incredible case of perseverance in a young pitcher. He was signed by the Pirates in 2009 for $45,000 and then MLB stepped in and said they couldn’t verify his age/identity, so his contract was voided. Well, Montero got a lot better while he was waiting for the verification process and the Pirates had to fork over $185,000 to sign him a second time because other teams saw his progress. Montero pitched for the DSL Pirates in 2011, starting the second game of the season. In his pro debut, he threw five shutout innings, allowing two hits, a walk and he struck out four batters. It sure looked like the Pirates had a stud pitcher. He was still just 17 years old, a 6’4″ right-hander that threw 94 MPH and he dominated in his pro debut after being forced to sit out a year.

That one start for Montero turned out to be his only game for a long time. The higher ups at MLB again stepped in and voided his contract, again it was due to identity issues. This time, it caused him to miss the rest of the 2011 season, all of 2012 and he didn’t sign again until the 2013 July 2nd signing period started. The third time seems to be a charm, but it really makes you wonder what went on with Montero. His name has never changed and his age hasn’t either, he is 20 years old right now, turns 21 in August and he was signed in August of 2009, meaning that he turned 16 then, which is the age in which international players can first sign. These last three years, he has just been pitching on the side, still showing the potential he had back in 2010, when he signed a six-figure deal, but he didn’t get anywhere near that amount the third time he signed.

Montero’s struggles didn’t exactly end when he signed his third contract in early July last year. If all went well with it, he would have pitched in the DSL last season. He was working out daily at the Pirates Academy and I was told by other that he was anxiously waiting to get back on the mound, basically a young man on a mission. While he was signed again, the contract wasn’t approved right away and he watched the 2013 season slip by. Montero finally got his contract approved and the Pirates realized that he had the potential to move up, despite the lack of in-game experience.

So now after 4 1/2 years of delays and MLB red tape, Yunior Montero is finally doing what he loves, what his arm was made for, pitching in games that count. He is in the bullpen for the GCL Pirates. He has thrown 11 innings over seven appearances, posting a 2.45 ERA, with two walks, seven strikeouts and a .279 BAA. Not bad for someone that has spent the last three years waiting to finally get his opportunity to play baseball.

Below is video from the last out of his appearance on Tuesday, followed by another showing a grounder to shortstop.

Ground out to shortstop, scored a base hit and throwing error by Cole Tucker, which allowed the runner from second to score. This play actually allowed the go-ahead run to score, which saddled Montero with his first career loss.