Last night, Tim Williams wrote about the situation involving the Arizona Diamondbacks hitting Andrew McCutchen, and how Tony LaRussa shifted the blame to the Pirates pitching inside. The key quote from the article is as follows.

“So what’s happened is some teams have developed this idea that they can pitch in and up,” La Russa said. “Well it’s got rewards because I don’t care if you’re a right-hander or left-hander, that spot right there, nobody gets to that pitch. So it’s a hole for everybody. The problem is, unless you have Greg Maddux pitching, that’s a very risky area to throw in.”

It’s true that the Pirates are a team that focus on pitching inside. At the end of the 2013 season, we highlighted the Pirates style of pitching in the minors, which in part includes pitching inside, leading to plenty of hit batters. It’s now nearly the end of the 2014 season and everything is status quo. The Pirates have five affiliates that lead their leagues in hit batters — Indianapolis, Altoona, Bradenton, West Virginia and Jamestown. Those clubs represent the top five levels of their minor league system. If Bristol pitchers had just one more hit batter, they would lead the Appalachian League.

Without knowing the Pirates pitching philosophy in the minors, you would assume that their pitchers are wild. That isn’t the case at all, they are taught to pitch inside with a purpose and while the purpose isn’t to hit batters, that will happen occasionally when you’re trying to own the inside of the plate. That seems to be a forgotten art in the sport of baseball. Years ago, pitchers worked both sides of the plate and if you crowded the inside, they would let you know. If batters are comfortable in the box and they know they can look middle-away all the time, you’re making them more productive. If you get in their head that they can’t just dig in at the plate, then the advantage slides back to the pitcher.

The Pirates minor league pitchers are middle of the road with their control, which is likely due to the “fastball academy” they put the pitchers through. The key to success for Pirates pitchers is fastball command, and working off the fastball, so their pitchers tend to go fastball heavy compared to other teams. That sometimes leads to poor results that don’t match the pitchers ability, such as the somewhat pedestrian numbers that Jameson Taillon has put up over the years despite the fact he possesses two plus pitches. He had to work on fastball command just like everyone else, and if a batter sees a lot of fastballs, he’s going to look for the fastball and time the pitch.

The Pirates also teach kids to keep the ball down in the zone and of course, own the inside of the plate. The pitchers that grasp this concept the best tend to move the quickest. That style doesn’t lead to a lot of strikeouts, it’s basically pitching to contact to get quick outs, trying to get those outs in three pitches or less. In fact, none of the Pirates minor league teams rank in the top half of their league in strikeouts, and five of them — Altoona, West Virginia, Jamestown, GCL and DSL — are all last in their league in strikeouts. While some would point to that as being an awful performance, it points more to the “pitching to contact” philosophy. The quicker the outs, the more efficient the pitcher, the longer they can go in games.

The eight Pirates affiliates have combined to hit 419 batters. As mentioned, five of their teams lead their leagues, while Bristol is just one behind the top spot. None of the Pirates minor league teams lead the league in walks. Altoona is the closest, with the third highest total in the Eastern League. Neither the DSL, nor GCL Pirates are close to the league lead in hit batters, but covering the DSL closely the last few years, I can tell you that you get the same answer from all the pitchers about their style of owning the inside half of the plate. It’s something taught from the lowest levels on up and with the GCL Pirates this season filled with DSL players from last year, they have obviously carried that pitching method over to the States with them.

The basic summary of the Pirates coaching philosophy is pitch inside, keep the ball down and get quick outs. The excessive amount of hit batters is just a result of the pitchers embracing the philosophy and putting it to use. It would seem like the philosophy in the minors is working its way up to the majors, because the Pirates lead MLB with 61 hit batters this year, one year after leading the Majors with 70 hit batters. 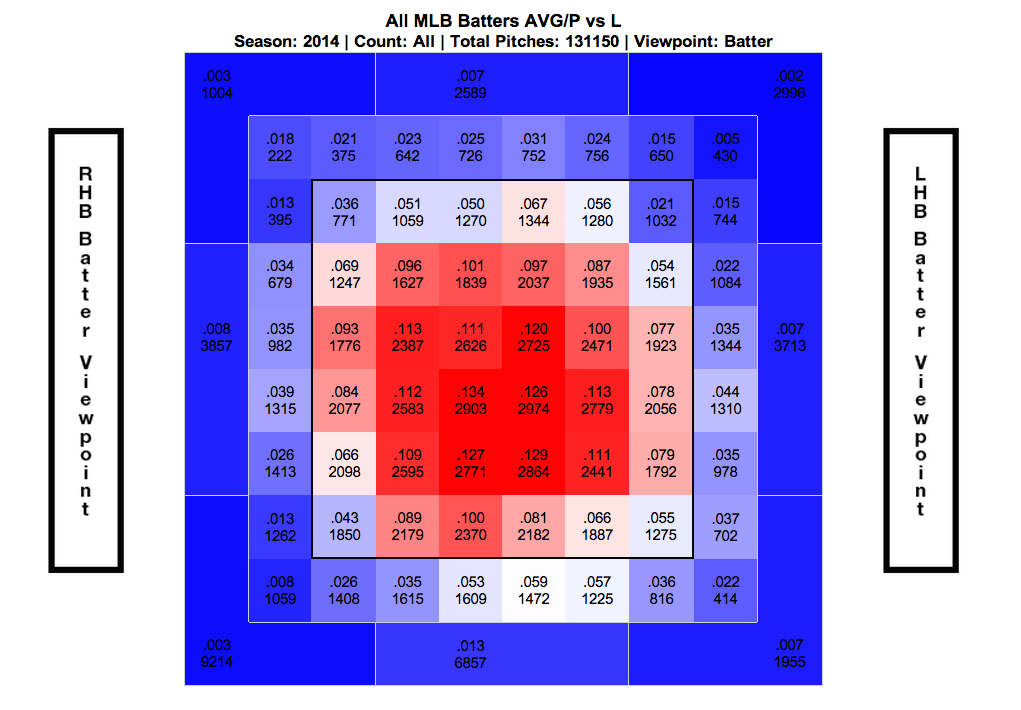 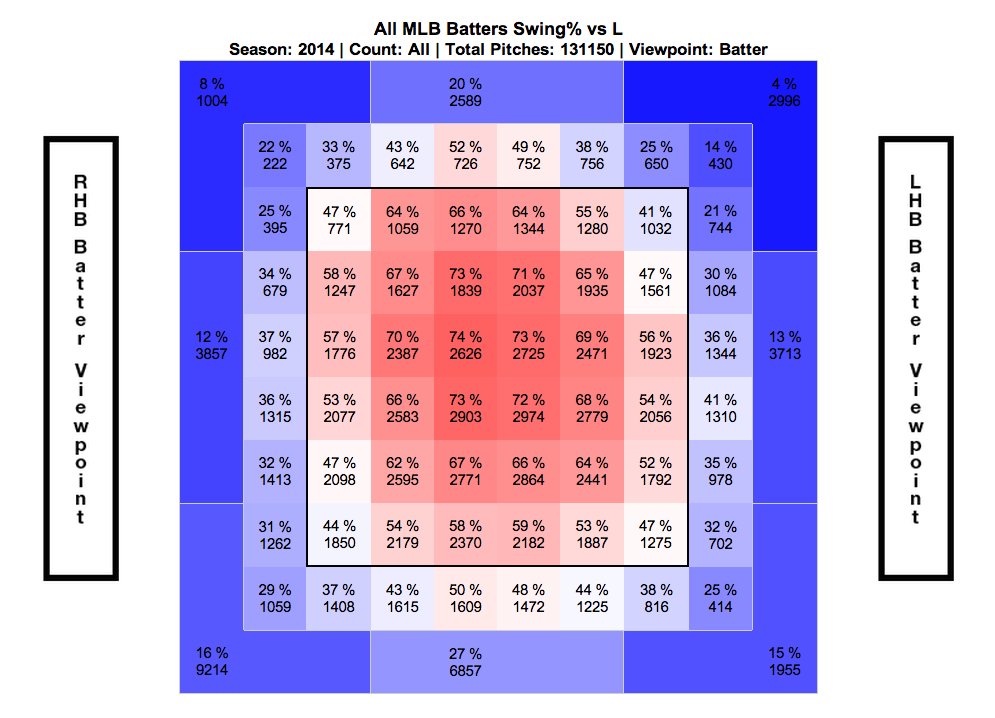 You can see that the average per pitch is low, while the amount of swings is relatively high. The one area to focus on would be the top inside corner of the strike zone. That gets a swing 41% of the time, but has the lowest average of any spot in the strike zone. This is the area that LaRussa specifically complained about, along with the areas surrounding it outside of the zone, which all have the same tendencies. 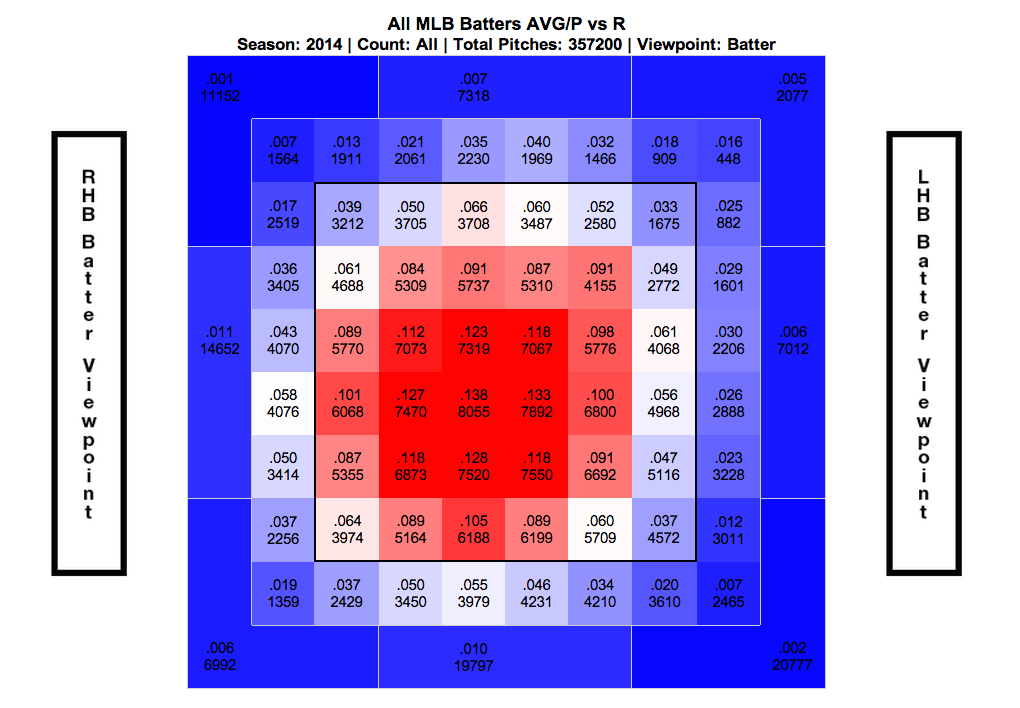 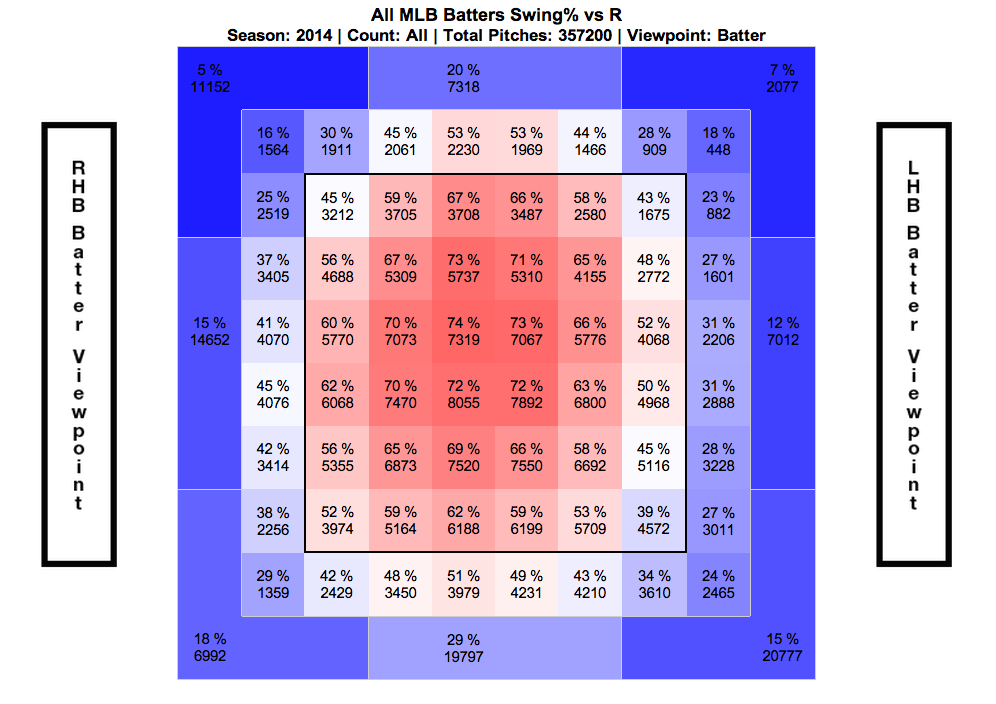 It’s the same story for right-handers. That top corner gets a lot of swings, and yet very few can hit the pitch.

You probably don’t need to look at the heat maps above to know that hitters on either side do a better job of hitting when the ball is in the middle of the strike zone, rather than on the inside half of the plate. There’s a reason why teams pitch inside. LaRussa even said that reason in his complaint about pitching inside.

The Pirates pitch inside more often than any team in the majors. Based on the HBP numbers in the minors, and the low walk rates, we can assume they also carry this approach in the minors. LaRussa seems to be going with the unwritten rule approach that teams shouldn’t pitch inside. But there is no rule saying teams can’t pitch inside, and as long as there are obvious benefits to doing so, we can expect that to continue.

Tim Williams contributed to this story.