Since before Starling Marte arrived in Pittsburgh, I’ve been saying that Marte should be the center fielder for the Pirates over Andrew McCutchen. I said the same thing when he arrived, and have said it ever since.

The same thing existed when Gregory Polanco was on the fringe of making the active roster. I said that he’d be a better center field option than McCutchen, and repeated that after he arrived in the majors.

All along, the Pirates have stuck with McCutchen in center field, seemingly over the notion that he’s their star player and should have the best outfield spot as a result. It’s as if it would be an insult to McCutchen to have him play left field.

That’s something I don’t understand at all. McCutchen is a star because of his offense. He puts up great offensive numbers for any position. As I wrote this week, he had a down year offensively in 2015, but even in that down year he ranked 12th in baseball in wOBA and 11th in wRC+. From 2012-2015, out of 290 qualified hitters, he ranks tied for fourth in wOBA and fourth in wRC+. The guys ahead of him? Mike Trout, Joey Votto, and Miguel Cabrera (with Paul Goldschmidt tied in wOBA). That’s not bad company to be in, as Trout is considered the best in the game, and the other three are first basemen.

The Pirates are getting offense that you’d expect from the top first basemen in the league, only they’re getting it in center field. That makes Andrew McCutchen a star. The problem is that they’re not getting good defense from McCutchen in center field. And keeping him there because of his offense makes no sense, as he’d still be a star in left field (and possibly more valuable).

The outfield of McCutchen, Marte, and Polanco is a potential Dream Outfield©, in part because of the defense and the amount of ground that the three center fielders can cover. But that outfield ranked 14th in the majors in UZR/150 in 2015, along with ranking sixth in Defensive Runs Saved, and ninth in Plus Minus.

A look at the breakdown of the three outfielders shows where the problem lies with every stat: McCutchen. 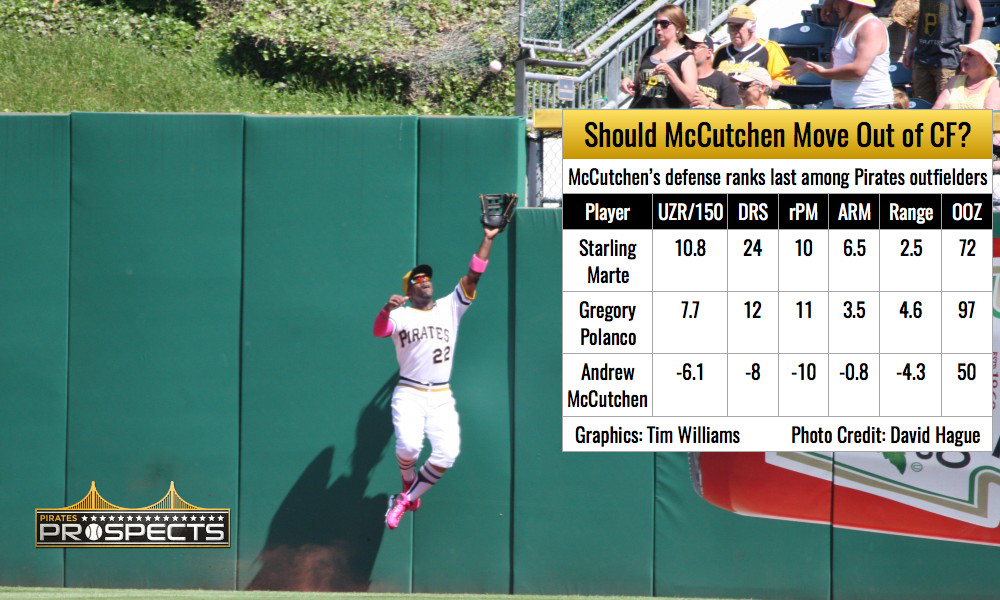 McCutchen ranks way behind Marte and Polanco in UZR, Defensive Runs Saved, and Plus Minus. He also falls behind with his arm, range, and plays made out of the zone. The Pirates have two exceptional defenders in the outfield, and neither of them are playing the spot where you want the best defender. Instead, they’ve got their worst defender in that spot, which is why this outfield full of center fielders ranks lower than they should in a lot of defensive categories.

I’ve been thinking about this problem a lot, and it’s not exactly cut and dry that McCutchen should be moved. He definitely doesn’t have the arm for right field, so that’s out of the equation. That leaves left field as the only option, and left field in PNC Park is just another center field. Plus, I think you’d have more players trying to stretch a single into a double on balls hit to left at PNC than on balls hit to center, which means McCutchen’s arm might be better in center.

The flip side to this is that the Pirates only play half of their games at PNC Park, and there are other parks where you’d rather have Marte in center and McCutchen in left.

There’s also the factor that McCutchen’s range is lower than his counterparts, which raises questions of how you address that in such a big outfield. Do you surround him with guys who can make up for the lack of range to the left and right? Is that why Marte and Polanco had so many out of the zone plays, while McCutchen put up career low numbers in that stat? Or do you put McCutchen in left field, and shade Marte and Polanco to the left a bit to help reduce the impact in left?

Getting McCutchen out of center field would solve the problem of having the weakest outfielder at the strongest position. However, it would create a new problem in left field, where he’d still have a lot of ground to cover at PNC Park, and might have his weak arm tested more often than in center. The fact that Marte and Polanco are surrounding McCutchen could reduce his range issues, but they could also attempt the same thing by fading their positions if he was in left field.

Overall, I’d have to defer to the idea that you want your best defender playing center field. That is not McCutchen. There isn’t a perfect solution here, due to the spacious left field in PNC Park, but moving McCutchen to left field and having Marte in center — fading towards left field — would seem to be the best approach.

That does bring us back to the problem of moving a star player off of his position. There have been theories that the Pirates would need McCutchen to step down and make that move, as they wouldn’t make it otherwise. I don’t know if I necessarily believe that. But regardless of who is making the decision, McCutchen’s defense isn’t helping the Pirates in center field, and a move off the position, with Marte moving to center, would help the team more than it would hurt the team.

McCutchen is the MVP of the team, and he would still be a star in left field. Right now it seems he’s only in center field because of his profile and status, and not because of his numbers and skills. That’s something that doesn’t make any sense, and needs to change if the Pirates want to try to improve their defense going forward.

**2015 Left Field Recap: Why Does It Seem That Starling Marte Is Underrated? Looking at Starling Marte’s season, and how he’s quietly been one of the best position players in the game over the last three years.