PITTSBURGH — Leading up to the NL Wild Card game, all of the focus was on Jake Arrieta. The Cubs’ ace showed exactly why he was getting so much attention tonight, pitching a complete game, four-hit shutout, with no walks and 11 strikeouts. If you ask Pirates fans, they may tell you that Arrieta received some help from home plate umpire Jeff Nelson.

All night, Nelson was calling borderline pitches on the edge of the strike zone as strikes. Arrieta was able to pound this location several times, hitting his spots well. Gerrit Cole didn’t have his best stuff, and wasn’t able to capitalize on the same advantage as often. That made it seem like Arrieta was getting calls that the Pirates weren’t getting. But the reality was that the game was being called the same way.

During the game, I pointed out that the strike zone was being called the same for both sides, and it didn’t go over well with some Pirates fans in the heat of the moment. After the game, Daren Willman posted a chart that showed the Pirates not only got the same treatment, but actually had more favorable calls go their way.

After the game, the Pirates didn’t have any problems with the way things were being called.

“All in all, it didn’t seem to be like there was anything to the game that was out of context as far as calls were getting made one-sided or anything like that, at least from the questioning I did,” Clint Hurdle said. “When you pitch around the plate, you’ve got good stuff, more often than not you’re going to get more calls when you’re throwing strikes and delivering the ball to the edges and moving it up and down in the strike zone.”

Josh Harrison didn’t have a problem with his at-bats, but did notice this from the field.

“My pitches were pretty clear-cut,” Harrison said. “But from the field, or in the dugout, there were a few times that I was definitely questioning.”

The interesting thing about this is that Harrison actually did see a questionable call in the fourth inning. The first pitch he faced in the fourth inning was questioned by Pirates fans after being called for a strike. The only problem? Gerrit Cole got the exact same call a half inning earlier to strike out Addison Russell, as seen in the chart below. 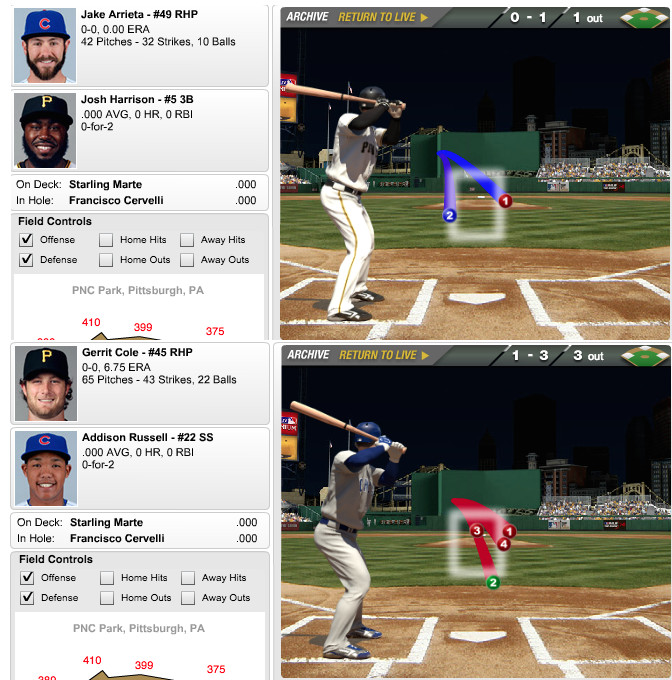 Maybe Harrison just didn’t want to complain about his pitches, as he did offer a very specific thought on the trends tonight.

“You can see there were a few from both sides,” Harrison said. “I feel like we had quite a few with pitches on the outer half to righties.”

Things really got heated in the fifth inning when Arrieta struck out Jordy Mercer and Pedro Alvarez on borderline pitches. That’s when I started noticing a trend that took this whole matter to a different perspective.

The entire night, I was seeing people complaining about the strike zone, and couldn’t figure out what they were talking about. I was following the strike zone in the press box via MLB Gameday, and the Classic version of Gameday (this is my usual press box set up, with the new Gameday to get exit velocity info, and the classic to go back and see the location and sequence of older pitches). Sean McCool, who was covering the game with me tonight, pointed out before that inning that the strike zone on TBS was much smaller than Gameday. The pitches to Mercer and Alvarez confirmed that.

Let’s take a look at the difference in location for that strike three to Alvarez. First, this is what you probably saw if you were watching on TV. 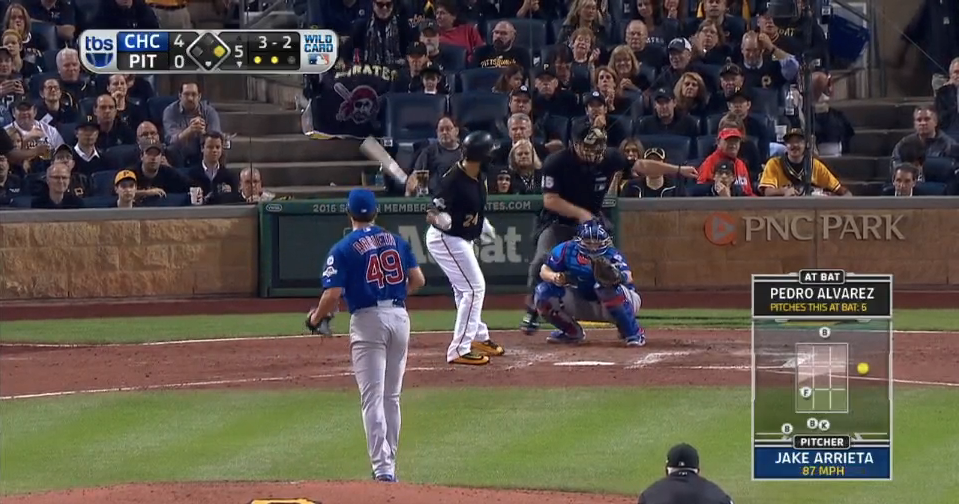 Based on that strike zone, there’s no way this is a strike at all. Anyone watching this would have to believe that the umpire is out of his mind, and not calling the game fair, especially since Jordy Mercer was struck out looking on a similar outside pitch in the same inning. But it gets more complicated when you get to the Classic Gameday view. 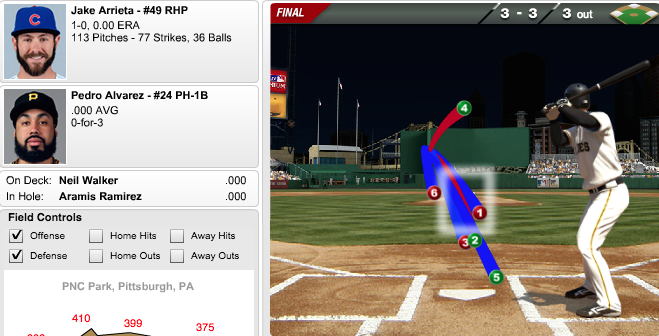 This isn’t a clear-cut strike, but it’s closer to being a borderline call than the TBS strike zone. And the new Gameday — which features Pitch F/X and all of the Statcast data — had it even closer. 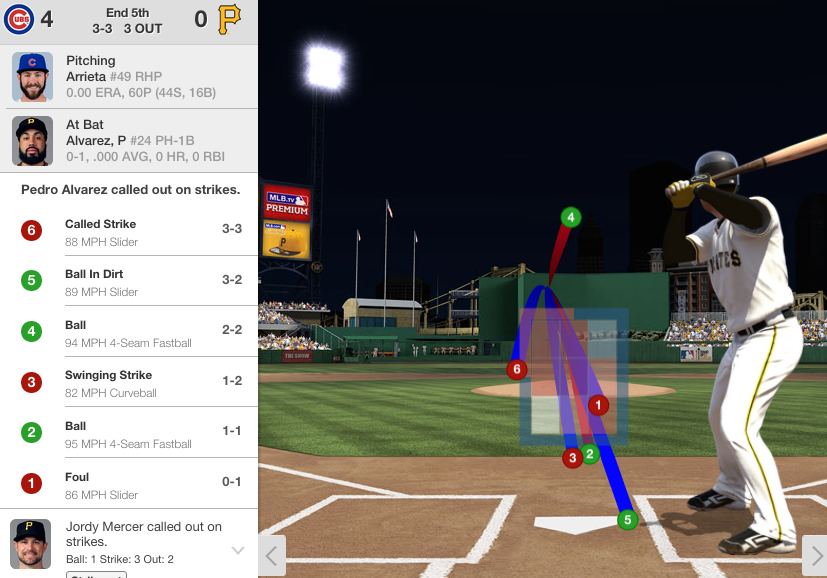 That area could be considered outside of the zone, but it’s on the borderline, and any pitch thrown there is fair game to be called a strike. If your team gets that call, you’re not thinking you just lucked out. And if your pitcher doesn’t get that call, you’re complaining about the umpire.

The interesting thing is that after posting these images, I got messages from people who had the MLB App, which featured a totally different strike zone image that had the pitch way outside, similar to TBS.

I took an objective view tonight when discussing the strike zone. It would have been easy to just say that Arrieta was getting the calls, and that was the reason for him pitching so well, and a fair umpire would have led to a different result. That may have placated a lot of Pirates fans who were angry with the stance I took. It may have even gained me a lot more re-tweets and favorites and new followers and potential subscribers. But I was going off the information I had, which showed these as borderline strikes that were being called all night. And the people who were angry were going off the information they had, which showed these pitches way outside.

This brings me to my next subject where I’m going to be totally objective, even if it means arguing against something I’d really like to see. That argument: We’re not ready for robot umpires.

There’s nothing I hate more than the idea of a constantly changing strike zone, which all depends on the guy behind the plate that night. Last night in the AL Wild Card game we saw an umpire with a consistent trend that Dallas Keuchel was able to take advantage of. Tonight, we saw a totally different strike zone that Arrieta was able to take advantage of. If you want to know why offense is down, this is patient zero. Just listen to Josh Harrison explain how difficult these calls make things.

“It’s hard to play catchup, especially when the guy can start pitching to the corners,” Harrison said. “It’s hard enough to hit. When a guy is getting [calls] a little bit off, it’s even harder to hit. We had our chances. We had guys on, hit some balls hard. It [isn’t] all about the strike zone. But it does play a little factor when you feel you’ve got to cover a little bit off. And you take a pitch and it’s called a strike, and if that’s a strike, I’ve got to swing at anything out there.”

Sure enough, that happened on both sides. The pitch that Tony Watson got Dexter Fowler to fly out on was outside, even by Gameday standards. It’s something Fowler should have laid off from. But Fowler had an 0-1 count and probably had to protect that outside edge, which had been called all night for both teams.

The simple solution here is that robot umpires would be the best replacement for real umpires. You remove the human element. You remove mistakes. There would be no more variance from umpire to umpire, giving you one true strike zone, rather than 15 different strike zones across baseball on any given night. We have the technology that we can instantly see where a pitch ends up right when it hits the catcher’s glove. So why wouldn’t it make sense to have balls and strikes automated?

This also raises a question as to how this can happen. PNC Park is equipped with technology to track pitches. You’d assume that everyone was using the same technology. So how can you get such different results? The only explanation would be the size of the strike zone box drawn in each format varies, which comes with an easy solution — just have a uniform strike zone for everyone displaying Pitch F/X details. But MLB doesn’t even have that, with three different zones for three different platforms.

Until we have this, the idea of robot umpires has to be on hold. It’s something that I think baseball definitely needs, as the variance and inconsistent game calling between different umpires is one of the worst things in the game right now. But unfortunately, we’re not to a point where technology can provide the answer.

**I’ll have more analysis from the post-game tomorrow morning and afternoon, plus a look ahead at the future of this team tomorrow night. I want to thank everyone for a great season! That said, we write about the Pirates 365 days a year, so subscribers won’t even notice a break in our coverage of the system.

**The Two Cubs Batters That Defeated Gerrit Cole and the Pirates. Sean McCool breaks down the two Cubs hitters who got to Gerrit Cole tonight.

**Sean Rodriguez and Tony Watson Open Up About the Brawl. Rodriguez got very candid about what happened tonight.

**Pirates Put Defense First With Sean Rodriguez Starting Over Pedro Alvarez. This decision didn’t really matter much, but sparked a ton of controversy.

**Take Advantage of FREE Pirates Prospects Day With Links to Our Best Stories This Year. Our best links of the year. I’m going to be extending the FREE day to an extra day, mostly because it’s 3:15 AM, and I’m just leaving the PNC Park press box, and probably won’t even be awake at 8 AM when it was scheduled to end. So take some time tomorrow to check out some of our best articles from the year.
IMPORTANT: You will need to update your password after the switch to the new server in order to log in and comment. Go to the Password Reset Page to change your password.