The Cardinals’ offense needed little time to get things started as they were able to solve Morton early. Matt Carpenter led off the game with a triple, and later scored when Morton induced a groundball double play. The inning didn’t end there, as Jason Heyward ripped a single to right field and scored on a Matt Adams double off of the Clemente Wall to give the Cardinals an early 2-0 lead.

Morton’s struggles continued into the third inning. Carpenter doubled to lead off the inning, Jon Jay was then hit by a pitch for the second time in as many as bats, and Jhonny Peralta walked to load the bases with one out. With lefty Jason Heyward coming up to bat, Clint Hurdle wasted no time turning to his bullpen. The early hook to Morton did not stop the bleeding, however, as left reliever Bobby LaFromboise promptly gave up a grand slam to Heyward, extending the Cardinals lead to an insurmountable 6-0.

That was all the Cardinals would need on this night, as Cardinals’ starter Lyons easily navigated through seven scoreless innings. The Pirates’ bats produced just six hits and one insignificant run against the Cardinals tonight. The Cardinals added five more runs off of the trio of Arquimedes Caminero, Vance Worley and Rob Scahill to finish the night with 11 runs.

Charlie Morton’s struggles against left-handed hitters continued tonight, as Cardinal lefties (not including pitcher Tyler Lyons) went 4-for-5 with a triple and two doubles. Morton also hit lefty Jon Jay twice, once with a back door curveball and the other with a sinker that sailed too far inside.

Morton’s inconsistencies this season have had a direct correlation to his effectiveness against left-handed hitters. 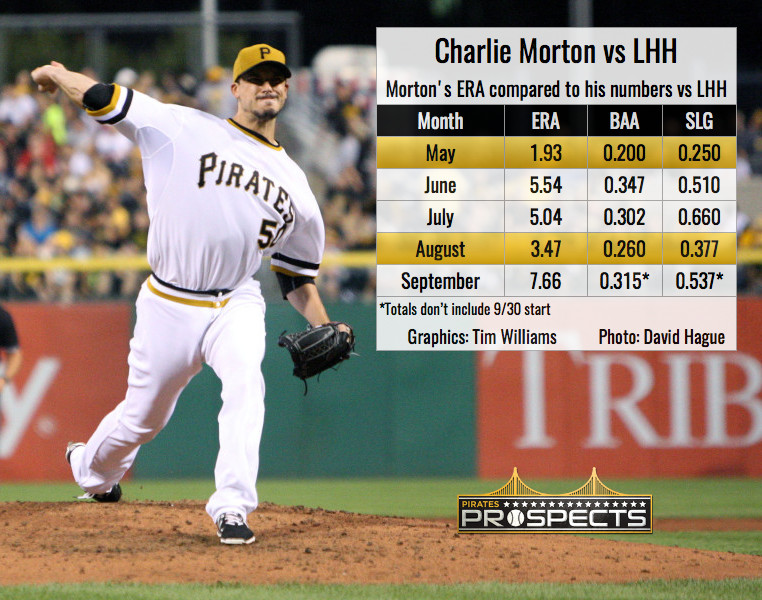 It is not uncommon for a sinkerball pitcher to have noticeable platoon splits against opposite-handed hitters, however Morton’s splits are especially alarming. Lefties have been feasting on his sinker more often than not this season. As seen in the graphic above, Morton’s most productive months came in May and August. It’s no coincidence that in those months, left-handers batted .250 and .286 off of his sinker, according to Brooks Baseball. During the months in which he’s struggled, however, lefties have crushed the offering. In September, lefties were hitting his sinker at a .347 clip going into tonight’s start.

What has been puzzling to Morton is that his command of his sinker has not always been the issue. Morton believes that lefties are recognizing the pitch out of his hand far too easily, leaving him with marginal room for error with his location.

“I think there is going to have to be some revisiting, because I’ve gotta buy myself some wiggle room,” a dejected Morton said after the game. “I can’t be coming back here and doubting myself over missing a spot by three inches, two inches. It can’t be like that, there has got to be something that I can buy myself the room with on my delivery.”

Whether it is adding another pitch to his repertoire that will make him more effective against left-handed batters, or if it is an adjustment to his delivery that will to add more deception, it’s an issue that Morton plans to address this off-season.

“[Ray Searage and I] already discussed incorporating a hard slider, a cutter – which I’ve done in the past,” Morton said. “I scrapped [the cutter] because, after Tommy John, I was more focused on my arm-action and my delivery, but there has got to be something.”

It is probable that tonight was Morton’s last start of the 2015 season. He is under contract with the Pirates through 2016, so it is likely that he will be back with the club next year. How Morton ultimately decides to combat left-handed hitters going into next season will be a story to watch.

No Changes to Weekends’ Rotation

The Pirates aspirations for a division title have officially come to an end, but they still have not clinched home field advantage for the Wild Card game against the Cubs on October 7th – their magic number to do so is two.

According to Hurdle, the rotation that he presented before tonight’s game for the final series against the Reds will not be changed despite tonight’s loss. Francisco Liriano will pitch Friday, A.J. Burnett will pitch Saturday, and J.A. Happ will close out the regular season schedule on Sunday afternoon.