The 2016 Prospect Guide is now available for pre-sales, and will be released in mid-December. This will be the sixth year that we’ve released the book, although the first year that the book will be released while we’re a subscription site. Due to that change, we have some special offers where subscribers can get the book for FREE under our Top Prospect Plan, or at a big discount under our Annual Plan. Details for each promotion can be found below.

Each year, the Prospect Guide provides the most in-depth look at the Pirates’ minor league system. It features profiles and reports on every prospect in the Pittsburgh Pirates’ minor league system. The reports come from the information gathered from our writers throughout the year, after conversations with the players, coaches, and scouts in and out of the organization. Due to the new subscription model, we had more live coverage this year than ever. That ranged from having live coverage of every level, to covering the Dominican Summer League live, to a week of live coverage of the Arizona Fall League. As a result, the 2016 Prospect Guide will be jam-packed with information that you can’t find anywhere else on players in the farm system.

You can now pre-order the 2016 Prospect Guide, which is expected to be completed right after the 2016 Winter Meetings, and is expected to ship in mid-December. The book is expected to arrive in time for Christmas, making this a great Christmas present for any Pirates fan you know. We also offer gift subscriptions, or gift packages that include the book and a one-year subscription to the site, while receiving the discount that Annual subscribers receive for the book.

Every year we have a huge rush of orders when the book is released. For that reason, we can only guarantee that everyone who pre-ordered the book will have their order shipped out in the first shipment. The book is expected to be completed and taken to the printer on December 11th, and shipped out the following week. We can’t guarantee Christmas delivery, as that is in the control of the USPS. However, the USPS says that items shipped by December 19th are expected to arrive by Christmas, and we expect to ship the books out before that date.

Last year, almost all of the books from the first shipment were received before Christmas. The only way to guarantee that you get your book in the first shipment this year is to order it during the pre-sale period. To pre-order the book, head over to the products page and place your order.

To thank everyone for subscribing in our first year as a subscription site, I wanted to offer discounts for the 2016 book.

Anyone on our Top Prospect Plan will get a copy of the 2016 book for FREE! The book probably won’t be free in future years, but I wanted to give a free copy this year to those who made the biggest commitment to the site during our first year under the subscription model. And since the book ships for free this year, you pay nothing at all (unless, of course, you want to buy a few copies for friends). Your code for a free book will be e-mailed to you today.

Annual subscribers will get $10 off your first book, making it $15 total, shipped. This includes anyone who signed up for our DraftKings promotion, or anyone who received a gift subscription. Your discount code will be e-mailed to you today. You also have the option to upgrade your subscription at a prorated price, and get the 2016 book for free. Your three-year subscription would start today, and run through the end of November 2018. Putting that in perspective, you will be subscribed to the site longer than Andrew McCutchen is under contract with the Pirates, AND you’ll get the 2016 book for free.

We don’t have any discounts for monthly subscribers, although I encourage you to upgrade to one of our longer plans if you’re interested in buying the book, as it will be much cheaper for you in the long run.

To upgrade your plan, just go to the subscription page of the site while logged in to see your prorated price. If you haven’t subscribed yet, you can find all of our plans on that page.

The best deal we have for non-subscribers or monthly subscribers is with our promotion through DraftKings. If you’re not already a DraftKings member, you can sign up for a new account through us (using this link), and after depositing a minimum of $5, you will get one year of site access for free! You will also have the option to upgrade to our Top Prospect Plan for an additional $50 when you sign up for your new site membership.

Upgrading to the Top Prospect Plan is the best deal, as you save a total of $77.64 over a three-year period. It’s actually cheaper to get the three-year plan on the DraftKings promotion (which gets you a free copy of the 2016 Prospect Guide) than it is to subscribe to the site for one year under the monthly plan, while also buying the book. 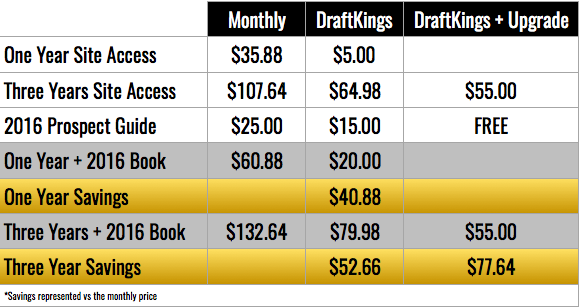 After you have signed up for a new DraftKings account (can’t be an existing member), deposited at least $5 in your account, and participated in a contest, send an e-mail to Javier Vargas at DraftKings (jvargas@draftkings.com) and let him know you are participating in the Pirates Prospects subscription promotion. Javier will confirm whether you’ve met the requirements, then will contact me so I can give you a coupon code that will allow you to set up your subscription.

In the past, we’ve put either the Pitcher of the Year or the Player of the Year on the cover. In a way, we continued that trend this year, as Josh Bell is on the cover for the second year in a row and was our Player of the Year for the second year in a row. However, the upcoming season represents a unique circumstance, with five of the top ten prospects in the system projected to make the jump to the majors. As a result, we decided to go a different direction this year, and put those five players on the cover, with some very fitting PNC Park and Pittsburgh backgrounds mixed in.

Sean McCool designed the cover, and did an outstanding job, creating easily the best cover we’ve had of any of the books. The cover features Tyler Glasnow, Josh Bell, Jameson Taillon, Alen Hanson, and Elias Diaz. Those five players could eventually go on to become three of the eight starters on the field, and two of the five starters in the rotation. Fortunately, we don’t have any documented cover jinxes. You can check out the cover below. 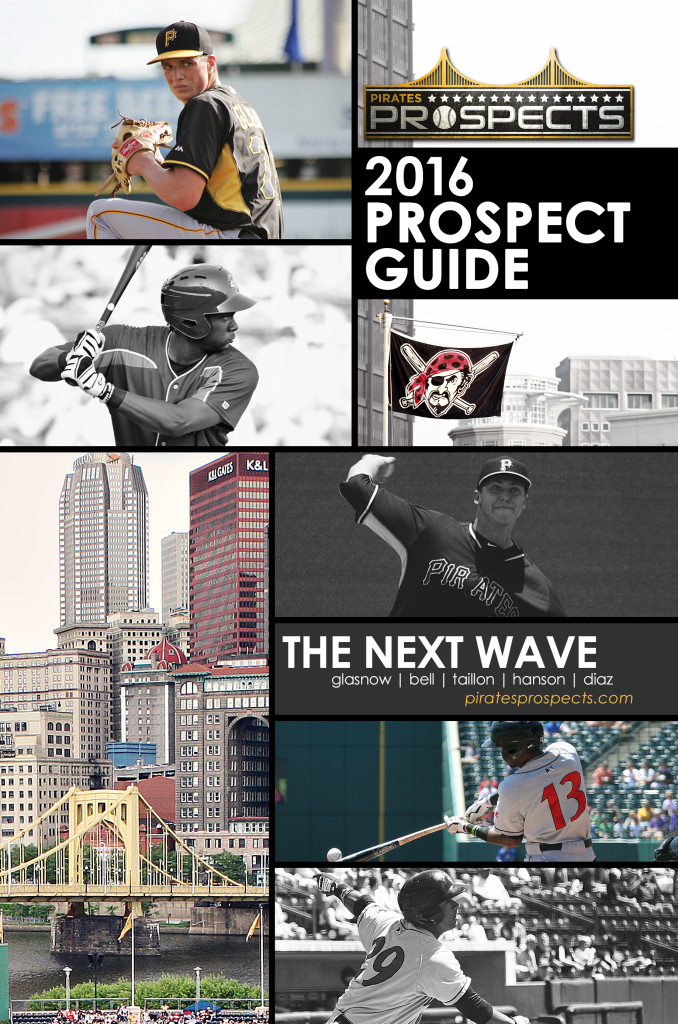 We rank every player in the system using a 2-8 scale, with every writer submitting their own grades on the players in the system. These grades include local writers, who submitted reports for the players they covered, along with regional writers, who submitted reports on players from multiple teams. All of the rankings are combined to give an overall future potential for each player. We project the likely upside for each player, using the following scale.

Everyone involved submits floor and ceiling rankings, to get an idea of the risk involved with each player. This is very similar to the process that Baseball America added a few years ago. I like that, because it shows how close players really are in talent. In some cases you could have a guy outside the top 50 who is ranked just as good as someone in the top 50. In other cases you could see how there’s not much difference between prospect number 15 and prospect number 25. Since this is the third year we have taken this approach, you will be able to look back at the last two books and compare the quality of prospects in the system between the three years.

To go along with the cover, there will be an article about “The Next Wave” of prospects to reach Pittsburgh, with a specific focus on those five guys so prominently featured. This article will be exclusive to the book.

The pricing for the book is easy this year: the book costs $25 and ships for free. The price of the book has gone up a bit, due to the expanded content in this year’s version. However, the free shipping represents a discount over what you would have paid, and ends up making the book cheaper to ship than previous years. As an example, last year the book shipped for $25.50. This year’s book will ship at a lower price, and will have more content than last year’s version.

We have a very limited supply of older books, with about a dozen of the 2012 and 2014 Prospect Guides on clearance for $1 each, and a small amount of the 2015 books on sale at a discounted price. These are first come, first served. They will ship out with the rest of your order in December.