BRADENTON, Fla. – Pittsburgh Pirates’ ace Gerrit Cole had his second start of Spring Training today, throwing a three inning outing at Pirate City against the New York Yankees’ Triple-A team. Cole gave up one run on two hits, while striking out three. He was sitting 94-97 MPH with his fastball, touching 98 once, which was encouraging. But for the most part, Cole was focused on getting his work in, which is why the Pirates sent him to Pirate City today, rather than Clearwater.

“It’s nice coming out here and getting your work in. That’s for sure,” Cole said. “Throw some changeups in funky counts, see if you can make the pitch. There’s no risk. There’s only reward. It’s a good chance to just get your work in.”

Cole mixed in a few changeups today, with the pitch sitting in the 89-90 MPH range. He was even throwing the pitch to right-handers early in counts, as evidence of those counts where you don’t normally throw a changeup. It’s a pitch Cole didn’t throw much of last year, but it has always been a good offering for him.

“[I’m] definitely trying to throw it more now,” Cole said of the changeup. “It’s still progressing. Just trying to repeat the same motion as the fastball, and the location will come with more consistency. There’s no substitute for continuing to throw it.”

Cole said that he’s on track to make his first start during the first week of the regular season. He said that his final start before his 2016 debut would be a six inning, 100 pitch start. Right now, if he adds an inning every five days, he would make that start around April 2nd, when the Pirates play the Reds in Indianapolis. However, he said that the plan isn’t to have him start that game.

You can probably expect more starts at Pirate City, since those are highly controlled, allowing a pitcher to exit an inning if he’s thrown too many pitches. This happened in the first inning today, when Cole gave up an RBI double, followed by the inning coming to an end. He came back out and struck out two batters the next frame, in a scoreless inning. That inning was capped off by a great diving stop by Anderson Feliz, who was added out of independent ball in February. 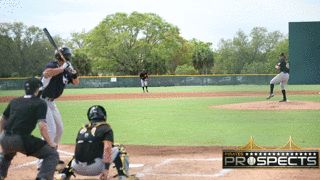 Cole also was able to get in some situations, like having a runner at third base with one out. He got out of the jam with a grounder to third, with the runner being thrown out at home.

“You try to make it as game-like as possible,” Cole said. “That was a good at-bat. We were definitely trying to either strike him out or put them on the ground. I was right along with [catcher] Reese [McGuire] right there. I didn’t shake him off once, and I thought he was on with everything he called.”

Overall, Cole said that he felt good as he progressed to three innings.

“I thought the curveball was really crisp today, and that stayed with me through the outing,” Cole said of the pitch, which was 81-82 MPH. “The fastball command got progressively better. I threw some changeups, threw some sliders. It felt good.”

Here is every pitch that Cole threw today.

Intermittently throughout his young career, Tyler Glasnow has run into some trouble with command with many of his offerings. In his first spring start since being sent to minor league camp, Glasnow showed no signs of the aforementioned struggles. He was crisp with his command, and had velocity to go with it. This allowed Glasnow to toss three scoreless frames in the Double-A game at Pirates City on Friday.

“I felt good,” Glasnow said. “Just went out today and really tried to just go out and compete and look at a glove and throw to it. It ended up being a lot better than the past. Just thinking about some stuff. It just feels good to go out there and be athletic.”

In the first, Glasnow was around the zone and did not miss bats as much as many are accustomed to seeing, but he got three weak ground outs to complete a quick first frame. This was a big difference from his starts in Major League camp, where he struggled each time out in the first inning. Glasnow worked predominantly with his fastball in the first inning, which was sitting between 93 and 95 MPH, touching 97 a couple times.

In the following two frames, Glasnow mixed in his curveball and changeup. The only blemish in the game was a curve that he hung and paid for it with a sharp line drive single back up the middle. He tossed four changeups, all different speeds between 88 and 92. With the curveball, he was as low as 75, but sat between 77 and 81.

Glasnow said that working on those off-speed pitches was something he didn’t do a lot of in Major League camp, since he was trying to record outs and make an impression. These were similar to Jameson Taillon’s comments on Wednesday.

“I think in terms of working on pitches and stuff, like today, there’s some things I definitely wouldn’t have done in a game,” Glasnow said. “Here, it’s more I’m already here now. I did what I should have done in big league camp today, but it’s nice coming out and being able to have those pitches where you can throw a changeup in a weird count, or throw a fastball in a weird count.”

With the velocity he saw on Friday, Glasnow was also able to work up in the zone, which allowed him to pick up a second inning strikeout. Additionally, the strong command allowed him to stay ahead of hitters and keep them guessing. All are keys to a successful outing for the tall right-hander. Glasnow said that he now has confidence in all three of his pitches and will look to build on the momentum in outings to come.

Here is a strikeout Glasnow recorded in the third inning.

**Jung-ho Kang took at-bats today, and later ran the bases. For a full update on Kang’s rehab and video of him running, check Tim’s article from earlier today.

**Kevin Kramer will start at Bradenton and will be getting most of his playing time at second, despite being drafted as a shortstop. This assignment is due to Kevin Newman also starting at the same level. Kramer acted as the DH in the Double-A game Friday, but took some side work at second base while his duties were not required in the contest. Kramer hammered an elevated fastball for a double in the third, which just missed leaving the park. He also reached base on a sharply hit shot at the third baseman before taking a pitch off his lower leg in his next at bat. After being slow to get up, Kramer was eventually able to take his base and stay in the game.

** In his comeback attempt, Daniel Bard struggled on Friday in his outing. Of his first three pitches, two reached the backstop and the other hit a batter. In addition to erratic command, Bard hit a second batter and struggled with walks. The inning was forced to end early due to a high pitch count before he was able to work his way out of it. If these struggles become a constant, the comeback bid will not last long for the right-hander. The only good news was that the fastball was consistent around 95 MPH, with a couple as low as 92 and 93. He just needs to get it over the plate.

**Sam Street and Montana DuRapau each had strong and scoreless one-inning outings on Friday, while neither threw a pitch over 91 MPH in the Double-A game. Street baffled Yankee hitters with his deceiving sidearm motion, and struck out the first two hitters he faced. The third hitter was retired on a weak groundout. While DuRapau did not have the strikeouts, he shared the common easy inning theme. Neither pitcher had overwhelming stuff today, but each has command and just the ability to get hitters out. Street was 84-87 MPH with the fastball and threw two sliders at 73 and 77. DuRapau was 89-91 MPH on the fastball and 83-86 MPH on the slider. He also threw one curveball at 79 MPH. Street is typically in today’s velocity range, but DuRapau was higher last year, working in the 90-93 MPH range most of the season.