PITTSBURGH – To borrow from a business-school cliché, it took Jake Arrieta 27 years to become an overnight success.

The former top-100 prospect, the Olympian who dominated college and the minors, was a Major League flop. Arrieta had gotten chance after chance in Baltimore, and opponents flattened him to the tune of a 5.46 career ERA and more free passes than a 24 Hour Fitness.

“He always had electric stuff, and the ball always seemed to move,” says Ben Zobrist, who faced Arrieta while playing for the Tampa Bay Rays. “In Baltimore, we saw him as a guy that you just need to wait him out… we would score based on him walking people.”

“His command is what’s taken the greatest leap forward, the ability to move it two different sides of the plate,” says Zobrist. “When he needs to throw a strike, he throws a strike. He couldn’t always do that.”

That’s the simple answer to what’s been a complex Arrieta Renaissance with the Chicago Cubs. He will tell you himself that it has taken a lot more.

Clashing With a Pitching Coach

So why was young Jake Arrieta a failure in Baltimore and older Jake Arrieta a star in Chicago? Passan writes that Arrieta and other top O’s prospects “chafed under then-Baltimore pitching coach Rick Adair.”

Arrieta was ranked as highly as the 67th-best prospect in the game by Baseball America. He had a 1.85 ERA over 73 Triple-A innings in the last season before he got called to the bigs.

But when he reached the Majors, Passan writes, coach Adair took away his cut fastball and the two never developed a rapport.

I asked Arrieta, what would he tell other top pitching prospects as they move to the Majors?

“Just be in control of your career,” Arrieta said. “Do what’s best for you.”

Generic motivation? Or a veiled swipe at his Baltimore coaching?

Well, off to Chicago he went.

“There’s something to be said for letting players be themselves,” says Cubs president of baseball operations Theo Epstein.

The cutter (or is it a slider?) returned. The Cubs made other mechanical changes too, giving him better balance on the mound, not leaning back to second base so sharply.

“Sometimes guys can’t perform at their best unless their mechanics are true to themselves,” Epstein says. “Turns out he was one of those guys.”

Some national-media types who don’t really watch baseball, let’s say their names rhyme with Grephen A. Grith, want to imply that Arrieta’s success is thanks to performance-enhancing drugs.

It’s not. And that’s all I’ll write in this section.

How Does This Relate to the Pirates?

The larger question is this, and it’s an important one when writing for a site called Pirates Prospects…

When you see the awakening of Jake Arrieta, now age 30, a man who by all accounts always had the talent to be a star pitcher but couldn’t sustain success, what lessons do you take for finding other Arrieta’s?

“It reinforces the power of the change of scenery,” says Epstein. “We do try to identify [those] guys. It’s a powerful phenomenon that can’t be fully explained all the time… a feeling of rebirth that can be really empowering.”

I followed up with Epstein, what characteristics can make a change-of-scenery guy successful?

“Belief in one’s self,” he responded.”The ability to handle adversity.”

Sound like new-age nonsense? A hippie-dippie ‘trust yourself’ attitude? Maybe so. But smart baseball dudes believe it.

“As opposed to being a contrived version of himself, he just became original Jake. All of a sudden, it worked,” says Cubs manager Joe Maddon. “A big part of that is your brain.”

Neither did I, Joe.

The Pirates have a pair of talented pitchers close to knocking down the big-league door in Tyler Glasnow and Jameson Taillon, along with other prospects like Chad Kuhl, Steven Brault, Trevor Williams, and Nick Kingham. And there’s no reason to suspect they would clash with beloved pitching coach Ray Searage. But we know There’s No Such Thing As A Pitching Prospect, and odds are at least one of the top two gifted guys, and a few of the lower ranked guys, will struggle in the Majors.

The Arrieta example shows talent can find a way, though, when there’s chemistry with coaches and a willingness to put in the work and elbow-grease the problems.

“If they’ve got great stuff, yes,” Zobrist says. “But not everybody has the mindset that he’s got; he’s very meticulous and precise in what he’s trying to do.”

The fastball, the curveball, they were always there, even in Baltimore. The differences are in the mechanics, the addition of that slider/cutter/slutter ($1, Harry Pavlidis) and that newfound ability to locate the pitches in a way that twists hitters up like a pretzel.

One postscript. At the end of a media scrum, I showed Arrieta this Twitter exchange with a “fan” back in 2013. 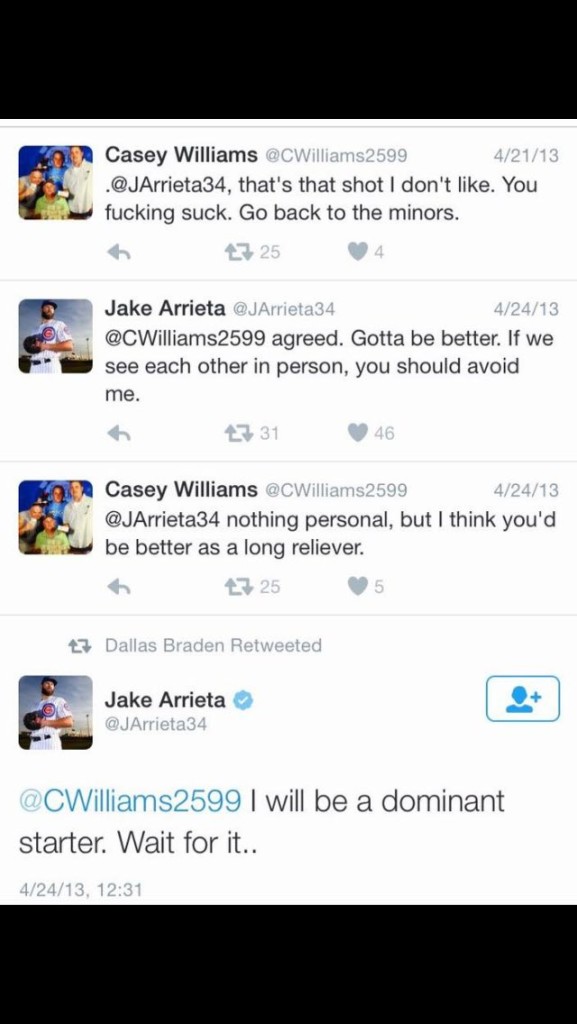 It was just after Arrieta had given up five walks and five runs over four innings in a home loss to the Dodgers, a game that turned out to be the penultimate start of Arrieta’s Orioles career.

I showed the screenshot to Jake. Did he remember it?

Do you still keep those things in mind, I asked?