The Pirates called up Adam Frazier today, possibly for the long-term as the move was paired with Cole Figueroa being designated for assignment. There were a lot of talented infield prospects in Indianapolis, and Frazier becomes the first to make the jump to Pittsburgh, after posting a .333/.401/.425 line.

Frazier was our 27th ranked prospect coming into the season. He was 28th in the system heading into the 2014 season — the year after he was drafted — and 41st overall heading into the 2015 season after a down year in Bradenton. So while he’s been on our prospect radar since day one, there might still be some Pirates fans who don’t know the details about his game. As usual, we’ve got you covered with the book on Adam Frazier.

Where Did Frazier Come From?

The Pirates drafted Frazier in the sixth round of the 2013 draft. He was a top college shortstop in the draft, ranked 142nd overall by Baseball America. He was moved quickly through the system, going to Bradenton his first full year in pro ball. He wasn’t originally on the prospect radar, due to his poor start in Bradenton. However, he did show the skills that year to justify his prospect status. Those skills translated to the stat line in Altoona last year, where he had a breakout season at the plate, posting a .324/.384/.416 line in 377 at-bats. He has continued that hitting this year with Indianapolis, putting up a .333/.401/.425 line in 261 at-bats.

The key to Frazier’s game is his hitting ability. He has great contact skills and hits to all fields, with a good line drive approach. He doesn’t have any power, but his speed allows him to take extra bases, especially with his hustle on the bases and heads up play. One thing that has stood out to me this year is his ability to hit the ball where it is pitched. Between seeing him live and watching video, I’ve seen several times this year where he’s taken a low and away pitch and sliced it to left field for a single, or a double when he’s hustling out of the box.

Here is a location of Frazier’s hits this year, via MLBFarm: 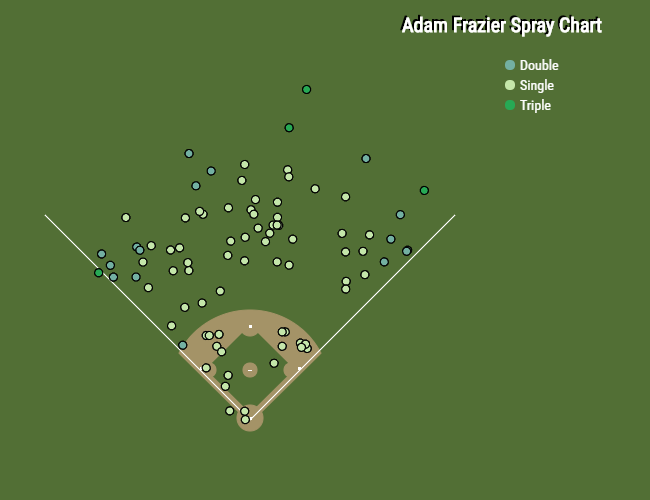 Along with his contact skills, Frazier shows strong plate patience. He has a 29:27 BB/K ratio this year in Triple-A, and has a career 12.1% strikeout rate. The impressive thing there is that his strikeout rate has dropped every time he’s moved up a level. Between the contact skills and the plate patience, Frazier has what it takes to hit in the majors, although he doesn’t have the power to be an everyday player.

Frazier was drafted as a shortstop, and stuck at the position in Bradenton in 2014, despite some poor results. He has the range for the position, and the arm strength is fine, but his hands aren’t the best, which is why he doesn’t project to stick at the position for the long-term. He moved to a super utility role last year, learning the outfield out of necessity to get playing time in Altoona. He spent most of his time this year in the outfield, while also playing some second base, and two games at shortstop.

He doesn’t have the best defense in the outfield, lacking the arm strength you’d want from center field, and taking some poor routes. This can be expected for an infielder making the transition. He does have the range to play the outfield, and with his lack of arm strength, left field is the best position for him. He can play shortstop in a pinch, but second base is his best position in the infield.

Frazier has above average speed, which doesn’t show up in the stolen base column, at least not when talking about his success rate. You will see that speed show up when he hits a soft line into the gap, or a ball down the line that gets into the corner. He’s great at taking extra base and part of that is his speed, the rest is just pure hustle. You will also see it in the outfield when he has to go a distance for a fly ball. His problem is that he doesn’t get the most out of his speed once he is on the bases.

Up until this season, Frazier was 30-for-53 in stolen bases in his first three years. Not a good success rate and not a huge amount of attempts. The Pirates have him running a lot this season and he hasn’t had much success, going 17-for-32, which doesn’t include multiple pick-offs. He gets horrible jumps, either leaving too late or too early each time, getting thrown out by a big margin, or having pitchers pick him off. Those issues will likely keep him from running too much in the majors, but he will still have value on the bases by taking extra bases on hits by the players behind him in the lineup. Frazier will also turn his own singles into doubles, which has led to 20 extra-base hits from someone with well below average power. – John Dreker

What is Frazier’s Upside?

I’ve used the word “hustle” a lot in this write-up, and I think the only other person who would get that word usage this often is Josh Harrison. Frazier compares to Harrison in a lot of ways, but the biggest way would be his baseball IQ. He’s a heads up player, ready to take the extra base when possible, and running full speed out of the box on hits, trying to stretch singles into doubles, and doubles into triples. He also projects as a super utility player like Harrison, although he does walk more often, and Harrison has a bit more power.

From a hustle standpoint, Frazier is very much like Harrison. From a statistical standpoint, he might compare to someone like Brock Holt, who doesn’t have power, but makes up for that by getting on base with his walks, and limiting strikeouts. That doesn’t guarantee that Frazier will see a few 2+ WAR seasons like Holt, but it does put him in good position to be a super utility player in the majors in the long-term.

I’m not sure how long Frazier will be in the majors. This could be a temporary thing, or it could be how the Pirates are moving on from Cole Figueroa, making Frazier the utility infielder going forward. Frazier’s outfield experience could also come into play in the short-term, with Andrew McCutchen and Starling Marte banged up. Long-term, Frazier looks like he could be part of the Pirates plans as a super utility guy off the bench, possibly starting now.