ALTOONA, PA – With hometowns less than an hour’s drive from each other, Edwin Espinal developed a strong friendship with the all too popular Big Sexy. Almost half the age of the 43-year-old New York Mets righty, Bartolo Colon was signed as an international free agent by the Cleveland Indians before Espinal was even born. That doesn’t mean they can’t practice together leading up to Spring Training.

“We live close to each other in the Dominican and practiced together to get ready for Spring Training”, Espinal said.

Although he said that he wouldn’t take many swings off of Colon as they were both preparing for the season as to prevent any chance of injury, Espinal would regularly get in the box to see what the pitcher had and how the pitches came into the zone.

Whatever he did — swinging or not against Colon — the preparation that Espinal put in this past off-season definitely seemed to work, as the 22-year-old has put together his best half of professional baseball. 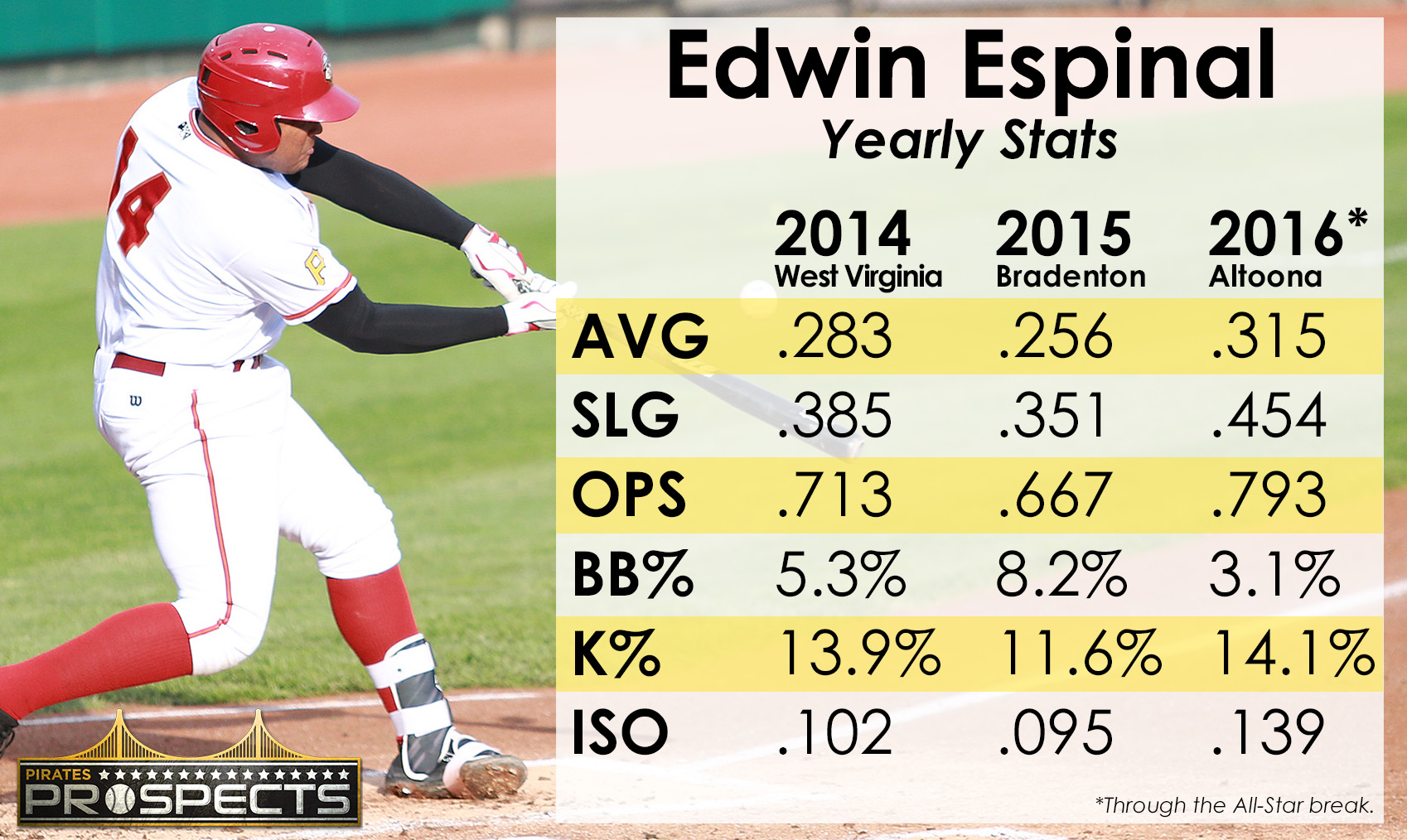 (It seems to be working for Bartolo Colon, as well, with a 3.28 ERA this season for the Mets… not to mention his first major league home run.)

“I worked hard in the Dominican during winter ball,” Espinal said. “That league helped me with hitting because we see a lot of big league type of pitchers there. I took my time there very seriously.”

One retired professional player who spent a few years with Aguilas has meant a lot to Espinal, as well.

“I talk a lot with Manny Ramirez a lot,” Espinal said. “I text him all of the time. Him and Bartolo are my friends, and they give me very good information.”

As for hitting advice from the career .312 hitting major leaguer, Ramirez has been quick to help a friend.

“Early in the season, [Ramirez] told me, ‘I think you are a little too open when your going to hit,'” Espinal said. “He told me to try to hit the ball in the gap like I was when he saw me play in the Dominican.”

Ramirez also gave advice to Espinal to continue to stay short in his swing and hit the ball to the opposite field.

“He told me, ‘you are very good hitting to right field, so stay short and try hitting to the gap,'” Espinal said. “‘When you want to take a big swing, try hitting to straight away middle.'”

It took Espinal a bit to get rolling this season in Altoona, probably some due to the cold weather, but he did make some mid-season changes that really helped him start hitting well. Through his first 40 at-bats, he was only hitting .225 with a .537 OPS. Since then and once May rolled around, Espinal has been batting .335 with a .851 OPS.

Espinal worked with Altoona’s Hitting Coach Kevin Riggs to drop his hands and elbow some in his pre-swing to help him be shorter to the ball. As well as the hands and elbow, he also began staying a little lower in his stance to help speed up his swing even more.

“I’ve been working hard here in the cage,” Espinal said. “I got in a conversation with [Kevin Riggs] and told him to let me know if he sees something that can help me. Getting my hands a little more down helped for me. I can be a more short to the ball, and I feel more comfortable at home plate.”

The changes have helped all around, with his strikeout rate dropping back under 12% since April 26th. He has also had 12 extra base hits since June 1st compared to only six extra base hits in the first two months of the season.

Success has led to more playing time for Espinal, and with Jose Osuna’s recent promotion to Triple-A Indianapolis, he has found everyday time at first base after splitting between first and third early in the year.

Ultimately, Espinal credits his roots in the Dominican for his success.

“That’s where I learned,” Espinal said about his recent stints in the Dominican Winter League, as well as growing up there. “Every time I’ve played there, I’ve tried to have fun. I like to play with a lot of energy. When you see me in the field and I’m not moving, it means I’m not ready to play. I like to play with high energy.”

I guess getting some regular advice from major leaguers is good, too.