PITTSBURGH — Andrew McCutchen drew a walk against the Milwaukee Brewers Thursday night. He has just 35 unintentional walks on the season through 96 games. He’s on pace to draw just 59 compared to 98 in 2015. His walk rate of 8.6 percent is the lowest of his career.

Of course that isn’t the only hitting-related career low McCutchen has recorded in 2016. He’s also striking out and a much higher rate — 24.7 percent of the time, compared to his 17.9 percent career average.

Because both walks and strikeouts involve plate discipline to a certain degree, I asked around to see if the Pirates thought the two issues are related.

“They can come from one symptom and it can also come from a couple different things,” manager Clint Hurdle said. “Are you trying to hit the ball too hard, are you committing to one pitch early, are you guessing? There’s a number of ways to look at it and a number of questions to be asked.”

McCutchen acknowledged the number, but pointed to the complexity of the situation, saying that there are “so many different things that go along with it that you can’t just look at strikeouts and walks.” There are a range of outcomes that can happen on any given at-bat, only some of which is inside the hitter’s control. Sometimes a walk can be a positive result. Sometimes, a batter may have missed a chance to get an extra-base hit, but takes a walk as consolation.

Is that latter case a good result or a poor one? That’s not any easy question to answer, but hitting coach Jeff Branson said it depends on the situation of the batter.

“Sometimes, when you’re pressing at the plate, you’re trying to get out of a rut,” he said. “You tell guys to be more patient, but you don’t want him to be patient to the point where he’s getting more walks and not doing damage. The only way you do damage is by swinging the bat. The way you get your swing back and the way you get out of ruts is by swinging.”

So with a player like McCutchen, who clearly has the talent and ability to be a dangerous hitter, walking more doesn’t seem like it’s always a positive outcome, especially given the sub par results thus far. 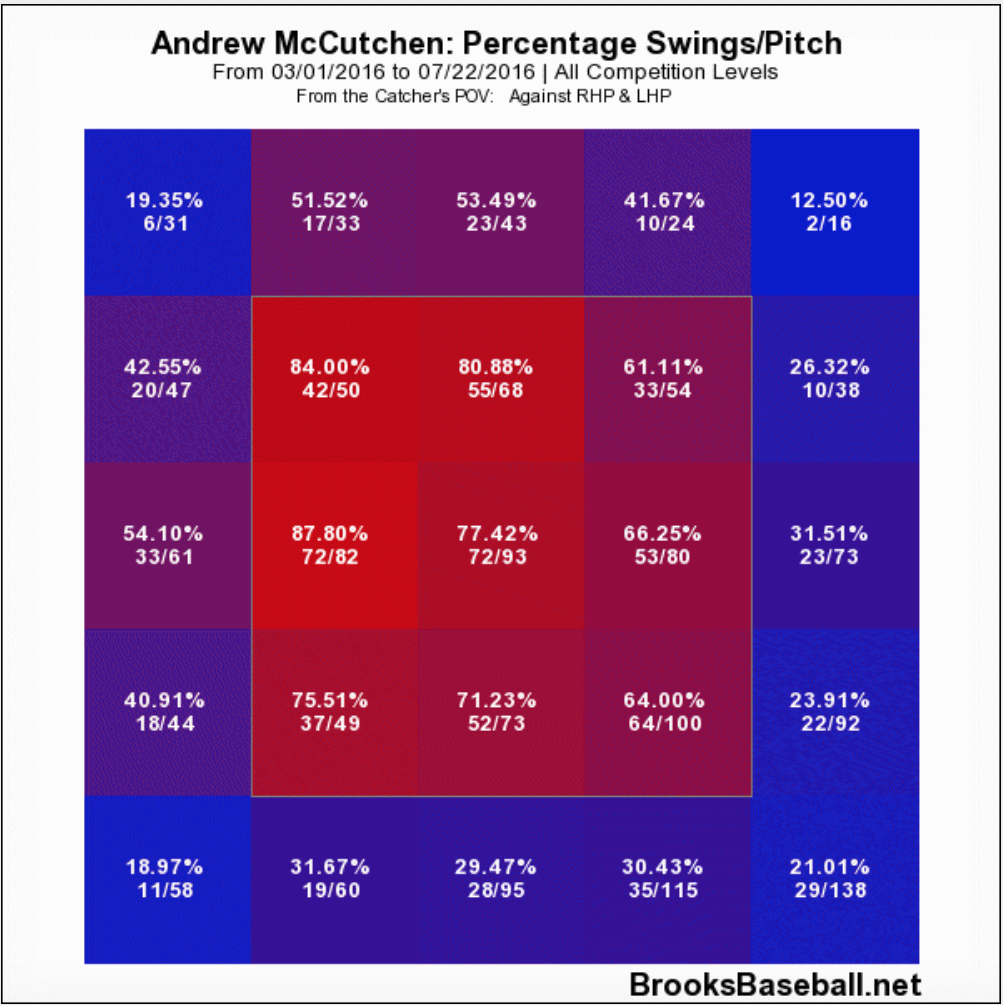 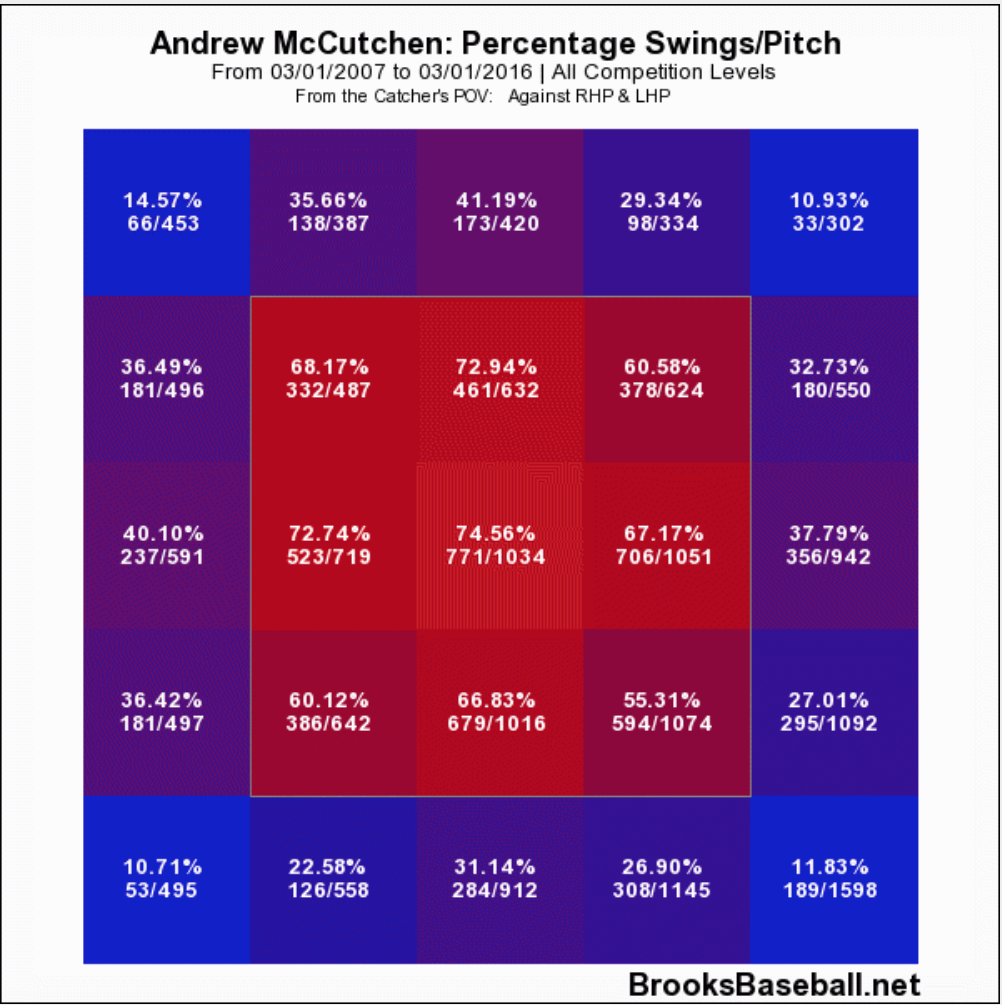 But the biggest, most startling difference is the amount of times he’s missing on pitches that are in the zone, particularly at the top. Branson acknowledged that opposing pitchers have changed their approach against McCutchen this season.

“There is some difference,” he said. “Their scouting report is to pitch him a certain way: the pitches he’s not getting to. That’s why they have advanced scouts. They go in the series before and say, ‘OK, this is the way we’re going to pitch him.’” 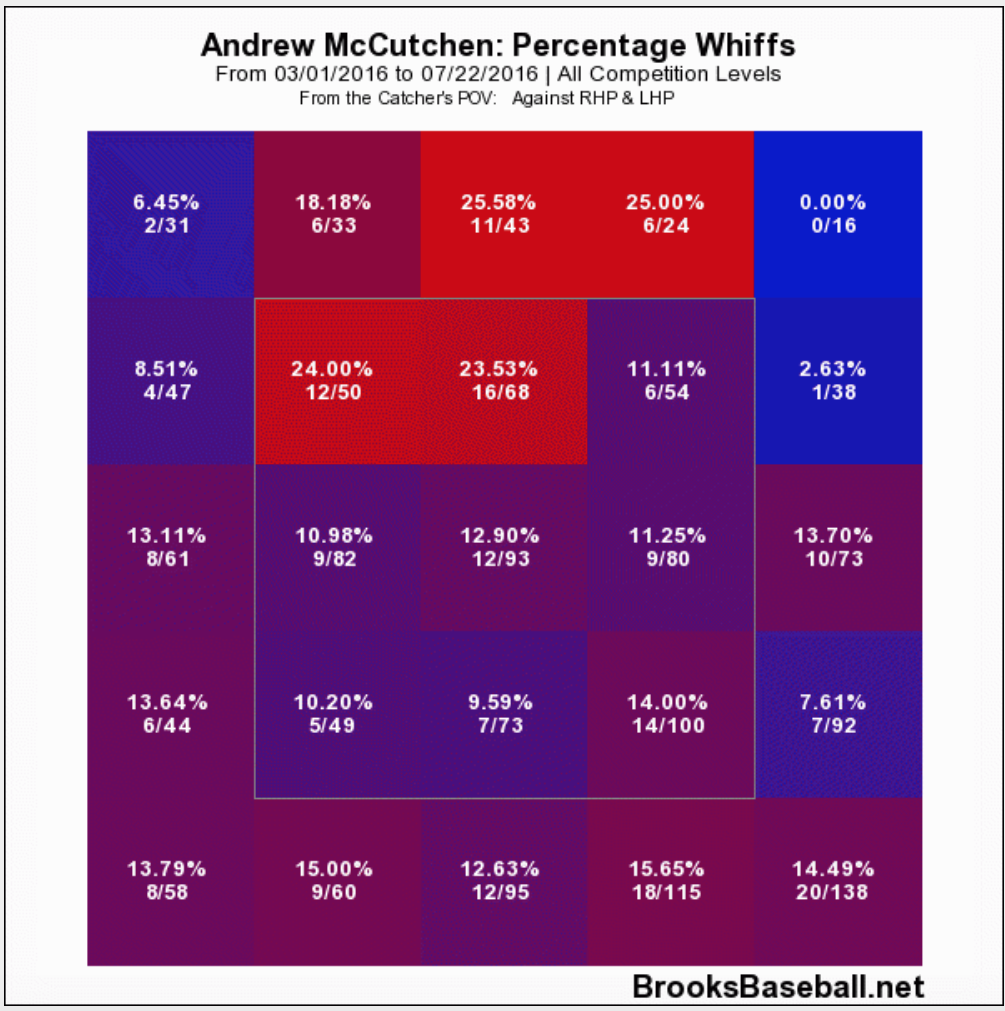 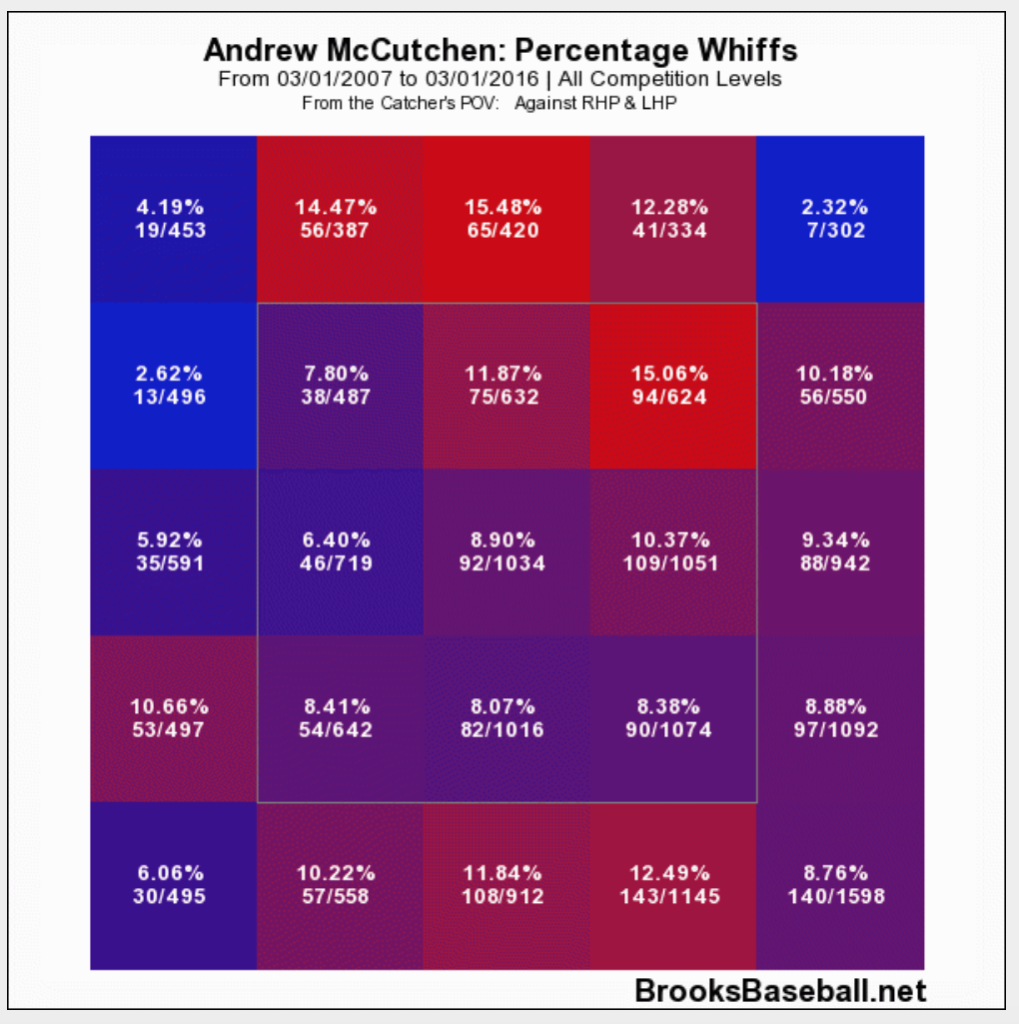 But Branson was quick to point out that those back-and-forth adjustments take place throughout every hitter’s career.

“He has to be able to make the adjustment of what they’re doing to him,” he said. “That’s every hitter. That’s not only him. We as hitters talk about not falling into their game plan and sticking to our strength, but if they have the ability to get us off our game plan, we have to do something to counteract their game.”

So the reason for McCutchen’s inability to make that adjustment this season?

“It’s timing,” Branson said. “He just hasn’t settled in. In my mind, the All-Star break was great for everyone except for him. The series he had against the Cubs, everything was rolling, everything was perfect. The four days off came at a bad time for his swing. Now we’re trying to rebuild and get back to where he was. … Hitting is tough to repeat day in and day out. Every day it’s a simplified game plan, simplified thoughts, to get not only him, but every other hitter, not to over think things. Sell out to one pitch, one spot. That’s what we’re talking about.”

Hurdle also said that when a player is struggling, they will divide the plate into areas, giving a player the best chance to make contact. If McCutchen isn’t hitting those high strikes, maybe it’s beneficial for him to take them even if they’re in the zone and wait for a pitch in one of his higher-percentage areas.

“The analogy I use is that everybody has a lock on them,” Hurdle said. “You have to keep trying different keys. If you only have one answer or one key to try to help them, man, you might help one guy, but there’s going to be a bunch of guys that you miss.”