Giles: Chad Kuhl Seeing Better Results Now That He’s Getting the Ball Down

PITTSBURGH – When he left the mound at PNC Park on July 9th, an evening which is remembered for more dramatic reasons, Chad Kuhl had pitched only 2.1 innings in his third career major league start. He ended up allowing four earned runs on seven hits and a walk, with only one strikeout, pushing his career FIP at the time to 5.02 (6.09 xFIP), with a highly concerning 31.9% ground ball rate and a poor 1.60 walk-to-strikeout ratio.

After that game and before his next start, Kuhl and manager Clint Hurdle had what Hurdle referred to as a “very black and white” conversation about the starter’s performance so far, particularly as it related to his difficulty keeping his pitches down and generating ground balls.

Hurdle recapped that meeting in simple terms before last night’s game: “[Kuhl] said ‘I gotta throw it lower,’ and he apparently came prepared with slightly more detailed suggestions at that meeting: ‘I need to nail my release point; I need to get on top of the ball; I need to sink the ball. End of story.’”

This may be one of those rare situations in baseball when all parties see the situation the same way. As you may remember, I took a look at Kuhl’s pitch elevation issues, noting that when he was able to keep the ball down, generally speaking, things went better.

In that previous article, I covered some of the adjustments to his delivery that Kuhl intended to make, and last night he was asked about what has helped him meet that goal of “throwing it lower” over his last four starts.

“For me, it’s just staying back a tad longer, being able to get on top of the ball as opposed to getting around the ball,” Kuhl said after last night’s game. “That creates, instead of a [lateral or horizontal] run, more of a downhill plane, and gets guys [to hit the ball] on the ground.”

“Throwing it lower” can mean finishing the ball down in the zone, or attempting to generate the right amount of downward—as opposed to lateral—movement on each pitch.

“I think it’s both,” said Kuhl when asked what he intends to do. “When you’re good, when you’re back [in your delivery], you’re coming down with the arm and it’s coming down at a better angle and it has more sink to it.”

In Hurdle’s eyes, the primary cause of Kuhl’s problem with elevating his pitches was increased adrenaline following his promotion. Hurdle believes this to be an issue most young pitchers face, “especially if it’s a ‘touch and feel’ guy with a command pitch like a sinker that’s got some bottom to it and some spin.”

“You get over-amped, and you throw right through the sink,” Hurdle added. “That’s really what happened to him, I believe, [in] the first three starts.”

Often times we try to point to unseen psychological phenomena as easy explanations for performance, but in this case Kuhl seemed to agree with his manager’s assessment.

“It comes back to what Ray [Searage] preaches about not trying to make anything nastier,” Kuhl said. “What got you here is good.”

Kuhl’s lack of subtlety in his assessment of his early performances has carried over to his discussions with the media, and I thought he gave an uncommonly honest comment about his transition to the major leagues:

“I was incredibly nervous. You never want to admit it, but I was nervous coming out those first times. Seeing a bunch of fans, it’s a ton different than the minor leagues where you have a couple hundred people out there. You really have to simplify it and make it just another game the best the game.”

Taking the Next Steps

Whether he truly found that simplicity or not, Kuhl came out firing in his next start on July 17th, allowing only one hit and striking out five on his way to six shutout innings against the Nationals. He’s surrendered no more than two earned runs and posted a game score of at least 50 in each start since that game, including last night.

Keeping the ball down in the zone does seem to be happening more regularly for Kuhl, as the two charts below should demonstrate. First, consider his first three starts: 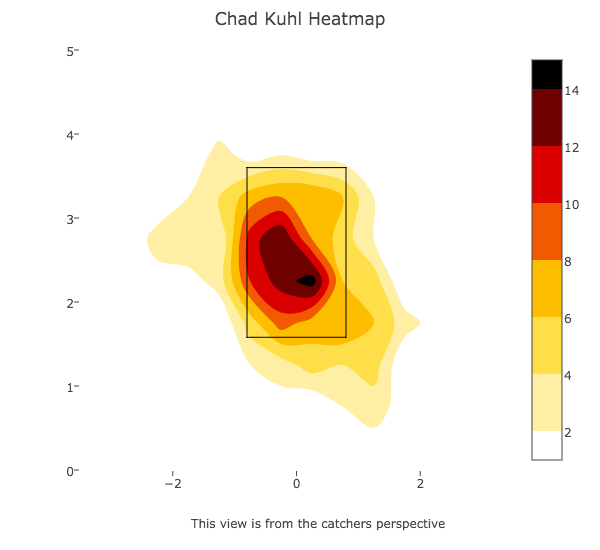 Now, consider his improved efforts to keep the ball down in his last four starts: 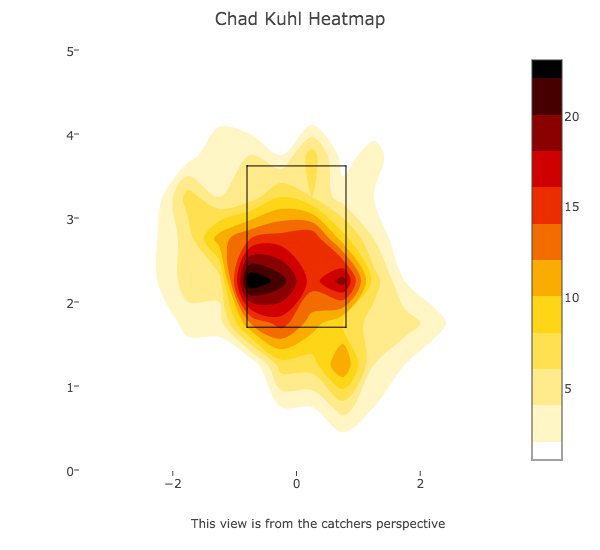 As you can see from the plots above, the location of Kuhl’s pitches—most importantly his sinker—has improved quite a bit since his conversation with Hurdle. What you see on that map is his overall preference of working down and away to both right-handed and left-handed batters, hence the clusters at those parts of the strike zone.

What’s more, his outcomes on those pitches have improved as well:

Kuhl has a combined 4.16 FIP and a 4.93 xFIP through his first seven starts, with their divergence due in large part to his relatively high fly ball rate (41.0%) but below-average home run rate (8.3%). It’s certainly not unusual to see that kind of separation in a sample of seven starts, and you would expect the two to come into greater alignment — for better or worse — as ground balls continue to occupy a greater portion of his contact profile.

So the signs over the last four starts are mostly good, and it’s difficult to argue with his results, but Kuhl has a smaller margin for error than his contemporaries such as Jameson Taillon and Tyler Glasnow, who both have better true “stuff.”

As we know, the location and quality of movement of his pitches are of primary concern to Kuhl since he has not demonstrated the ability to generate impressive amounts of strikeouts. His 14.5% strikeout rate with the Pirates is noticeably below his minor league track record, and it lags significantly behind the league average for starting pitchers (20.1%).

At present, only three qualified pitchers in either league have a strikeout rate lower than Kuhl’s: Kendall Graveman (14.1%), Martin Perez (11.8%), and Jered Weaver (11.5%). James Shields (14.7%) is close as well. All of those starters have a FIP above the league average.

Having failed to record a strikeout last night, I asked Kuhl whether seeking swings-and-misses when he gets two strikes was part of his approach.

This is consistent with what we know about Kuhl’s minor league track record and his development as a starter. It’s worth noting that his whiff rate (7.7%) is not terribly far from the league average for starting pitchers (9.4%). His slider is particularly useful for getting those swings-and-misses, with a 16.7% whiff rate so far this season.

Generating ground balls with a heavy sinker and using a breaking pitch to generate swinging strikes is not a fool-proof approach, and it does allow less room for error. It is a strategy that can work, when the pitcher is executing down in the zone, and has the support of a capable defense behind him. To his credit, Kuhl seems to be handling his part of that equation with much better consistency.

Two characteristics that do augur well for Kuhl are his athleticism and competitiveness on the mound.

“I like the demeanor; I like the preparation; I like the competitive edge,” said Hurdle when asked yesterday about Kuhl’s intensity. It’s something that he has mentioned either before or after several of Kuhl’s starts.

We saw both on display in his first start, when Kuhl tagged out the Dodgers’ Justin Turner at the plate to end the inning and prevent the tying run from scoring. Kuhl showed strong emotion while heading to the dugout after what would be the final out of his first start.

That intensity came out again last night, when Kuhl snared a 100 MPH ground ball by Christian Yelich to start a 1-6-3 double play and end the third inning.

Hurdle noted after the game yesterday that the Pirates’ noticed Kuhl’s solid hand-eye coordination and athleticism during fielding drills at Spring Training, and it was clear that the display of emotion after completing that play was something that his manager appreciated.

These sorts of observations about a player’s makeup can seem cliché, especially when we hear them so often, but in a case like Kuhl’s where competitiveness and intensity might help make the difference between becoming a consistent starting pitcher or a ground-ball relief specialist, it at least warrants mentioning.

Obviously, the critical aspects of Kuhl’s performance are what happens between the mound and the plate. We’ve seen encouraging signs for him after a rough start, and it’s clear that he will continue to get opportunities down the stretch as the Pirates fight for a playoff spot.