MORGANTOWN, WV – I got my first look at eighth round pick Dylan Prohoroff last week while I was in Morgantown, looking forward to seeing a hard throwing reliever with control problems. After just one pitch, I saw the source of the control problems. I also suddenly had neck pain from watching Prohoroff pitch.

Prohoroff has a pretty violent delivery, and the right-hander’s neck whips forward and tucks down into his left armpit after almost every throw. Sometimes he’s not even looking at the plate when he’s releasing the ball, and you can see how that would be an issue when it comes to control. Here is a GIF of the delivery, on one of the better pitches where he kept his eye on the plate, getting some good downward movement and a swinging strikeout on his slider. 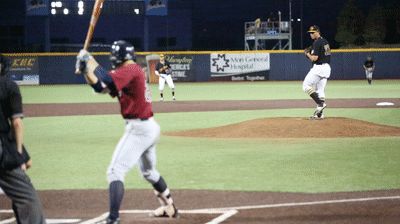 Prohoroff is not the first case I’ve seen of this. He’s definitely the most extreme case I’ve seen. And that was also true of Black Bears Manager Wyatt Toregas when I asked him about the head movement.

“We call it head whacking,” Toregas said. “He’s one of the biggest head whackers I’ve ever seen. That’s why he throws so hard. If we can figure out a way to keep his eyes on sight, if he can get to a point where he can keep his eyes where the ball needs to go, his hand-to-eye will be better. That’s something that we’ve got to work on, and at the same time figure out how to keep the velocity.”

Prohoroff said that it’s something he’s always done, but also something he needs to watch from a control standpoint.

“For the most part, I’ve always been a tuck and head movement kind of guy,” Prohoroff said. “It’s something to look into. Because of definitely just repeating my consistent delivery. … That brings sometimes some flying parts that shouldn’t be flying open, or staying closed.”

As you could expect after reading my article this week on how the Pirates don’t make changes until instructs, they won’t be making any adjustments with Prohoroff anytime soon.

“We’re not going to mess with that right now, but it’s definitely something in instructs that we’re going to start talking about, and moving into the off-season, looking at coming into Spring Training with improvement in that area,” Toregas said. “It’s not something you want to mess with right now while they’re playing games.”

The report on Prohoroff was that he had control issues, but had good velocity to go with that. Those reports had him sitting low-90s and touching as high as 97. The latter part was a bit exaggerated, as Prohoroff explained that he literally only hit 97 one time.

When I saw him last week, he was sitting 91-92 MPH with the fastball, although I don’t put much stock into the velocity this late in the year, or in just one outing.

One interesting thing I noticed was that the reports about him having a good slider were true, although the pitch could improve. And that makes sense, because he hasn’t used the pitch often. Right now, he’s mainly working on using the slider more often, making it a better quality pitch, and aiming to get it sharper and firmer. The pitch was 83-84 when I saw him, which was up from the 78-81 range it has been in the past.

“I’d say it’s pretty new, to be honest,” Prohoroff said of the slider. “I pitched last year at Cal State Fullerton, and it wasn’t my go-to pitch. It’s definitely something I’m working on, because I know when I move up, or just to be successful here, or anywhere, you need off-speed and command of it.”

Prohoroff mostly had one pitch in college — the fastball. He moved it around in the zone, locating it high, low, in, and out, doing a good job of changing the eye level. That kind of command of the fastball would pair well with his slider, especially if he learns to control his pitches better.

But Prohoroff isn’t stopping there. I asked him about his plans for the off-season, and they mostly revolved around the third pitch, while also focusing on the control.

“Definitely working on the changeup, and getting more directional towards home plate,” Prohoroff said. “Sometimes I’ll be going more towards the third base line, instead of towards the plate. That’s the same thing with my foot. It all comes from the back foot, my drive leg. Sometimes it will rotate, and it throws off the whole delivery.”

Prohoroff was a closer this year at Fullerton, but the Pirates typically have relievers working out of the rotation in the lower levels, opting to have their best arms getting maximum innings. He has been working strictly as a reliever, going 1-2 innings at a time.

In the past, they’ve moved guys back to the bullpen quickly. Last year they used eighth rounder Seth McGarry as a starter, but moved him to the bullpen this year because it was what he was more comfortable with (and he’s in the same 1-2 inning per outing role as Prohoroff right now). It remains to be seen whether Prohoroff would get time in a future rotation, especially after working to add a changeup as a third pitch.

He is a very interesting arm to follow, and a potential relief pitching prospect to watch if he can get his control down. If that happens, then he has a fastball that he’s comfortable with as his primary pitch, along with a slider that looks like it could be an out pitch. But until the control comes along, you might want a neck brace when watching Prohoroff pitch.