The Pittsburgh Pirates released their 2017 schedule on Wednesday. They will begin the season April 3rd on the road in Boston at historic Fenway Park. The home opener will be four days later against the Atlanta Braves.

This will be just the second time the Pirates visit Fenway Park. They played a three-game series against the Red Sox back in 2005.

Interleague games next year include the New York Yankees visiting the Pirates for three games from April 21-23. That will be the Yankees second trip to PNC Park, first playing there in 2008. The Tampa Bay Rays, Detroit Tigers and Baltimore Orioles also visit PNC Park, while the Pirates go on the road against the Orioles, Tigers and Toronto Blue Jays.

The schedule wraps up on October 1st, the last game of a four-game series in Washington. 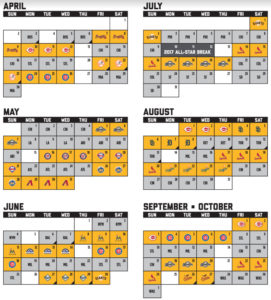