BRADENTON, Fla. – Wednesday afternoon at LECOM Park wasn’t just another day of Spring Training for the Pirates, as the World Baseball Classic team from the Dominican Republic visited Bradenton for an exhibition game. Not only did the DR bring a loaded roster that looked like a Major League Baseball All-Star team, they brought two of the Pirates’ own back to town, with Starling Marte and Gregory Polanco getting the assignment in center field and right field, respectively.

The matchup came at a perfect time in the Pirates’ Spring Training rotation, as Gerrit Cole and Tyler Glasnow were challenged early in camp against such a good lineup. For Cole, the challenge was met. Unfortunately for Glasnow, some hiccups occurred.

Cole gave up two hits in three innings pitched, with the only hit of significance coming against fellow Pirate Gregory Polanco, a long line drive double to the centerfield wall.

“You leave it over the middle to Greg, he’s going to hit it,” Cole said after the game about Polanco’s hit. “Otherwise, any time you don’t give up hard contact, it’s a good day.”

Cole seemed to come out of the gate strong, showing some good velocity early. He didn’t strike out any batters, but he didn’t walk any either. He only threw one slider — a pitch that Robinson Cano pulled hard foul in the first inning — but he was able to use the rest of his arsenal well.

“I felt strong,” Cole said. “I’m trying to keep getting as many reps as possible with the fastball to try to build up strength. I thought the changeup had good action today, as well as the curveball. I hit both sides of the plate well and changed height well, so it was good.”

Cole added that he feels he is right on track with where he should be in Spring Training. Clint Hurdle also felt that today was a great test for his ace pitcher.

“That’s as good of a lineup that Gerrit will face all year,” Hurdle said. “It was a good stretch for him to face that many good hitters in three innings. It was fun to watch it.”

As for Glasnow, he looked strong through his first two innings, but his third inning of work — the sixth — kind of got away from him. He walked four batters in the inning and ended up with six runs tagged to his name, five of which came in that sixth.

Glasnow said that he felt like he started getting out of competition mode in the inning, not able to recover when things turned south.

“Towards the end I beat myself for sure,” Glasnow said. “Towards the end, their approach was pretty much to not swing, and it worked pretty well for them. Things started going a little bad, and I began to think why it was. Towards the end, I kept saying that I have to get out of this mode, and I was throwing better again, but my pitch count got up.”

Following the outing, Glasnow took the approach that he needed to shrug it off, just take it for what it was, and learn from his mistakes.

“That’s the attitude you have to have during Spring Training,” Glasnow said. “My first outing was really good, but it’s still early, and everyone is still rusty. Forget about the bad ones, and forget about the good ones. I look forward to going back out there and showing what I can do.”

His competition level was definitely high in those first two innings, as he went 1-2-3 against Manny Machado, Jose Bautista, and Nelson Cruz. In the fifth, Marte and Polanco both poked singles through the infield, but Glasnow still looked in complete control of the game.

All five of the hits against him were ground balls, which is a good sign that he was able to keep his stuff down in the zone. He noted that his changeup induced a few grounders, and that was encouraging to him.

“That third inning was complicated,” Hurdle said. “You’re out there putting guys on base without them swinging the bat, it’s going to complicate things. These are things he needs to work on. He’ll have every opportunity to continue to go out there and battle.”

Obviously the walks were a concern in that sixth inning, but otherwise, Glasnow said it was overall a good experience facing that Dominican lineup.

“It was cool seeing a lineup like that,” he said. “The whole team was really good. I’ve faced [Marte and Polanco] in live bullpens, but honestly, it was kind of an honor to throw to that whole lineup.”

Marte and Polanco Get On Base a Combined Seven Times

Gregory Polanco definitely has bragging rights against his Major League team, as he went 3-for-3 with a double and two walks this afternoon. Starling Marte wasn’t far behind, as he went 2-for-3 with two RBIs. As two-thirds of the Pirates’ starting outfield, Clint Hurdle wasn’t surprised by what he saw.

“I’ve watched them get on base before, so today it was just with a different seat,” Hurdle said.

But coming back to LECOM Park wasn’t just about getting on base for the two young countrymen, it was a way to represent the Dominican Republic in a very personal way.

“We are ready to give 100% to our country, the DR,” Starling Marte said before the game.

“We are pretty confident,” Polanco added. “We are going to do our best to represent our country today.”

When asked if it was a little strange to go into the visiting team’s clubhouse today, Polanco said that it did “feel kind of weird”, but he added that “we know this is our field”. Marte added that it was great to be able to see his Pirate teammates today.

One thing that the Dominican team does really well – other than play baseball – is bring a ton of energy to wherever they are playing. Drums, shakers, singing, dancing, chants… it’s all a part of the game for Team DR. 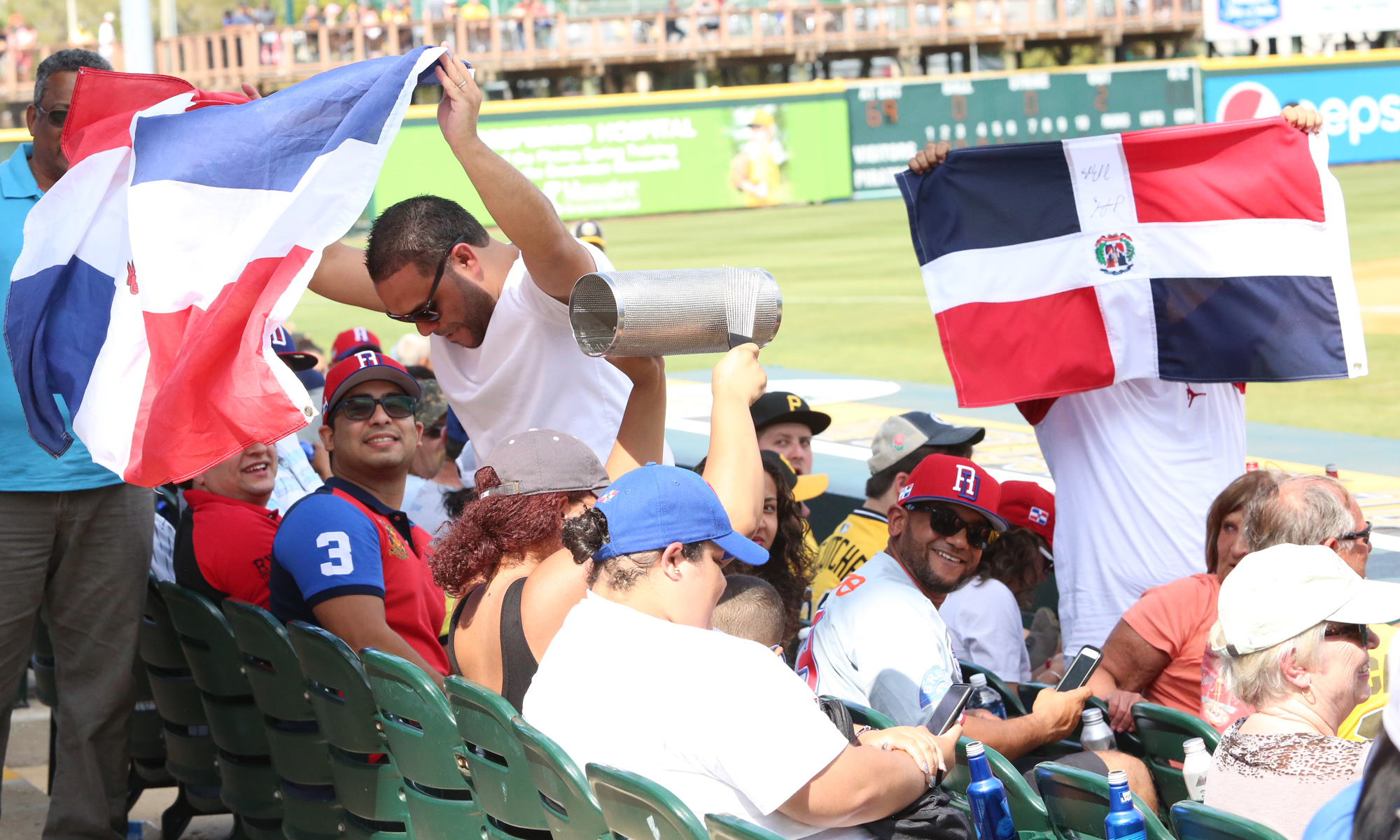 Gerrit Cole said that the atmosphere is always cool when facing a team from Latin America, as he got to experience some different baseball cultures while playing for Team USA while in college.

“When you play overseas, a ton of the different venues are unique like in Taiwan or Japan,” Cole said. “When a Latin America team shows up like Cuba or the Dominican, they always bring a band with them. It’s kind of a cool atmosphere, and it’s not something we are used to, so it’s pretty special.”

Tony Peña, manager for the Dominican team, said that it’s a culture, and if you have never been to the DR, you wouldn’t understand what it’s about.

“We play with heart and enjoy the game,” Peña said before the afternoon game. “Everybody’s happy. We don’t want to disrespect anybody; we just want to be who we are. We are happy people, and we want to continue to be like that. Everyone sings. Everyone dances. We care. We love the game so much that we go hard and give it everything we have.”

DuRapau and Lopez threw one unblemished frame each. Cody Dickson only allowed one hit in 1.1 IP. Eppler went 2.2 IP and allowed one run, while Lakind was tagged for two runs on three hits in one inning of work.

Cody Dickson told me after the game that it was definitely a great experience being able to pitch in front of practically an MLB All-Star team defense. I also asked if they got to keep the uniforms, and unfortunately, they do not. However, they do keep to keep the hats as keepsakes.

Todd Tomczyk met with the media pre-game and game updates on all players who were or are injured.