Tanner Anderson Making a Successful Transition to the Starting Rotation

ALTOONA, Pa. – Looking at the Pirates’ 2015 draft, it’s easy to see the potential among some of the top picks – Kevin Newman, Ke’Bryan Hayes, Kevin Kramer, Brandon Waddell, etc. Once you scroll down the page a little further, there are a few names that have already found themselves in Altoona to begin the 2017 campaign, including relievers Tate Scioneaux (39th round, 1177th overall) and Sean Keselica (33rd round, 997th overall).

The Pirates have not been afraid to be aggressive with these college pitchers, pushing them to Double-A in approximately one and a half years of professional pitching. Among those being pushed is Tanner Anderson, who was drafted in the 20th round out of Harvard and is now throwing out of the Altoona starting rotation.

Before last fall, Anderson had only made three total starts in his short professional career, two in Bradenton and one in West Virginia earlier in the season. The Pirates were using him in a long relief role, similar to what Scioneaux and Keselica are still doing out of the Altoona bullpen. Before the end of his 2016 campaign in Bradenton, the Pirates approached him about pitching in the Arizona Fall League in a starter’s role. That’s when he realized the organization may have had some different plans for him.

“They were like ‘hey, we want you throw and start in the AFL,'” Anderson said. “At that point, I kind of got the hint that I would be starting next season.”

The Pirates liked his ability to attack fastball first — mostly two-seamer — and get ground ball outs. And, the numbers back up those efforts, as Anderson has one of the better ground ball rates in the organization over last two years. 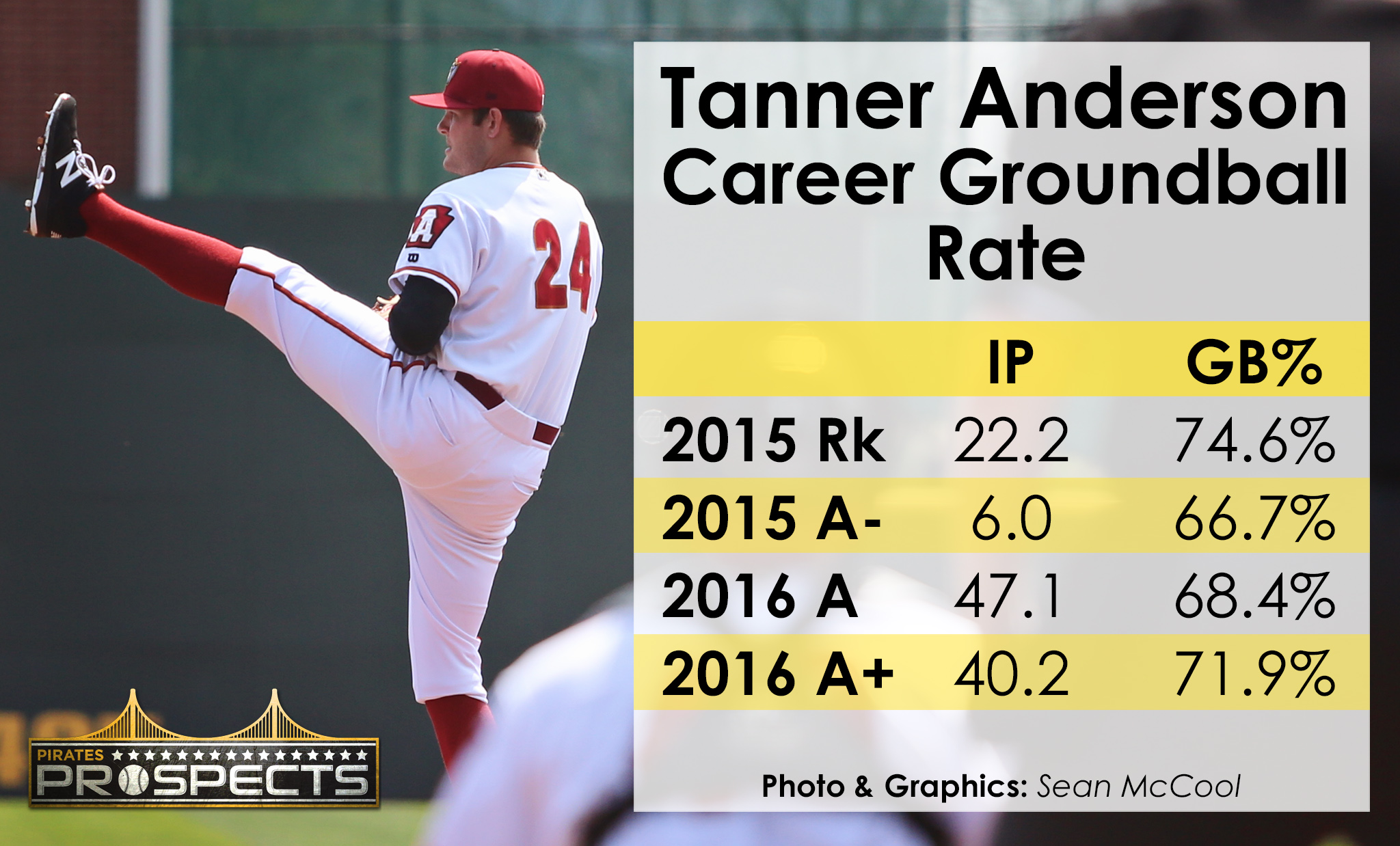 Anderson pitched for the Surprise Saquaros in the AFL and continued to do the same thing as a starter by getting ground balls. As I watched his start last weekend — where he went 5.2 scoreless innings in Altoona — again, ground balls.

“He’s a ground ball machine,” Manager Michael Ryan said. “Maybe the hitter’s eyes look at the leg kick a little late with their contact point. Our defenders are always ready when he’s on the mound because they know there will be a lot of action. He gets it on the ground.”

The Pirates’ organizational philosophy is to attack with the fastball, and that works extremely well with guys who throw two-seamers looking to induce groundouts. For starting pitchers, they begin to intertwine more secondary pitches the second time through the opposition’s lineup. That’s where Anderson’s new changeup comes into play.

“It’s a pitch I’ve been working on since I went to the AFL last fall,” Anderson said of his changeup. “That’s when I really started mixing it in, because that was my first time actually starting. It’s come a solid way for only throwing it for really a month and a half or so (between the AFL and Spring Training).”

Altoona Pitching Coach Bryan Hickerson says that the goal isn’t to make Anderson a good Double-A pitcher; rather, they want to give him the ability to pitch in the big leagues.

“He’s obviously not throwing 99 or 98 with the sinker,” Hickerson said, “so if he has a secondary pitch that he can throw for strikes, and that will also play well with the sinker that he already has, it will be another weapon for him at the next level.”

Also mixing in a slider to complement his sinker (moving the other direction), Anderson now has the secondary pitches to make the necessary changes for a second — or third — time through a batting order. He still has been sitting heavy with the two-seamer, but the other two pitches have come into play in his limited innings so far this season. Hickerson believes Anderson has the makeup of a starter, and they want to utilize that ability.

“It’s a reflection of the potential and stuff that he has to go through a lineup more than once and get those reps in,” Hickerson said. “We saw it the other night when he went out there and pitched with basically just his fastball. That was it. He threw a few good changeups, and we’ve been working on that, but we still have to get that slider going for him.

“The fact that his fastball had so much sink, and we saw that in a hitter’s count — 1-0, 2-0, 3-1 — taking hacks at his fastball and not making good contact. We’re looking at that, seeing that this guy has tremendous potential, and we’re trying to tap into it to get him to the next level.”

So far, so good this season for the quick working, efficient right-hander (seriously… this guy works fast on the mound and his defenders love it). As for what to expect from him moving forward, he is still kind of a wild card based on the move to the rotation and additional pitch. He definitely has the ability to get ground balls, and if he can continue at the pace he has been pitching at, he could definitely exceed his initial assessment and potential.