The Pittsburgh Pirates have signed 18-year-old right-handed pitcher Haicheng Gong as an international free agent. He pitched for China during the 2017 World Baseball Classic, allowing one hit, while recording one out. He is the second players to sign out of MLB’s Development Center in China. Gong first attended the center in 2012.

Gong is 6’2″, 165 pounds and turned 18 in December. Last summer, he spent eight weeks at a Baseball Academy held by the Lakewood BlueClaws, Low-A team of the Philadelphia Phillies. The camp was set up to help Chinese players get accustomed to American baseball and culture. In September, he was named the best right-handed pitcher during the U18 Baseball Federation of Asia Championship Tournament, which also included teams from Japan and Korea. Gong pitched six shutout innings against the Philippines in that tournament, striking out eight batters.

Here is video of Gong, who reportedly hits 90 MPH with his fastball, though it is 84-87 MPH in this clip from March. That was up from 81-84 MPH in a tournament from last September:

We have updated our international signing tracker, which now includes 23 players signed since July 2, 2016. The Pirates also sent along a photo of Gong agreeing to his deal. He is shaking hands with Roger Chiang, who is an international scout for the Pirates. For accuracy sake, the Pirates list his name as Hai-Cheng, which is different from everywhere else. 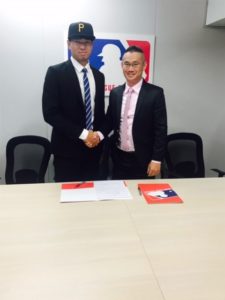