What Went Wrong For Tyler Glasnow After the Third Inning Tonight?

PITTSBURGH — Tyler Glasnow was rolling. Through three innings against the New York Mets on Monday, he gave up just one hit, struck out two and got six ground outs compared to one fly ball.

The next two innings were just the opposite. Glasnow gave up five runs on seven hits over the fourth and fifth innings in what would become a 7-2 loss to the New York Mets on Sunday.

It was a dramatic turn of events for Glasnow, who seemed to be well on his way to one of the best starts for his career. What happened? First, let’s start with what changed.

While Glasnow was cruising in the first three innings, he wasn’t pitching out of the stretch very much. The first hit of the fourth was an infield single by slow-footed Jay Bruce that Jordy Mercer couldn’t glove. The second was a ball hit by Mets pitcher Matt Harvey right back between Glasnow’s legs that didn’t even make it as far as Andrew McCutchen in center field.

Those were well executed pitches with poor outcomes for Glasnow. But after those dribblers that got through, the hard hits came. Asdrubal Cabrera put a two-run double off the top of the wall in center field in the fourth. Curtis Granderson and Bruce both doubled behind Harvey in the fifth.

Glasnow changed his delivery from the stretch this offseason to incorporate a slide step to help with his issues in controlling the running game. That seems to have worked to help with that issue. But is the new slide step causing some other issue with Glasnow’s delivery? Manager Clint Hurdle didn’t think so, saying “I think we’re way past that.”

A quick look at Glasnow’s release points from the game backs that up. There’s not a great deal of variation in where he’s letting his pitches go. 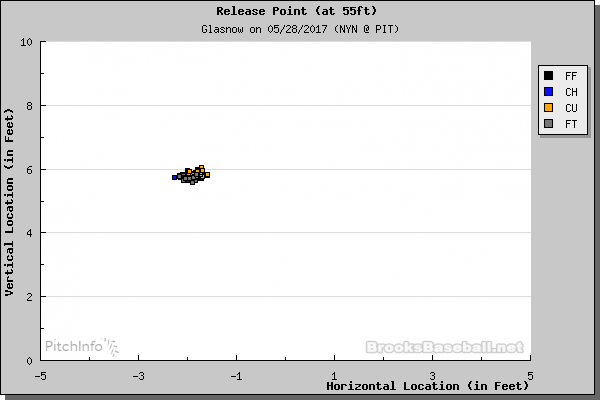 So what then? Glasnow said that he simply lost the feel for his pitches going from the third to the fourth.

“I kinda just lost the feel for things,” he said. “The curveball flattened out. The changeup flattened out. I lost the angle on my fastball. It’s just one of those things. You’ve got to stay strong, stay with the game, compete and do what you can. … I think I was just getting long and losing the angle. It’s kind of been the theme when things have gotten bad for me.”

That checks out, as well. There was a large variation in the amount of movement in all of Glasnow’s pitches over the course of his start, in particular his changeup (in blue below.) The changeup was emblematic of the whole night.

He got Jose Reyes to strike out on one in the dirt in the first and got Travis d’Arnaud to pull one right to David Freese at third base in the second. But he didn’t execute on the pitch that Cabrera sent nearly 400 feet in the fourth.

So what Glasnow is saying checks out — the movement on his pitches just wasn’t there after the third. That’s how it happened, but it still doesn’t really explain why — and that’s a tough pill to swallow for Glasnow.

“It’s good to know that when I have my stuff, it’s hard to hit,” he said. “It’s a little frustrating knowing that from one inning to the next it can turn like that. Definitely going forward, a positive to take away from it, for sure. … I think that was the theme here today. I didn’t have my curveball when I needed and I didn’t have my changeup when I needed it but there was flashes of it all night.”

There’s even better news for Glasnow than a positive takeaway. His manager might be on to the reason for his lack of feel and break late in the start.

“There’s a common thread among pitchers — and it doesn’t have to just be young pitchers, it can be any pitcher — it seems that when traffic picks up on the bases, (they try to throw too hard),” Hurdle said. “Ray continues to talk to them about it. It’s enhancement over execution. It hasn’t been every outing but there’s been outings that it happens. The changeup is not quite as sharp. It’s left up. Cabrera hit one. Curveball, not quite as deep of a tilt. A couple of those got hit. Pitches just stated to elevate on him a little bit and it’s causing the problem.”

Glasnow said that the first three innings could be a blueprint for the way he needs to pitch going forward. He’s had a trying season through 10 starts, but both he and Hurdle feel they’ve continued to see incremental progress.

“We believe so,” Hurdle said. “It’s the old saying. You want guys on the mound with experience. Well, how do they get experience? Opportunities like this and the trial, tribulations and triumphs that come with it. “

“Failure up here is definitely a really good way to learn how to pitch,” Glasnow added. “It’s been really good and it’s also been frustrating, but I’m going to keep my head up and go out and do my best every start.”

Gregory Polanco hit another home run, his third of the season, and went 2 for 4. He’s now hitting .385 since coming off the disabled list. … Adam Frazier went 0 for 4 and is 3 for his last 18 … Andrew McCutchen went 1 for 4, tying Manny Sanguillen for 18th on the Pirates’ all-time hit list with 1,343.