Barnett: Breaking Down the Best Pitches in the Pirates’ Rotation

With All Star break fast approaching, it’s notable that Pirates remain in striking distance for the division despite the suspension to Starling Marte and the absence of Jung Ho Kang. Yet, it hasn’t been largely the result of success by the starting rotation, who have been slightly better than last year but still posted a 4.40 ERA.  In fact, if not for the only members of the rotation to register an ERA below 4.50, Ivan Nova and Jameson Taillon, the number would be much, much worse.

Nevertheless, instead of focusing on the broad numbers of the staff or even individual members, I wanted to look at how the different pitches have fared this season for each member of the rotation, and to do so, I’ll be utilizing the Pitch Value statistics provided by Fangraphs.  They’re technically called Pitch Type Linear Weights, and they are calculated into a cumulative score and a per 100 pitch score (wXX/c).

Since these numbers are determined in a particular nuanced way that involves counts and run expectancy of said counts, we won’t look under the hood too much other than to say that a point value is assigned to a pitch type based on outcome of the pitch (ball, strike, single, etc.) with positive plays for a pitcher accruing positive points and negative plays netting negative points.

There are several context issues and caveats that I need to share before delving into the numbers.  First of all, Pitch Values are purely a measure of how successful a particular pitch type has been for a pitcher this season and will not necessarily be reflective of the talent of the pitch or pitcher.  For instance, Tyler Glasnow has what should be a killer fastball but because of a myriad of issues that pitch value might as well belong to a pitcher of the Jeff Locke caliber at -15.7.

Secondly, while these numbers single out particular pitch types, the art of pitching is much more complicated than isolating a particular pitch as location, sequencing, delivery, and overall repertoire all play a role in the effectiveness of any given pitch, meaning these numbers tell the story of the past but are not an accurate prediction of future performance on their own.

Regardless, these statistics can tell us information such as whether a player should use a pitch type more or less frequently (think of the uptick in Felipe Rivero’s changeup use after it developed) or pinpoint where he is struggling/thriving.

With all of that being said, let me just note that two-seamers and four-seamers are lumped together into the same pitch value for these numbers, but if you want a picture of each of those, you can find that information by navigating a player’s “Pitch Type Splits” on Fangraphs. 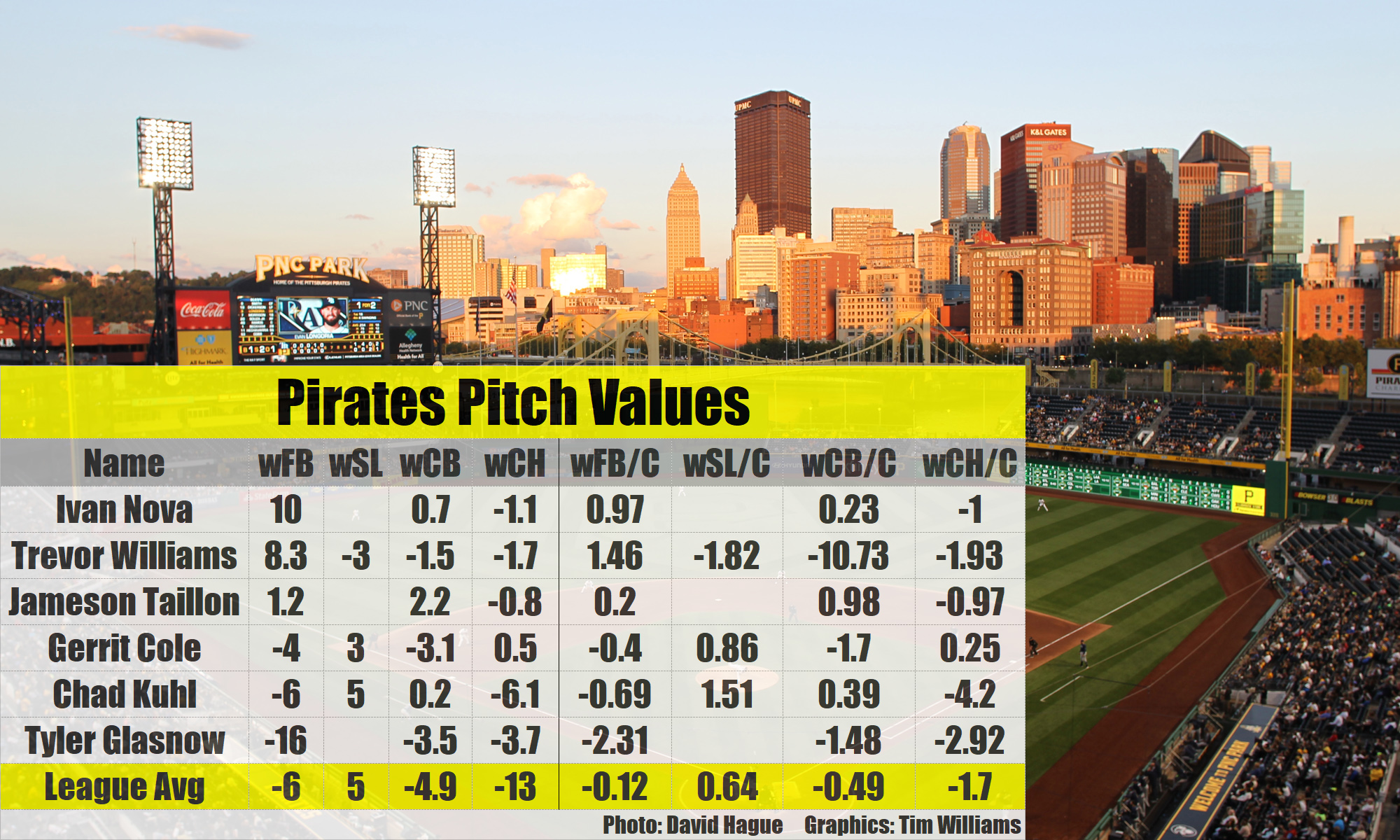 While Taillon has had modest success with his fastball with a 1.2 per/100 average, it is Ivan Nova and Trevor Williams that have thrived with the fastball. In fact, both players rank among the top ten in cumulative pitch value; although, neither is on a per/100 basis, which suggests that both have ultimately made it on the list by pounding the zone with a heavy dose of fastballs.

As a side note, among the league leaders in the cumulative statistic, there are noticeably no upper echelon pitchers on the list, but that could be potentially as simple as that they are elite because they have strong secondary pitches bringing down fastball usage.

Anyways, for Ivan Nova, it’s the mid 90’s sinker that doesn’t draw a lot of whiffs but induces a stellar 57 percent groundball rate that has produced his strong numbers on the season, and for Trevor Williams, it’s an unworldly 70 percent fastball attack, featuring a four-seamer and two-seamer mix that is heavy on the former.

It’s noteworthy that the fastballs struggled in his brief major league stint last season, but they both have benefited from adding 2-3 inches of more horizontal movement. Yet, in somewhat surprising fashion, Williams’ fastballs are the only pitch he has that boasts a positive pitch value, and further scrutiny of his underlying numbers reveal that all of his secondary pitches are outside of the strike zone more than 70 percent of the time. He’s still not walking a ton of batters; though, it will be difficult to sustain effectiveness with that sort of shoddy command or attack.

Nonetheless, perhaps the most concerning facet of the fastball data is that for all the heat on his fastball, Gerrit Cole has been incredibly unsuccessful with it, registering extremely negative values. He’s been throwing the fastball about 8 percent less of the time with all of the drop from the four-seamer, but home run issues have seemingly killed his value because of a 23 percent HR/FB rate. Since he’s never had a negative valued fastball, this aberration warrants considerable attention from Cole and Searage during the All Star Break if Cole is to return to early season form.

Even though Gerrit Cole’s slider hasn’t been as successful as it was during his dominant 2015 season when it sat around 1.1 per/100, it is heads and shoulder better this season than last when a decrease in movement drove it’s value into the negatives. Cole didn’t reverse the situation by restoring movement, but he has obviously grown more accustomed to attacking with a more subtle, late-breaking slider.

Yet, Cole’s patented slider hasn’t been the most effective on the team as Chad Kuhl’s has been remarkably superior, and it’s not just because he’s tossing it much more frequently that Cole.  On the contrary, as I examined the data for Kuhl’s slider, I noticed something peculiar in his movement and velocity, so I thought I’d juxtapose their movement graphs.

They don’t just look to have similar movement; the average movement numbers are almost identical.  And the crazier aspect of their sliders is that they also have the same minimum, maximum and average velocities.

While I haven’t come across any commentary, it is intriguing to learn that neither pitcher had this type of movement on their slider last season, leaving you to wonder what the source of the change is.  Additionally, it may cause you to question why Kuhl’s slider is more valuable than Cole’s when the latter has a superior arsenal.

Although I don’t have a perfect answer at the moment because it’d potentially require broad exploration, I can tell you that Kuhl is getting significantly more chases outside of the zone and drawing 7 percent more whiffs on the pitch than his teammate.

Curveball is clearly a weakness this season for the Pittsburgh pitching staff, which is peculiar since Glasnow should have a much better number, albeit nothing worked together for him this season in the majors.

Regardless, the curve has been an inconsistent pitch for Cole over the years, so with the slider excelling, it might be time for Cole to up his slider usage at the cost of the curveball try to work out the kinks this offseason rather than chucking it to no avail.  Since he was able to figure out how to use the slider effectively after it lost horizontal movement, it’s not impossible that Cole could do the same with the curveball.  Although, hitters are whiffing over 9 percent less of the time against the pitch and making contact a ridiculous 40 percent more of the time when it is in the zone.

You might wonder why I’m suggesting Cole cut down on curveball usage when Trevor Williams’ number looks the way it does, but he actually only tossed the pitch about 1.5 percent of the time, which means the same sample size is too low to draw many conclusions.

Meanwhile, Taillon has fared well in a per pitch basis with his curveball, but his unfortunate absence keeps it from reflecting fully in his cumulative numbers.  Additionally, Nova is above league average with the pitch, giving him a trustworthy secondary pitch to pair with his devastating sinker.

Considering the changeup plays off the fastball, it’s not necessarily easy to have a much effectiveness with a changeup as a starter when you have a horrendous fastball, so it’s shouldn’t be altogether unexpected that the numbers aren’t strong here for the Pirates either. Fortunately, despite the negative numbers, they don’t look so abysmal in light of the league average as changeups have been pounded around the league in a truly unbelievable fashion. But it turns out that changeup fared even worse last season.

Anyways, Williams struggles here are difficult to discern since the pitch is so frequently out of the zone, but with the fastball thriving, it’d be potentially good to tinker with it at the break. Such is not the case with Kuhl who has a miserable changeup that he tosses roughly 11 percent of the time. It ranks near bottom tier of starters, and even though he doesn’t toss a four-seamer, he has displayed similar velocity on his two-seamer as the normal four-seamer, creating a respectable 7 MPH average differential between his changeup and fastball, which leads you to believe that location or sequence could be the culprit given the knowledge that the movement is also a non-issue.

After barely tossing the changeup in the past, I outlined early in the season that Cole was tossing a thoroughly effective changeup almost ten more percent more often than he ever has, but it’s slowed down with the fastball imploding.  The inner connectedness of the two pitches will likely mean that solving the fastball problems will be paramount to the changeup being successful moving forward.

When I began this piece, I didn’t intend for it to devolve into a Gerrit Cole breakdown, but many of the notable issues center around him as his return to effectiveness would give the Pirates a strong front of the rotation in Cole, Nova, and Taillon.  Additionally, the pitch values tell us that Kuhl and Williams have not been effective because they’ve been pitching with only one successful pitch, which is surely glaring weakness for anyone in the rotation.

When All Star Break rolls in, there’s much work that needs to be done by the pitching staff and coaches if the Pirates have any hopes of closing the gap in the division.  This story is starting to sound vaguely familiar.