As a flurry of trade rumors continue to surround the surging Pirates, it’s becoming increasingly clear that Gerrit Cole is unlikely to be dealt at this year’s deadline.  That may be unsurprising given that the precursor to all this chatter was a Yankees’ “wish list” article, but it’s also because Cole has become one of the more enigmatic pitchers in baseball.

Some days, when Cole is on the mound, he resembles the burgeoning ace, who dominated the league with a 2.60 ERA and befuddled hitters with an electric fastball and a devastating slider combination, but on other days, he looks entirely too hittable for a guy possesses his repertoire and ability to hit triple digits.

Now, it was certainly the former case on Wednesday when Cole struck out ten Brewers, but is that something that can be expected to continue as the Pirates push for the playoffs?

Considering Cole has allowed four or more earned runs in five of his last eleven starts, including a trio of seven-run disasters, it’s a difficult question to answer, but I can that it will undeniably hinge on the effectiveness of his fastball.

Two seasons ago, Gerrit Cole thrived because his fastball was among the best in baseball, earning a Clayton Kershaw like 24.2 pitch value, but it isn’t even valued at one point for this season, which is about where it finished last season.  This declined success hasn’t been lost on Cole, because he altered his attack by decreasing his fastball usage from 66 percent to around 59 percent; however, the aforementioned results suggest that is hasn’t been the solution to his problems.  So what’s driving the poor results? 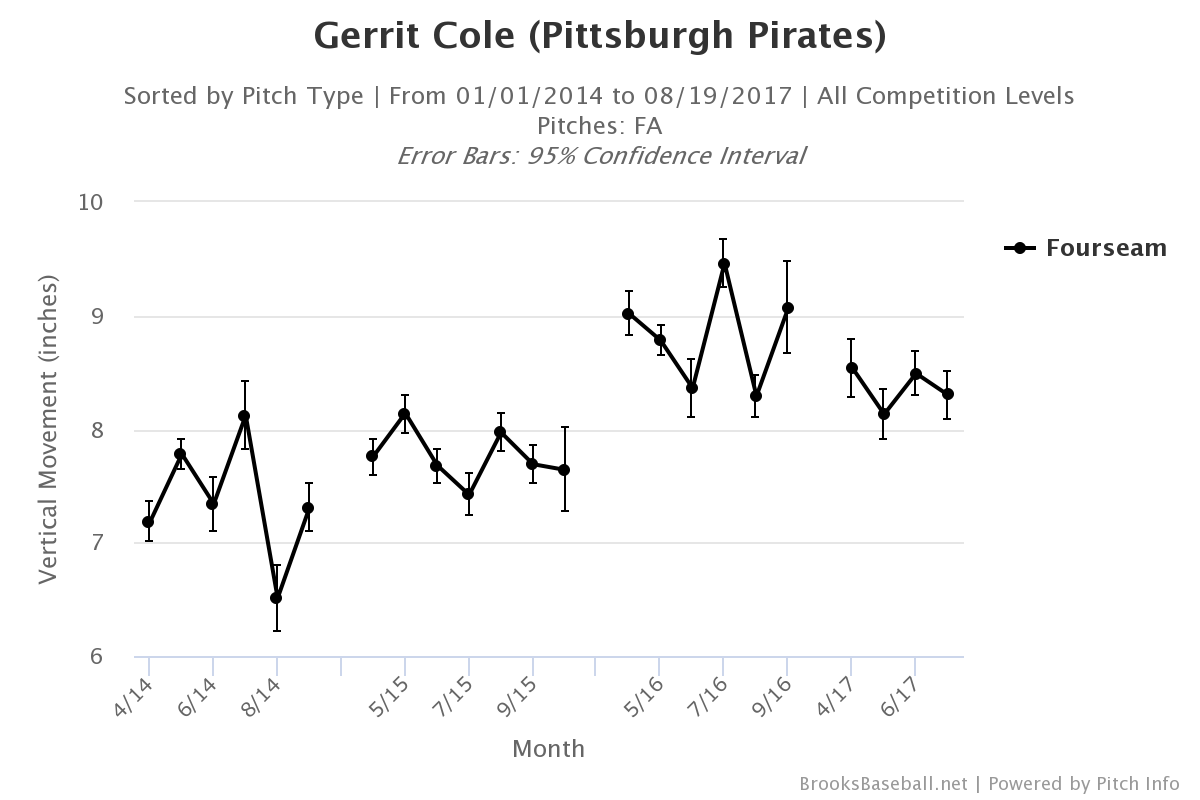 Writers and baseball pundits often point towards a loss of movement when explaining the struggles of a pitcher, but it is always the case that the player’s pitches have “less movement.”  Even though Cole has more movement on his fastball, he’s lost some of the late break on his fastball, meaning the movement is happening earlier in its trajectory and rendering the pitch easier to hit.

Earlier this season, Alan Saunders asked Cole a question about his mix of the four-seamer and two-seamer and Cole offered some commentary on the ball rising in the zone, saying, “Anybody can pitch upstairs if they know how to do it, but especially power pitchers have success doing that. More often that not, I feel like I’m trying to get the ball down…”

For a pitcher who tosses the heat that Cole has, this is not quite strategy you would expect him to take, but there seems to be acceptance that this is a problem with his fastballs.

Additionally, the four-seamer has on average had 2.7 more inches of arm-side movement this season compared to last, which has had a few repercussions in terms of his splits. 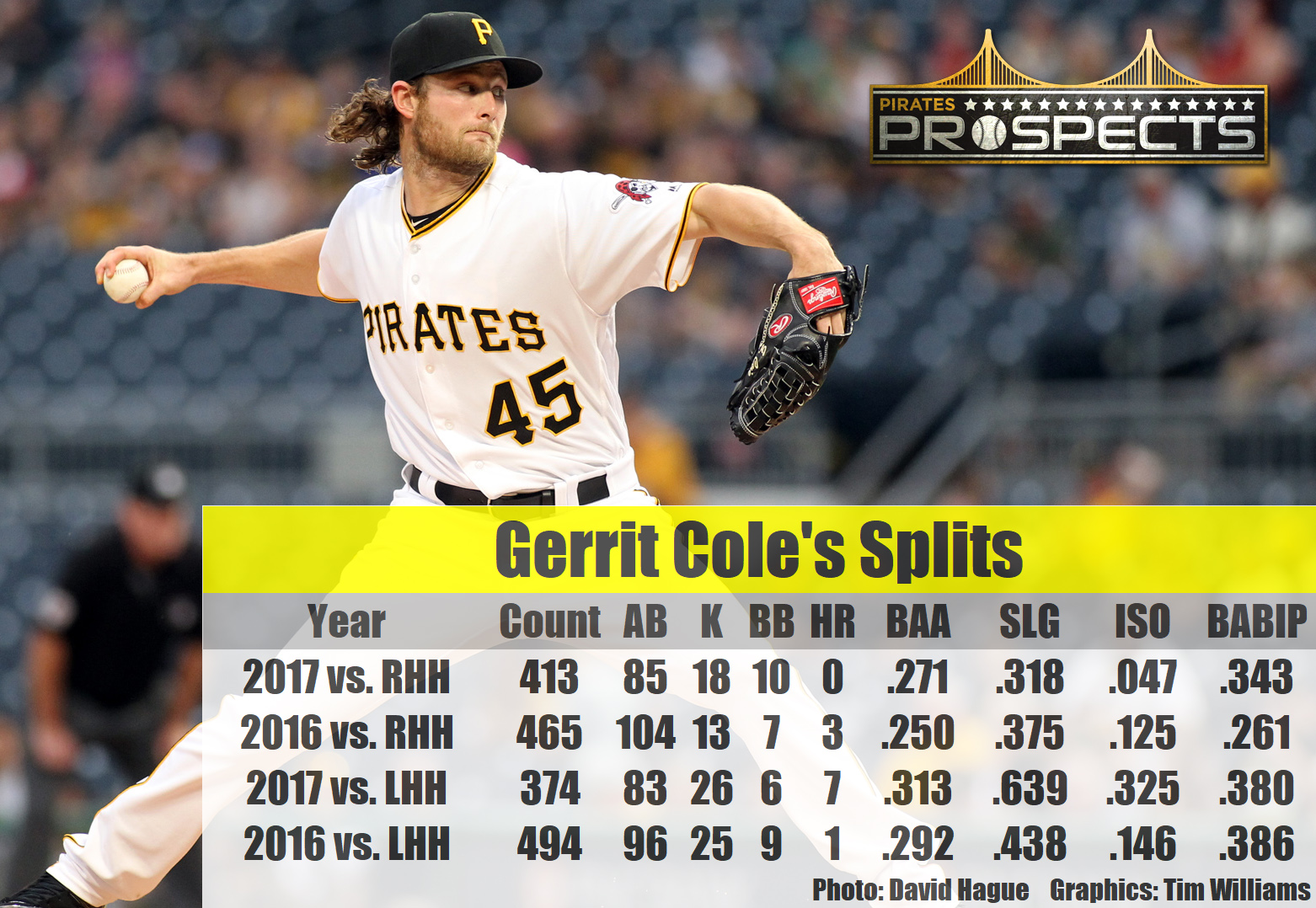 While the horizontal movement is helping combat damage by right-handers by running in on hitter, the home runs are coming from left-handers because an inside pitch on them is running back towards the middle of the plate.  Take a look at how the “vs. Left-Handers” Heatmap paints this picture:The added horizontal movement is making it very difficult for right-handed hitters, especially since their numbers are inflated by a high BABIP; yet, Cole has a considerable home run problem with the four-seamer against southpaws. In fact, his HR/FB+LD rate, after never being above 8 percent against lefties, is hovering around an absurd 20 percent. 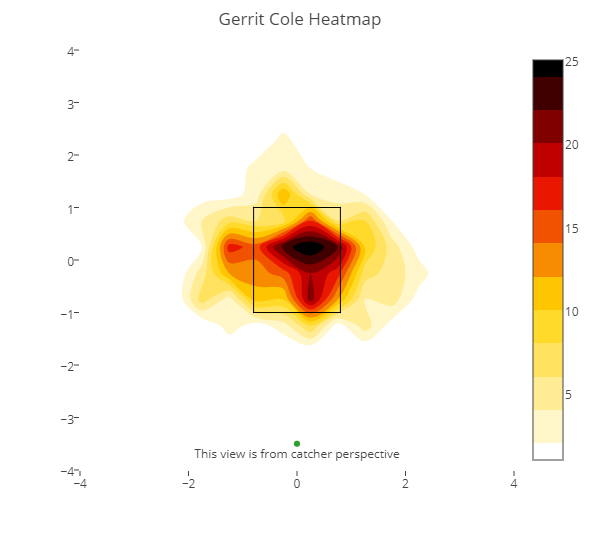 This is giving opposing hitters the ability to either drive it opposite field or square up for a deep hit to right field.  It is actually quite amazing that very few hits have traveled to right at all because this is not a typical spray chart for left-handed batters.

In throwing the fastball less, Cole started leaning on the changeup roughly eight percent more of the time against southpaws. Theoretically, this should have helped keep opponents off-balance, but it hasn’t consistently been able to do that. 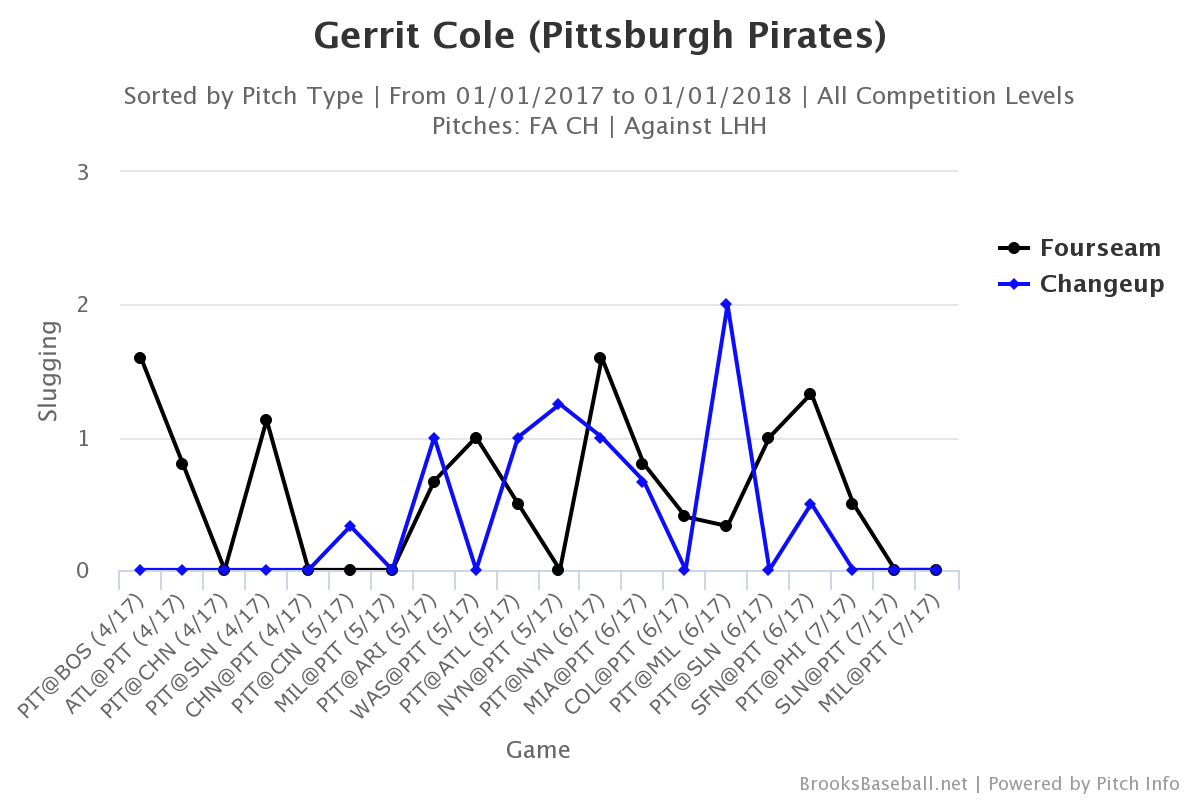 The changeup was stellar in his first seven starts, allowing zero extra base hits in six of the first seven games; however, it clearly became a liability from mid May to the start of July.  Considering both the velocity and the movement of the changeup have remained stable over the course of the season, it’s safe to assume that location and/or sequencing of the changeup and fastball are the culprits.  The fastball has been up or down regardless of the changeup, so we can’t say much more specifically about the causation of his fastball struggles.  (Although, it is worth noting that the four-game, 23 earned run stretch is the only time the changeup has been ineffective in consecutive games.)

It is disconcerting that two pitches have not simultaneously been successful this season in any sort of extended way, but this first time Cole’s career that the changeup has been a crucial part of his attack.  Thus, it could take him more time to work out some wrinkles, especially since this changeup, like his fastball, has 2-3 inches more of horizontal movement in 2017.

At not even 27 years of age, there is nothing wrong with Cole requiring more work to evolve and progress rather than depending on pure talent to rectify the situation.  Just expect him to continue honing his craft in a Pittsburgh jersey this season.