That said, it’s hard to not look at the early results from Mason Martin and dream about the Pirates getting a steal with their 17th round pick.

Martin was drafted out of high school, and given an over-slot $350,000 bonus. He was scouted and signed by Max Kwan, who also signed Gage Hinsz, the big over-slot prep player outside of the top ten rounds in 2014. Martin had a scholarship to Gonzaga, but ultimately decided to go pro.

“There was definitely a process of going through the pros and cons,” Martin said. “I’ve got a scholarship to Gonzaga in my back pocket, and they do a great job with left-handed hitters. I’ve got a great thing in the draft, too. Ever since I was a little kid, I wanted to play pro ball. If the situation wasn’t right, I wasn’t going to go. But it ended up working out. I’m glad I’m here.”

In making his decision, Martin talked to a few ex-professional players, along with a few current professional players. The biggest influence in his decision to turn pro was Mariners’ infielder Shawn O’Malley, who went to the same high school as Martin (before Martin went there), and who Martin developed a good relationship with.

“He kind of laid out the facts for me about pro ball and if I really wanted to do it,” Martin said. “He was in the minors for nine years. Nobody better to tell you than that guy. I’m glad I talked to him, and he really helped me in the process.”

The decision to turn pro seems to have been the right call, based on the early results. Martin is currently hitting for a .413/.542/.978 line with seven homers in 46 at-bats. He has as many home runs as the entire GCL Tigers East roster, and three more homers than the GCL Mets. He currently leads GCL hitters in average, OBP, slugging percentage, OPS, and home runs.

The home run total is bordering on historic levels for the Pirates’ organization. The GCL Pirates have been around for 50 years now, and only three players have hit more home runs than Martin. Only four other players have hit as many home runs as Martin. 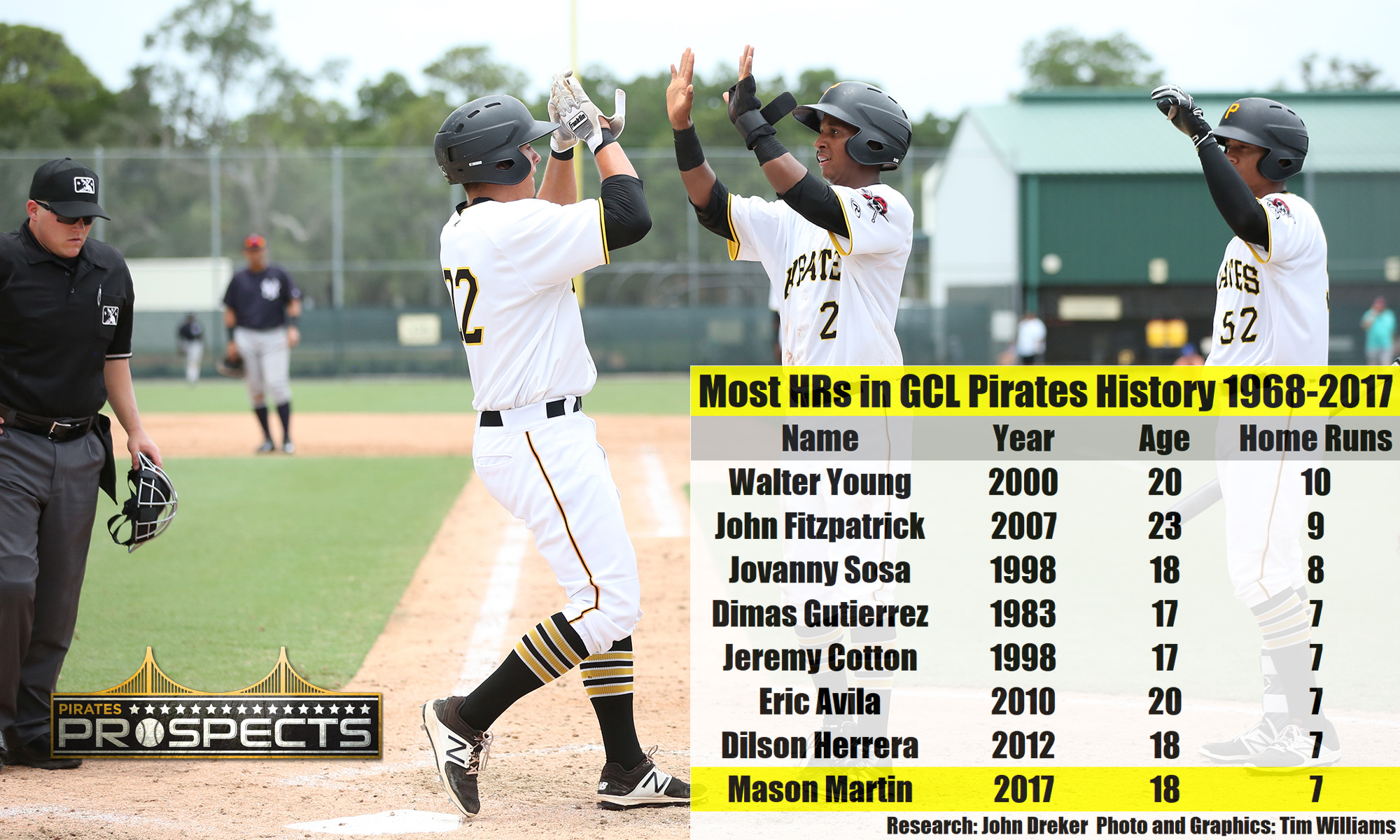 A quick look at that list will show that there’s not a strong correlation between hitting a lot of home runs in the GCL, and going on to become solid MLB players. Walter Young and Dilson Herrera are the only two from the list who made it above Double-A, and who made it to the majors. Young only had 37 plate appearances, while Herrera could have an MLB career ahead of him.

There are reasons to continue dreaming on Martin, and to think he might be an exception here. I covered Avila and Herrera, and both were small infielders. Neither player had the frame to expect a lot of future power. Herrera’s power was good for a middle infielder, but he didn’t have the power for a corner spot.

Martin does have the frame for future power. It hasn’t always been that way, though. He added 10-15 pounds with a new workout plan that he started at the end of his junior year for baseball. The plan was given to him by his father (and Pirates Prospects subscriber/commenter), Chad Martin.

“My dad is a professional natural body builder, and he gave me a new workout plan,” Martin said. “I was just in the weight room busting them out throughout the whole winter. Took me about seven or eight months, but I trimmed off a lot of baby fat and added a lot of muscle. I’m really happy with how that went. That definitely helped with my power, my speed, everything. I just became a better athlete, period. It’s been really helpful for me.”

VIDEO: #Pirates 17th round pick Mason Martin hits ANOTHER home run. Now has 6 on the season.

The difference in the workouts was that Martin focused on isolating body parts during each workout. Prior to that, he had a full body focus when he was younger. The new workout helped him beyond his offense by making him more versatile on the field.

Martin started out as a shortstop in high school, then moved to third base. He moved to first base after that, but after getting faster following the new workout plan, he was able to move to the outfield. The Pirates drafted him as an outfielder, although he’s spent most of his time at first base, and was working at the position with Pirates’ infield coordinator Gary Green last week.

“As of right now, I might end up playing a little bit more first base,” Martin said. “They don’t want to rule out any options. I want to be as versatile as possible, just because I want to keep my bat in the lineup.”

The Pirates have a history of moving players to more difficult positions, so it’s not out of the question that they could try Martin somewhere other than first base or right field. But right now, he hasn’t been told anything about that, and doesn’t anticipate playing third.

“Third base could be an option, but I don’t foresee myself playing there very much,” Martin said. “I’ll probably be sticking to first base and right field right now.”

Martin does look like he needs some work at the position. I was surprised to find that he was a natural infielder who moved to the outfield, rather than the opposite, just because his work at first base looks more like what you’d expect from an outfielder making the transition. His value will probably end up being more offensive driven, and he has the raw power to be a corner player.

As for the offense, there are some red flags for Martin, specifically the strikeout issues. He has a 28.3% strikeout rate, along with an 18.3% walk rate. In watching him, I’ve noticed that he takes a lot of pitches and works into deep counts. He may end up being one of those players who is too selective, laying off pitches that are hittable early in the count in order to look for that perfect pitch later. The Pirates have had some players like that in the past, with the most extreme case being Max Moroff. Martin brings more raw power to the table, but might have to make some adjustments as he moves up, getting more aggressive in order to continue hitting for average.

The performance so far from Martin has been encouraging, and definitely something to dream on. I could see him playing in West Virginia next year, since the Pirates typically give that aggressive promotion to their prep hitters, and Martin has shown that he should be following that same path. We’ll probably get a better idea of his offensive upside after a full season in Low-A ball. For now, the early results are obviously exciting, and the raw power, hitting skills, and the build provide some promise for the future, enough to make Martin one of the biggest guys to focus on in the lower levels over the next few years.