Regardless of how you feel about the trades, the end result was that moving McGuire and Gushue opened the door for playing time for two other catching prospects in the system — Jin-De Jhang and Christian Kelley.

Jhang has been on the prospect radar for a few years, but has been stuck behind McGuire the entire time. With McGuire gone, Jhang was able to finally get a starting workload, rather than splitting time between being a backup and a DH.

Kelley was drafted in the 11th round in 2015, and really came onto the radar last year, showing off solid defense in West Virginia, while also showing some potential for offense. It’s not a surprise that Gushue was moved in favor of Kelley, since the Pirates promoted Kelley to Bradenton at the end of last year, and had him taking starts from Gushue.

I had a chance to catch up with both catchers recently, looking at their progress this season, and how they are handling the starting roles.

The biggest focus for Jhang has always been his weight and training. When he came into pro ball, he didn’t look like a guy who would be able to stick behind the plate, due to his size. Here is the earliest photo we have of him, taken in Spring Training 2012. 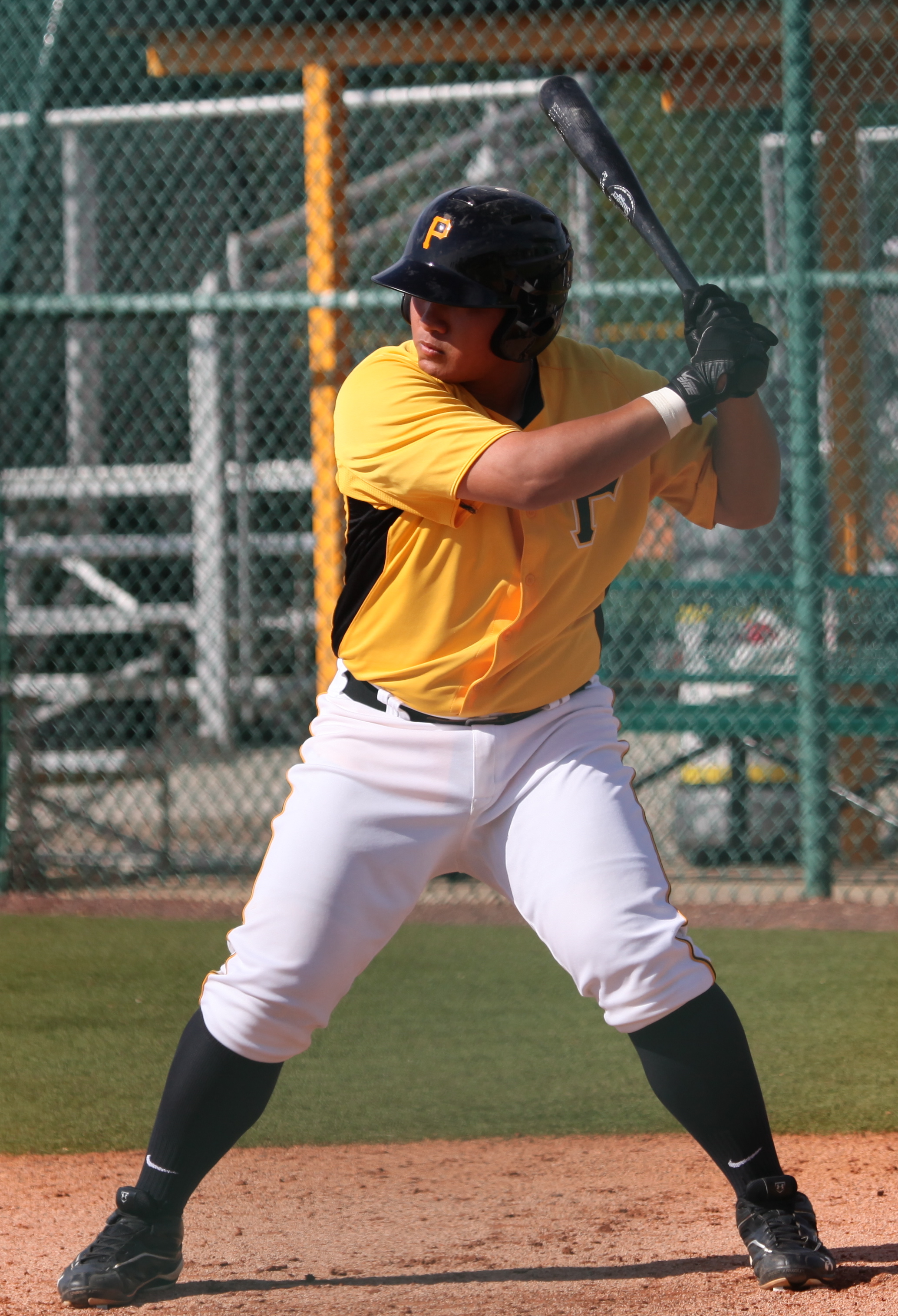 By comparison, here he was during Spring Training this year. 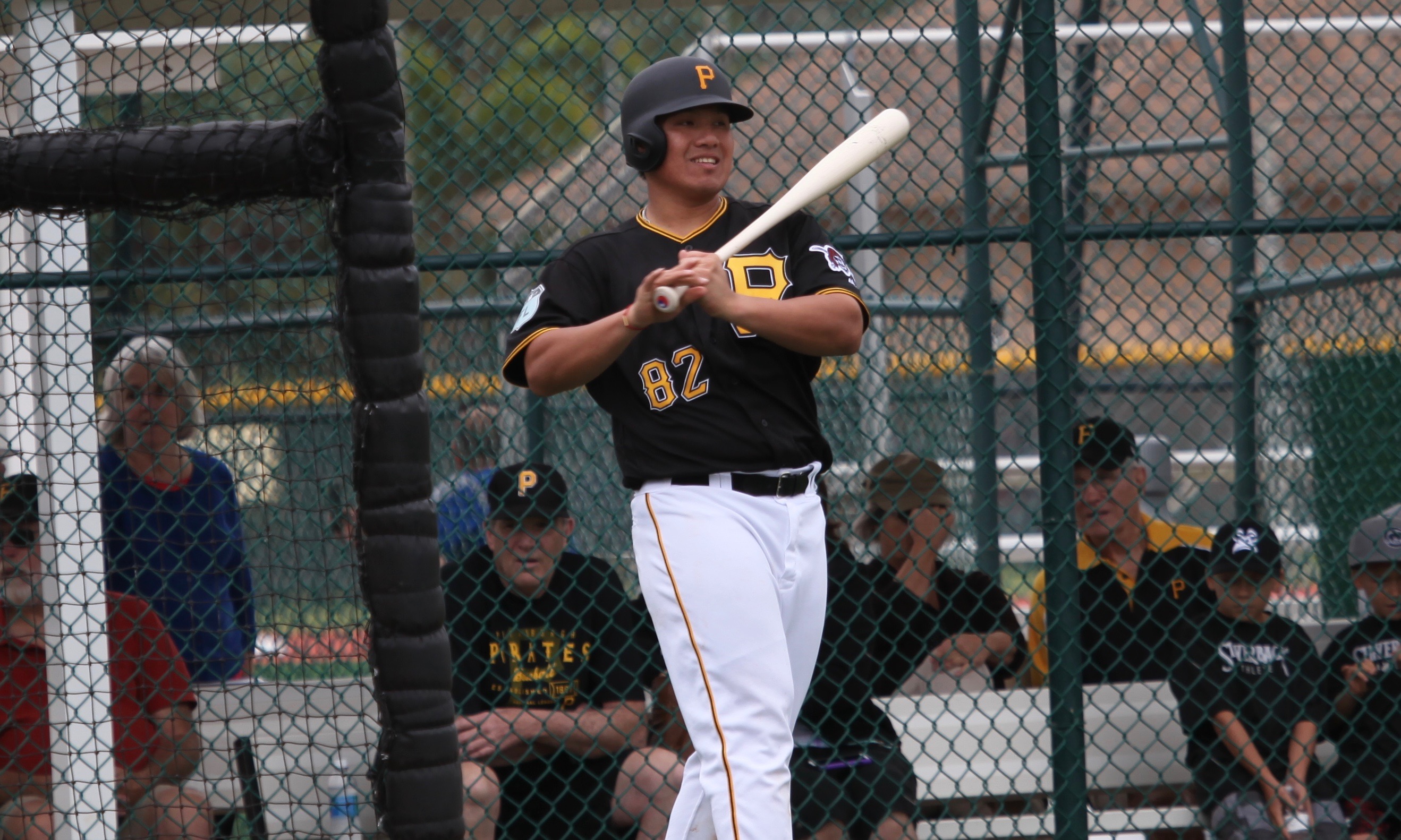 Jhang, who goes by the nickname “Johnny”, is still a big guy, but he’s in much better shape now than he was when he first entered pro ball.

“We do such a good job as an organization of supplying these guys with the right information,” Altoona manager Michael Ryan said. “Our strength department does a good job individualizing each workout. Johnny, because of the trades we’ve had with catchers in the organization, I think he needed to do a little more with his body, because he knew he needed to be catching a lot more. Credit to him. It’s been working for him. He’s more flexible back there. He’s been blocking a couple of balls that he may not have a few years ago, and he’s doing a great job.”

Jhang said that he feels stronger and more loose, and has noticed the difference in his blocking and footwork. He was always surprisingly quick and agile for his size, but maintaining his weight has only helped.

That was a key focus for him as he became a regular catcher. Those duties typically come with a workload that sees a catcher starting three days in a row, then getting one day off. Jhang said that it feels just like normal, and Ryan hasn’t noticed any issues.

“I don’t see any fatigue or that it’s affecting him,” Ryan said. “He looks normal each day. Even on the third day of his three that he catches in a row, he looks the same.”

Another key for Jhang has been his comfort with the English language. Signing out of Taiwan, Jhang wasn’t always strong in this area. He made quick improvements, to the point where the Pirates trusted sending him to Morgantown in 2013 without a translator. He always had a feel for the baseball lingo, but has expanded that in the last few years, only helping his relationship with his pitching staff.

“It’s kind of more comfortable, because I can speak more English,” Jhang said about the relationship with his pitching staff. “We can have more conversations.”

“I think that’s the key with the language now,” Ryan said. “He can honestly communicate with the pitchers, and he can understand with conversations in between innings on what pitchers want to do, and he applies it. I think it’s a huge step for him and his career. It’s not a coincidence that he’s developing into a better catcher because of the way he can communicate with our guys. It’s huge for him.”

The one downside this year has been his offense. That has always been a strength for him, but he has only managed a .439 OPS on the season. He had a .721 OPS last year in Altoona, and has shown good hitting tools throughout his career. That has even been the case when I’ve seen him this year, even though the numbers don’t reflect it.

Jhang went to big league camp this year, where he didn’t receive a lot of at-bats. He was injured toward the end of that time, and missed his regular Spring Training. After a brief rehab from his oblique injury, he returned to Altoona on May 20th. I think it’s more likely that this impacted his offense, rather than the alternative that he just forgot how to hit — which doesn’t match up with the skills he shows at the plate.

The offense is still what will drive Jhang’s value, but he has gotten to a point where he’s a strong enough defender to stick at the position and provide defensive value behind the plate. That will only improve now that he’s getting more experience with a starting role.

From the time he was drafted, Kelley stood out for his defense. He had some offensive abilities, but they lagged behind the defense. This year, he has been focusing on a few offensive changes, and has been seeing better results.

“I kind of toned that down a little bit, and it’s helped me with my timing,” Kelley said. “The leg kick is making me get ready earlier, and then toning it down was allowing me to be on time a little faster.”

Kelley isn’t exactly lighting the world on fire with his offense, but is showing a lot of promise. He has a .266/.374/.335 line, with the average and OBP being above-average for the pitcher friendly Florida State League. The one thing that has been lagging behind is his power.

Kelley shows some power potential, with the chance for double-digit home runs if he can eventually apply his power to games.

Overall, it’s a surprise that Kelley has had any time to focus on his offense with the pitching staff he’s had to work with in Bradenton. That staff is highlighted by Mitch Keller, the top pitching prospect in the system, along with Taylor Hearn and Gage Hinsz, who are also top ten prospects. It has also included Dario Agrazal, Pedro Vasquez, Cam Vieaux, and hard throwing reliever Jake Brentz.

“Honestly I’ve thought about [offense] less than I ever have, just because of the staff we have,” Kelley said. “Maybe that is what has been helping me. I’ve been given the opportunity and challenge by the organization to catch all of these great arms that we have. It’s a lot of future big leaguers. I’m more focused on catching those guys than I am on the hitting.”

You almost feel sorry for Kelley during some stretches when considering the velocities with this team. Keller, Hearn, and Hinsz can all sit mid-90s or higher, and usually line up three days in a row. In fact, the team jokes about how opposing teams will react to seeing those three. Earlier in the season, Agrazal added another guy who brought mid-90s heat. Vasquez has bumped his velocity up closer to the mid-90s lately. And then when Brentz would come in pitching out of the bullpen, you had a lefty who sat 97-99, hitting 100.

“Oh man, they’re making me work,” Kelley said of the staff. “They can pound the bottom of the zone for strikes and working to get under it, it’s fun.”

A big thing that stands out with Kelley’s defense is his leadership over the pitching staff. That will be valuable as he continues moving up with this group, and will help the transition one day if he arrives in the majors with the group.

Catchers of the Future

If I’m picking a catcher currently in the system who can take over for Francisco Cervelli, I’d go with Elias Diaz. But Jhang and Kelley could both emerge as future MLB catchers. I think the upside with each guy is a backup, although I can see a path for each guy to be a starter. For Jhang, that path involves maintaining his offense in the upper levels, while continuing the improvements he’s made with his defense and conditioning. That’s not an easy path, and it seems much more likely that he ends up a backup. For Kelley, the defense is there, but he’ll need to find a way to get his power more consistently into games. He’s got an easier path to being a starter, since there is less to work on defensively.

I don’t think the catcher trades from last year were made specifically to free up space for Jhang and Kelley, but I also think the Pirates were comfortable trading from their catching group, knowing that they still had these two to provide some depth.