Jameson Taillon Struggles in Pirates’ Loss to the Cubs

PITTSBURGH — Jameson Taillon wants to keep pitching, but how much longer the Pirates will be willing to accommodate that request may be up in the air, particularly after his outing on Thursday, when he gave up six runs on 11 hits in 4.2 innings in an 8-2 loss to the Chicago Cubs.

It’s not just the line. After all, the Pirates have committed to playing their younger players at the expense of trying to maximize their wins down the stretch and while Taillon has more experience than many of the other players on the roster, he’s still just 25 and has just over 200 innings in the majors.

But Taillon fell short of being competitive against the Cubs. He allowed the leadoff hitter to reach base in three of his four innings. Of his 11 hits allowed, six went for extra bases. The problem didn’t seem to be command, as 53 of his 78 pitches went for strikes. He was simply too hittable on a wet night when fine control may have been challenging.

“He had stuff, but he wasn’t as sharp with the execution and location of pitches,” manager Clint Hurdle said. “He made some mistakes up with runners on base. That was the biggest change. Some of the curveballs and changeups were up in the zone.”

Taillon agreed and said that though he wasn’t wild, he didn’t have the fine command he’s accustomed to inside the strike zone.

“I’d say a majority of them were misses in the strike zone,” he said. “At this level, it can be something that’s five inches away from where I wanted to throw it, but that makes all the difference in the world. Five inches can be the difference between the barrel and the handle of the bat.”

The Pirates have Steven Brault, who pitched on Tuesday and Tyler Glasnow, who started for Indianapolis Friday, as other options if they want to skip a start or shut Taillon down outright. Taillon had said earlier in the week that he wanted to finish the season in the rotation, but seemed opened to discussing other strategies going forward.

“It’s something we’ll have to talk about and see their reasoning and talk about what they’re seeing and what maybe could help me,” he said. “It’s a conversation we definitely have to have. If they think something else will help me a little more, I’m open to it.”

Here’s more from Taillon on his “frustrating” performance:

“I’m sure he would have taken less, but it’s really nice when you can hit something off the wall where it’s got a little air to it and you get to run. The guys have been pulling for him.” — Hurdle on Chris Bostick getting a double off the Clemente Wall as his first major-league hit. 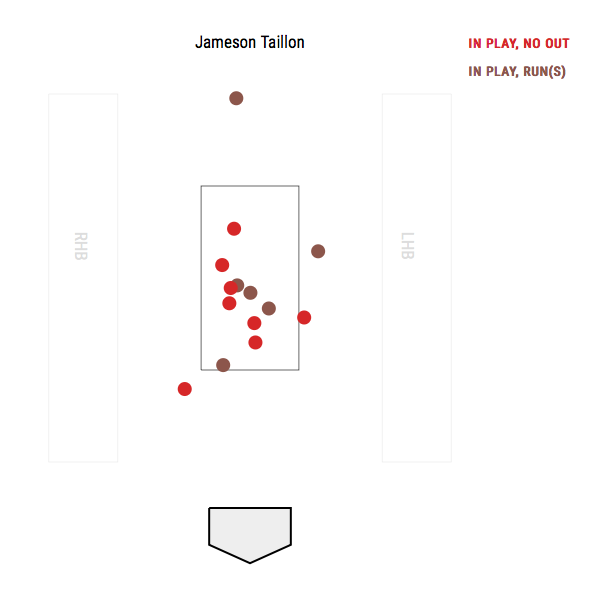 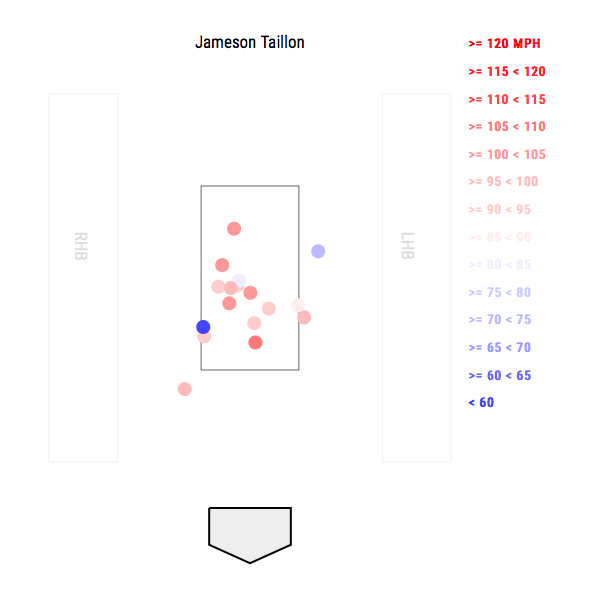 Taillon’s misses in the zone led to some hard-hit balls and very little weak contact, even on a rainy night

***Angel Sanchez continued his struggles with the long ball, giving up a two-run home run to Albert Almora.

Sanchez finished with 2.1 innings and Amora’s homer was the only hit he allowed. He’s now thrown 7.1 major-league innings and has allowed 11 baserunners for a 1.500 WHIP. But eight of his 11 baserunners have scored thanks to five home runs, which have ballooned his ERA to 9.82.

It’s probably not all Sanchez’s fault. An astonishing 38.5 percent of his fly balls have left the yard.

***Bostick’s first big-league hit couldn’t come at a stranger time. With one out in the ninth and the Pirates trailing by six, the rain intensified into a steady downpour.

“I was walking to the plate thinking, ‘what a way if this happens,’’ he said. “It’s pretty cool. … Good to just get one. It hadn’t been too long. But I’m sure everybody else feels the same pressures. You get up here and you want to get one out of the way first so that you can kind of
relax and just do your thing.”

More from Bostick on his exciting night;

***Josh Bell and Jordan Luplow each had an RBI. After Bostick’s double, the Pirates loaded the bases in the ninth, bringing Bell to the plate with two outs. He grounded out to the pitcher to complete and 0-for-5 night. Over his last 10 games, Bell is 6 for 35 (.171).