Action from the last three days of winter ball below. There were no games of interest on Monday. Seven Pittsburgh Pirates were still playing as of Tuesday, though one saw his season end that day.

In game three of the Venezuelan league finals, Elvis Escobar went 1-for-4 with a solo homer in his team’s 8-3 win. Going into the eighth inning, Lara trailed 3-0. Escobar hit the second of three solo homers in the inning to tie the score. It was his first home run in 69 games this off-season and it came off of Logan Darnell, a southpaw (Escobar bats lefty) with Major League experience.

In the opening game of the Dominican league finals,  Richard Rodriguez threw a shutout inning, giving up one hit, while striking out two batters. His team took game one by an 8-1 score.

In Puerto Rico, Hector Quinones threw two shutout innings, retiring all six batters he faced. This game ended his winter, as his team was eliminated from the playoffs. Quinones threw a total of 5.1 shutout innings in his last three appearances, allowing just one hit. Batters hit .143 against him this winter, though he struck out just one of the 32 batters he faced. He finished with a 3.38 ERA and a 1.00 WHIP in eight innings over five appearances.

Elvis Escobar went 0-for-2 before leaving for a pinch-hitter in the seventh inning. He picked up an outfield assist by throwing a runner out at home, but his team dropped the game by a 3-2 score, tying the series up 2-2.

Richard Rodriguez worked out of a little trouble to throw a scoreless inning in his team’s 8-4 victory. He gave up a double and hit a batter, but held a 5-4 lead while picking up a strikeout.

In Venezuela, Elvis Escobar went 2-for-4 with two singles, a run scored and an RBI in his team’s 5-2 loss. Through five games in the finals, he is 6-for-17 with two doubles and a homer. His team is down 3-2 in the seven game series.

The final week of the Australian Baseball League’s regular season began on Thursday with three Pittsburgh Pirates on teams fighting for the last playoff spot. Michael Suchy, Connor MacDonald and Sydney are still alive in the playoff fight after a 9-7 win. Suchy extended his on base streak to 22 games in a big way, going 3-for-5 with his 13th double, an RBI and two runs scored. He is now hitting .317/.393/.579 through 35 games.

MacDonald went 1-for-4 with a three-run homer off of former Pittsburgh Pirate minor leaguer Nick Hutchings. As you likely know by now, the Pirates signed MacDonald to a minor league deal as a pitcher earlier this month. The homer was his tenth of the winter and he also added a throwing error, his first of the winter.

Sam Street pitched a scoreless ninth inning in his team’s 9-2 win. He set down the side in order, including a ground out to shortstop from Robbie Glendinning for the second out (see proof below). Street has a 3.38 ERA over 10.2 innings and eight relief appearances this winter. He has a 1.03 WHIP, a .205 BAA and 12 strikeouts. 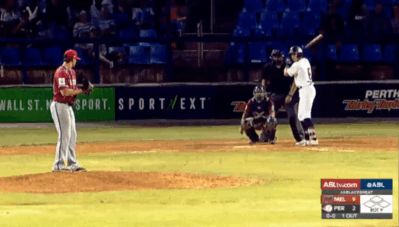