BRADENTON, Fla. – Luis Escobar definitely has the stuff to be a Major League pitcher in the future. He’s got a fastball that can sit in the mid-90s and touch higher. He’s got a hammer curveball that can be a plus pitch when it’s on, and can generate strikeouts. And he’s got a changeup that has shown a lot of improvements over the last few years, giving him a third weapon.

The big thing holding him back is his control. Escobar had a 4.1 BB/9 last year in West Virginia, which put a damper on his dominant 11.5 K/9. So it was encouraging to see him make his season debut with no walks over five innings, giving up just one run in that outing on Sunday.

“I saw confidence from Escobar,” Bradenton manager Gera Alvarez said after the game. “I saw him get angle on his fastball, he was aggressive with it. No walks today, which was impressive coming from a guy who can be all over the zone.”

Escobar has been working on his mechanics a bit since the offseason started. The adjustments are smaller, like making sure he doesn’t rush through his delivery, and making sure he keeps his glove arm up and in line with the plate, rather than dropping it down and away toward first base, which leads to him flying open and sailing pitches.

The Pirates have him working on that, but they also want him to be aggressive, using his stuff to attack hitters.

“I think more than anything, the mentality of being more aggressive in the zone,” Alvarez said of the big thing for Escobar to work on. “Trusting that his ball is tough to hit, trusting that his curveball will get outs. I think he’s doing a good job of it, and today was a perfect example.”

It was a great season debut for Escobar. The question is can he repeat that going forward?

I talked with a scout who was in attendance for the start, and the scout felt that Escobar could be a really good reliever in the majors, but that he doesn’t look like a starter in the long-term. The reason for that was his control issues, stemming from his mechanics.

One thing that Escobar hasn’t been working on, which the scout brought up, was his tendency to move his head out of the way to clear a path for his arm. That can make things difficult to repeat mechanics. Here’s a photo of the issue: 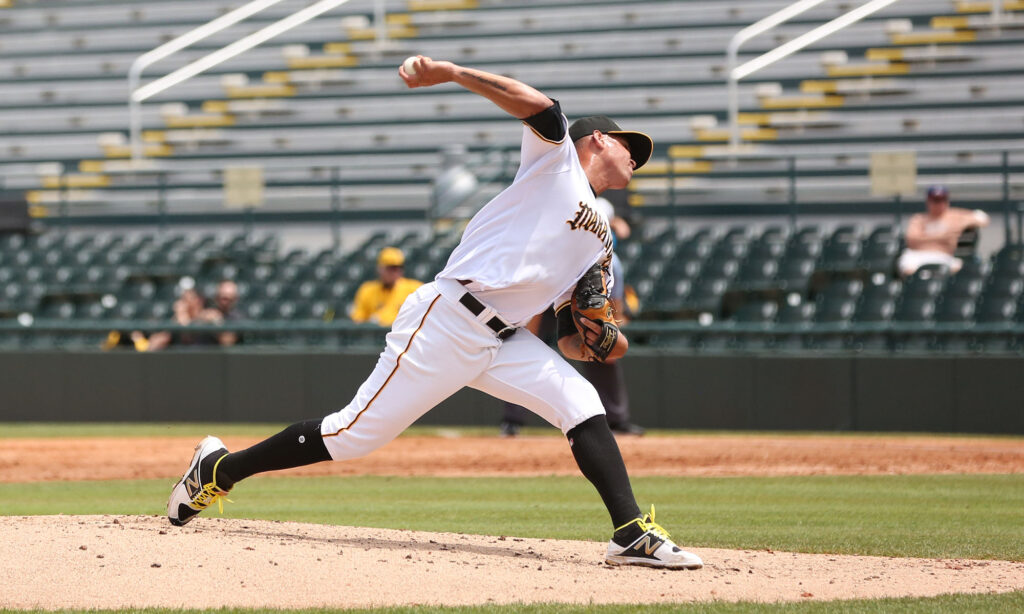 Here’s another from the front: 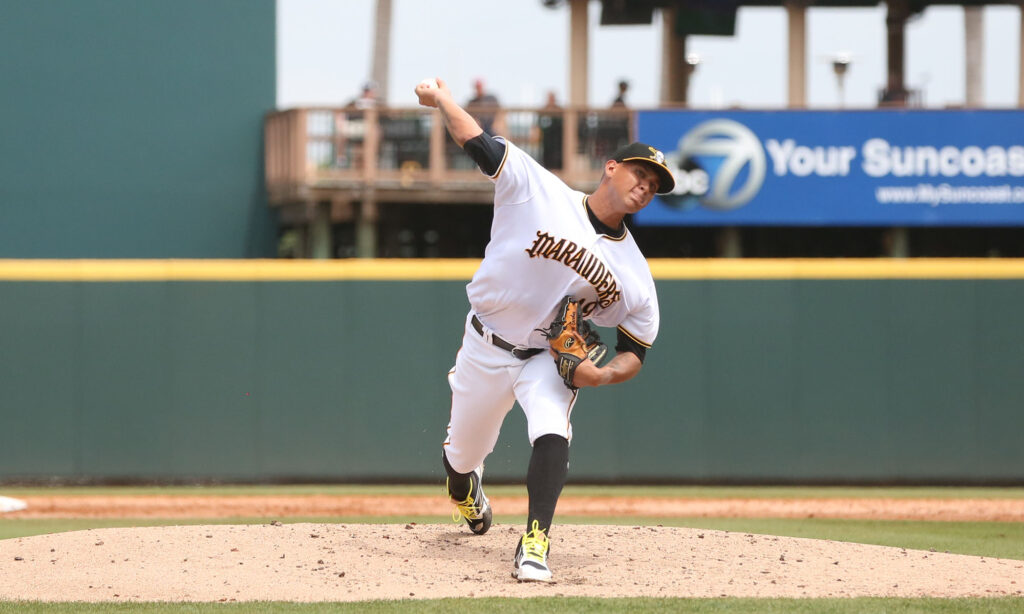 Prior to that head tilt, Escobar’s body is sideways and in line with the plate, as seen here: 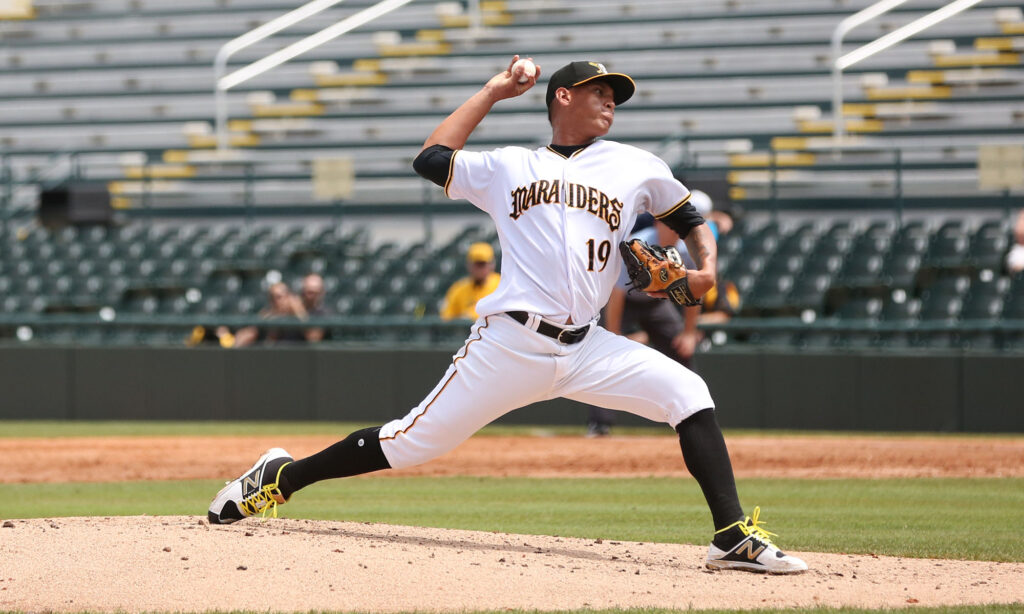 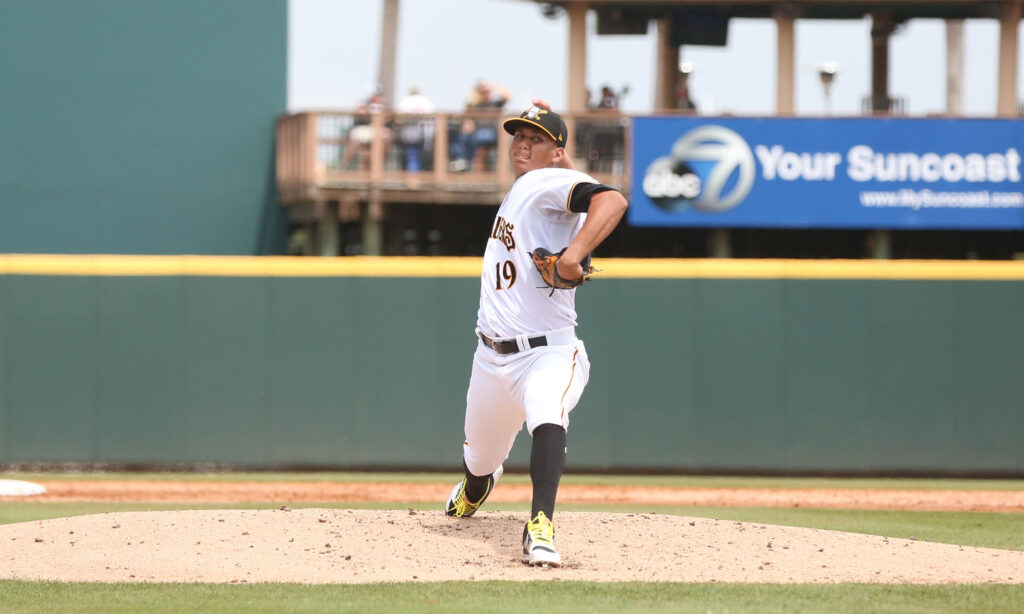 You can imagine how difficult it would be to maintain consistent control of your pitches when the top half of your body is tilting to the side while you throw. Escobar’s overall movement is toward the plate, but it’s not entirely straight forward.

This is something I’ve noticed in the past about Escobar (it’s hard to miss when processing photos of him, as you can tell by the images I already had before talking with the scout). He also has a low crouch earlier in his delivery which can be difficult to repeat.

I don’t expect the Pirates to overhaul Escobar’s delivery, especially when he’s doing so well in the lower levels. He’s got the stuff to be a lite version of Tyler Glasnow, with a lot of control problems that get disguised by his ability to dominate lower level minor league guys with his fastball and curveball. The problem is, he will probably run into a situation in the future where he struggles in the upper levels, with the control being too much of an issue.

At that point, the Pirates will have to decide whether they want to make some adjustments — perhaps dropping his arm slot to three-quarters to avoid the head tilt — or whether they want to just convert him to a reliever and hope the shorter outings minimize the control issues.